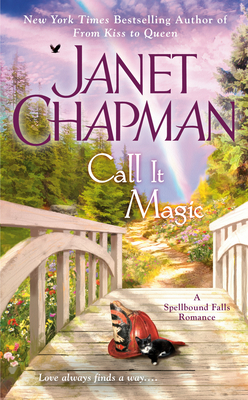 Welcome back to Spellbound Falls, Maine where love is the greatest magic of all...

Katy MacBain moved to Spellbound Falls with secrets she plans to keep. The newest member of the Fire and Rescue Team, she disappeared for three weeks before arriving on the job. She doesn't understand why Gunnar Wolfe the town's interim fire chief and her boss seems determined to uncover the truth of what happened to her during that time. Or why she's more attracted to him than she's ever been to any other man.

A confident firefighter, Gunnar Wolfe doesn't give up and he's resolved to find out what's wrong with the mysterious and beautiful Katy. Since she is the newest member of his team, he's naturally protective of her, but he's surprised to find himself captivated by the tenacious and talented woman who is so...magical.

My Thoughts:
Gunnar Wolfe had been looking for Katy McBain at the request of her best friend, Jane, after she went missing after her wilderness rescue course for three weeks. He found her but doesn’t know why she went missing.  After becoming fascinated by Katy in his effort to find her, Gunnar maneuvered things so he could be working on the same fire team as Katy as she’s set to start a new job as a paramedic in the small Maine town of Spellbound Falls.

Katy doesn’t want anyone to know what happened after finishing her wilderness rescue course, and she’s been avoiding her best friend’s calls.  There’s no better place for her to cleanse her soul than the magical place of Spellbound Falls, starting a new job she’s meant for.

Call it Magic was my first book by Janet Chapman, and I later found out it’s her last book. I think I would’ve benefited by reading the previous books in this series as I felt a little confused at times since there’s mention of past events and couples, as well magical elements that weren’t recapped in this installment. However, I still enjoyed the story and I plan on starting at the beginning, since I really like Ms. Chapman’s writing.  The romance between Gunnar and Katy was nice and steady, and chemistry filled. While a sensitive subject is tackled, Highlight to view spoiler: the reason for Katy going missing, it happened off page, in the past where Katy only recollects parts, but End of spoiler Katy deals with it by eventually confiding in a couple of people and getting support. I didn’t feel like it overwhelmed the story or made it a harrowing experience to read, and I think it’s because Ms. Chapman specially tried to keep things positive. I love what she said at the end in a letter to her readers: “I don’t care to read, much less write, emotionally draining stories. That doesn’t mean I shy away from the more serious subjects; I simply prefer to use levity to inspire hope.”

A lot of the story focused on Katy becoming part of the fire team as a paramedic, her powers, and getting to know and fall for Gunnar. The small-town setting of Spellbound Falls sounded beautiful and enchanting.  There are several fun secondary characters, but I really loved Shiloh, a nine year-old-boy, Katy met on the plane on the way over to Spellbound Falls. They strike up a friendship that continues throughout the story. I think fans of the series will love the last installment. I’ve already downloaded the first book to enjoy the series from the beginning!