Audio Review: A Change of View by Freya Barker 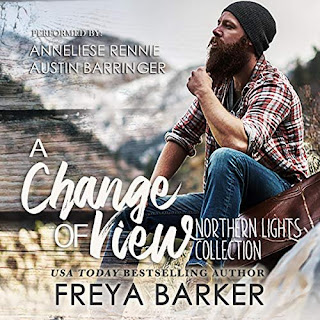 A Change of View (Northern Lights #2) by Freya Barker

What if one morning you look in the mirror and no longer recognize the person looking back?

When Leelo can no longer identify herself by the roles that once defined her, it's both terrifying and liberating. Oh, she feels the loss, the grief, and then the anger, but when she inherits property up north, she jumps at the promise of freedom and independence.

Yet not everyone in her new community is what they seem, starting with the surly mountain man down the road.

As owner of the local fishing lodge, Roar is content with his everyday life. And the older he gets, the less he appreciates change. So when a blue-haired, tattooed ‘city girl’ moves into the old motel, shaking up his daily routine, he’s none too pleased.

Still, something about the woman’s easy smile and almost reckless grit has him step up as her keeper.

My Thoughts:
Leelo inherits a lodge/cabin rental property in Northern Ontario and decides to move up, renovate, and make a new life. She needs the change in scenery after a bitter divorce, but tackling the property updates proves harder than she bargained for. No worries, her growly neighbor Roar has taken upon himself to help out.

Roar owns the lodge up the road and so when he sees Leelo up on the roof on one of the cabins trying to repair damage during a thunderstorm he goes off on her for her recklessness. A dressing down that Leelo doesn’t appreciate, but he does help, and even with his gruff nature, it’s not long before sparks ignite between the two of them. However, they must fit in their romance between the dangers that come from someone trying to sabotage Leelo’s efforts to get her lodge up and running.

I got a definite Kristen Ashley vibe here with a bossy alpha male determined to protect, niceties be damned. Roar was a sweetie, but he was very direct and concise.

Leelo was a bit of a prickly pear at first, not taking to kindly to Roar’s take-charge attitude, but I could see where she was coming from after being walked all over by her husband and taking it for years. The divorce did some damage to her relationship with her kids, but I got that, too. I’m sure it’s hard when you’re going through hell not to complain about your cheating ex, but I was glad to see Leelo get a handle on that, rise above and be the bigger person.  It made a huge difference with her kids, and I loved seeing them mend fences and draw close.

A Change of View is the second in the Northern Lights series I’ve listened to by Freya Barker and I think I liked this one a little more than the first. I liked that it was a romance featured a mature couple, both are in their 40s.  It’s not necessary to read the first book, because they are completely unrelated other than maybe a similar location? Which sounded beautiful! Rustic cabins in the forest with lake views? I’m ready to head there now.

I listened to the audio book and enjoyed the performance. Austin Barringer narrated Roar’s chapters, and I enjoyed his rough, masculine voice. He did well with the female parts, too. Anneliese Rennie performed Leelo’s chapters, and she did well, but I did think her voice sounded a little older than Leelo’s age and maybe not particularly feminine. Not sure what it was, but I got used to her as the book went on.

The e-book is available through Kindle Unlimited.

Posted by Rachel @Waves of Fiction at 9:12 AM