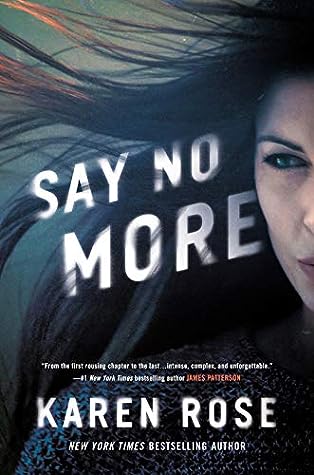 Mercy Callahan thought she'd escaped the cult decades ago, but its long fingers are reaching out for her again in this electrifying novel in the Sacramento series..

Seventeen years ago. That was the last time Mercy Callahan saw Ephraim Burton, the leader of the twisted Eden cult where she was raised. But even though she escaped the abuse and terror, they continue to haunt her.

When her brother Gideon discovers new evidence of the cult's—and their victims'—whereabouts, Mercy goes to Sacramento to reconnect with him. There, she meets Gideon's closest friend—homicide detective Rafe Sokolov. From Rafe, she receives an offer she never knew she needed: to track down Ephraim and make him pay for everything.

But Ephraim, who had thought Mercy long dead, discovers she is in fact alive and that she is digging around for the cult's secrets. And now he'll do anything to take her back to Eden—dead or alive.

My Thoughts:
Mercy and her brother Gideon were raised in a commune their mother was duped into joining when she had no where else to go. Their childhood was isolated and filled with lies about the outside world. Even worse they were abused and barely escaped with their lives.  Mercy’s tormentor, Ephraim Burton, her “husband” forced upon her at the age of twelve, thought she died in an escape attempt, but now Ephraim knows she’s alive and he’s hell bent on getting her back to the commune. Both to prove that one of the members lied about Mercy’s death and to punish her for the audacity to leave!

Fortunately, Mercy has Rafe Solokov, a Sacramento Homicide Detective, in her corner. Mercy can’t stop thinking about Rafe, but the investigation into Eden and the thought of dredging up the past sent her running back home to New Orleans (in the previous book). Rafe for his part thinks he scared Mercy off with a kiss, but his hopes for more are ignited again when he hears she’s returning to Sacramento.

I wanted to castrate Ephraim with a rusty butter knife! Yes, yes, I do realize he’s a fictional character, but seriously, this guy was evil! Most of the book is spent trying to stay one step ahead of this monster, evade his attempts to abduct or murder Mercy and her friends as he wreaks havoc on the city of Sacramento. Determined and ruthless, I have to say this guy scared me!

I was sad that Mercy and Gideon suffered at the hands of these charlatans, masking as tools of god, when they were nothing of the sort! More like tools of the devil preying on vulnerable people. It’s sad that there are actual cults like this in the world, which makes Say No More an even more chilling tale. I’m so happy Mercy wasn’t one of those TSTL heroines, reckless, and frustrating! Mercy wanted to nail Ephraim and the players at Eden, but she made sure she had help and protection while doing so.

Say No More was an action-packed thriller with a side of spicy romance. I was captivated and on the edge of my seat wondering what would happen next!  The whole Solokov family provided a great cast of secondary characters. Fierce, loyal, and there for support! I loved that both Mercy and Rafe had a solid base of friends and family to battle for them or cheer them on when they could do no more.

Mercy’s story began in the last book with her brother Gideon’s story, and while I don’t think you necessarily need to read the previous book, it does provide background for Mercy and Rafe’s story that you’d miss otherwise.

Posted by Rachel @Waves of Fiction at 9:00 PM