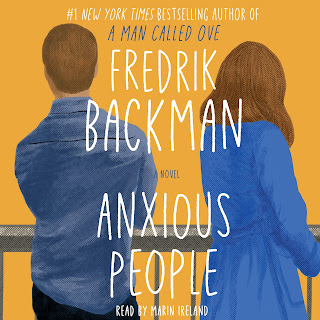 My Thoughts:
Can you believe Anxious People was my first experience with Fredrik Backman? I’ve heard so many good things about his writing and this story didn’t disappoint. It brought out all the feels.
I will say that at first, I was a bit confused about the story and where it was going. The police interviews and the cadence drove me a bit nuts, so I warn if you pick this up, hang on and have a bit of patience because it all comes together beautifully! It’s a story about an attempted bank robbery, an accidental hostage situation, but at the core it’s about love and how our actions impact others. The story is quirky, fun, and inspirational. I did shed a few tears by the end!

I listened to the audio and while Marin Ireland’s performance was good, I was a little disappointed that she didn’t have a Swedish accent. The story was set in Sweden after all. Other than that, I enjoyed the audio.
4 Suns

Goodreads Description:
This is a poignant comedy about a crime that never took place, a would-be bank robber who disappears into thin air, and eight extremely anxious strangers who find they have more in common than they ever imagined.

Viewing an apartment normally doesn’t turn into a life-or-death situation, but this particular open house becomes just that when a failed bank robber bursts in and takes everyone in the apartment hostage. As the pressure mounts, the eight strangers slowly begin opening up to one another and reveal long-hidden truths.

As police surround the premises and television channels broadcast the hostage situation live, the tension mounts and even deeper secrets are slowly revealed. Before long, the robber must decide which is the more terrifying prospect: going out to face the police, or staying in the apartment with this group of impossible people.
Posted by Rachel @Waves of Fiction at 8:22 PM