Review & Giveaway: The Lady Has a Past by Amanda Quick 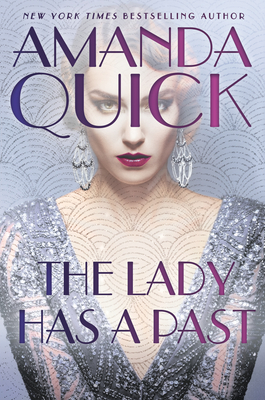 The Lady Has a Past (Burning Cove #5) by Amanda Quick
Publication Date: May 4th 2021 by Berkley Books
Pages: 352
Source: Publisher
Rating: ★★★★
Links: Amazon | Barnes & Noble | Kobo | Goodreads
My Thoughts:
After realizing her father will never let her run the family’s shipping business and a failed engagement, Lyra Brazier is trying her hand at private investigation in Burning Cove, California. It quickly becomes apparent that Lyra has a knack for investigating as she has an uncanny way of getting people to talk to her.
Lyra’s thrown into the thick of things when her boss, Raina Kirk, proclaims she must leave town to take care of some personal business. Raina disappears and Lyra knows she must find her. Luther Pell, Raina’s powerful and mysterious gentleman friend, insists on joining in the investigation and sending Simon Cage with Lyra to the fancy spa resort Raina has reportedly ran off to.
Simon has his own special abilities, even though officially he’s an antique book dealer, he secretly works with Luther in his clandestine investigation/solution business.  Lyra and Simon pose as newlyweds and check in, noting right away things are not as they seem and Raina’s nowhere to be found.
At first Lyra and Simon knock heads and don’t get along, but they must put aside their differences to get to the bottom of Raina’s disappearance. Gradually, Simon and Lyra form a begrudging respect for each other’s talents and can’t help the irresistible pull of attraction they feel.  Dodging danger, and the intense situation they find themselves thrown into mean they have to focus on finding Raina and trying to stay alive, but they do manage to steal away for a few steamy encounters!
There’s an undercurrent of danger and I was worried for both Lyra and Raina! I appreciated that the drama and conflict in the story didn’t come from the relationship woes, but instead the mystery Lyra and Simon are trying to solve. Luther and Raina’s (side characters that have shown up in previous books) relationship features prominently, too.
The Lady Has a Past is set in the town of Burning Cove in the 1930’s, where the rich and famous come to relax and be seen. I’ve enjoyed the beautiful coastal setting and peek into the glamourous past depicted here! Danger, thrills, mystery, and romance combine for an exciting story! It was easy to breeze right through while enjoying this by-gone era. While there are some returning characters, each story in the series can be read as a standalone.

Investigative apprentice Lyra Brazier, the newest resident of Burning Cove, is unsettled when her boss suddenly goes on a health retreat at an exclusive spa and disappears without another word. Lyra knows something has happened to Raina Kirk, and she is the only one who can track her down. The health spa is known for its luxurious offerings and prestigious clientele, and the wealthy, socialite background Lyra desperately wanted to leave behind is perfect for this undercover job. The agency brings in a partner and bodyguard for her, but she doesn't get the suave, pistol-packing private eye she expected.

Simon Cage is a mild-mannered antiquarian book dealer with a quiet, academic air, and Lyra can't figure out why he was chosen as her partner. But it soon becomes clear when they arrive at the spa and pose as a couple: Simon has a unique gift that allows him to detect secrets, a skill that is crucial in finding Raina.

The unlikely duo falls down a rabbit hole of twisted rumors and missing socialites, discovering that the health spa is a façade for something far darker than they imagined. With a murderer in their midst, Raina isn't the only one in grave danger—Lyra is next.

The lovely people of Berkley have provided a Hardcover Copy of The Lady Has a Past and I've decided to give it away to one lucky reader! The giveaway is open to US Residents only. Fill out the rafflecopter for a chance to win. Good luck!
a Rafflecopter giveaway
Posted by Rachel @Waves of Fiction at 12:00 AM