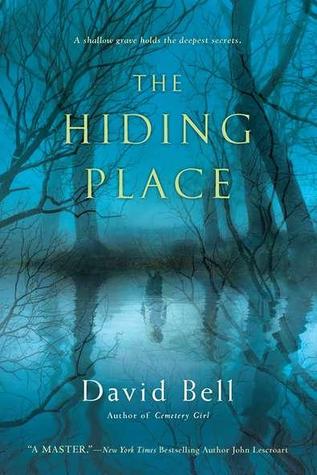 The Hiding Place by David Bell
Publication Date: October 2nd 2012 by Berkley Books
Pages: 380
Source: Publisher
Rating: ★★★★
Links: Amazon | Barnes & Noble | Kobo | Goodreads | Audible
My Thoughts:
The murder of four-year-old Justin has colored the lives of the Manning family, and now that the twenty-fifth anniversary has come a lot of old questions surface. Was the right man, Dante Rogers, convicted? Janet, Justin’s older sister has her doubts, as does the investigating Detective who was just a rookie when the murder happened. Compounding those doubts is the continued insistence by Dante that he is innocent.  Secrets and lies are unearthed in this engaging mystery!
Ashleigh, Janet’s fifteen-year-old daughter, has made it her mission to find out the truth, and there’s some new investigating by Detective Stynes, and Janet as well. Ashleigh was a great character, and I really enjoyed her part of the story. I also admired Janet, now a single mom, a good one, doing the right thing by her dad, as well. I was eager to get to the truth, which was revealed gradually, bits came to light through Stynes, Ashleigh, and Janet’s digging until all questions were answered with a satisfying conclusion. The Hiding Place was well-written with good pacing. It captured and held my attention from the first page!
I was just reminded I had downloaded The Hiding Place when I got a peek at a new version of Edelweiss and saw it on my list of unreviewed books. I downloaded this back in 2012, almost ten years ago! Oh, my goodness! I figured it was about time I got to it, and thankfully there was an audio version at my library. I must thank Berkley Books for the story and for their patience!
4 Stars

Twenty-five-years ago, the disappearance of four-year-old Justin Manning rocked the small town of Dove Point, Ohio. After his body was found in a shallow grave in the woods two months later, the repercussions were felt for years.

Janet Manning has been haunted by the murder since the day she lost sight of her brother in the park. Now, with the twenty-fifth anniversary of Justin’s death looming, a detective and a newspaper reporter have started to ask questions, opening old wounds and raising new suspicions. Could the man convicted of the murder — who spent more than two decades in prison — really be innocent? Janet’s childhood friend and high school crush, who was in the park with her that day, has returned to Dove Point, where he is wrestling with his own conflicted memories of the events. And a strange man appears at Janet’s door in the middle of the night, claiming to know the truth.

Soon, years of deceit will be swept away, and the truth about what happened to Janet’s brother will be revealed. And the answers that Janet has sought may be found much closer to home than she ever could have imagined.

Posted by Rachel @Waves of Fiction at 8:59 AM