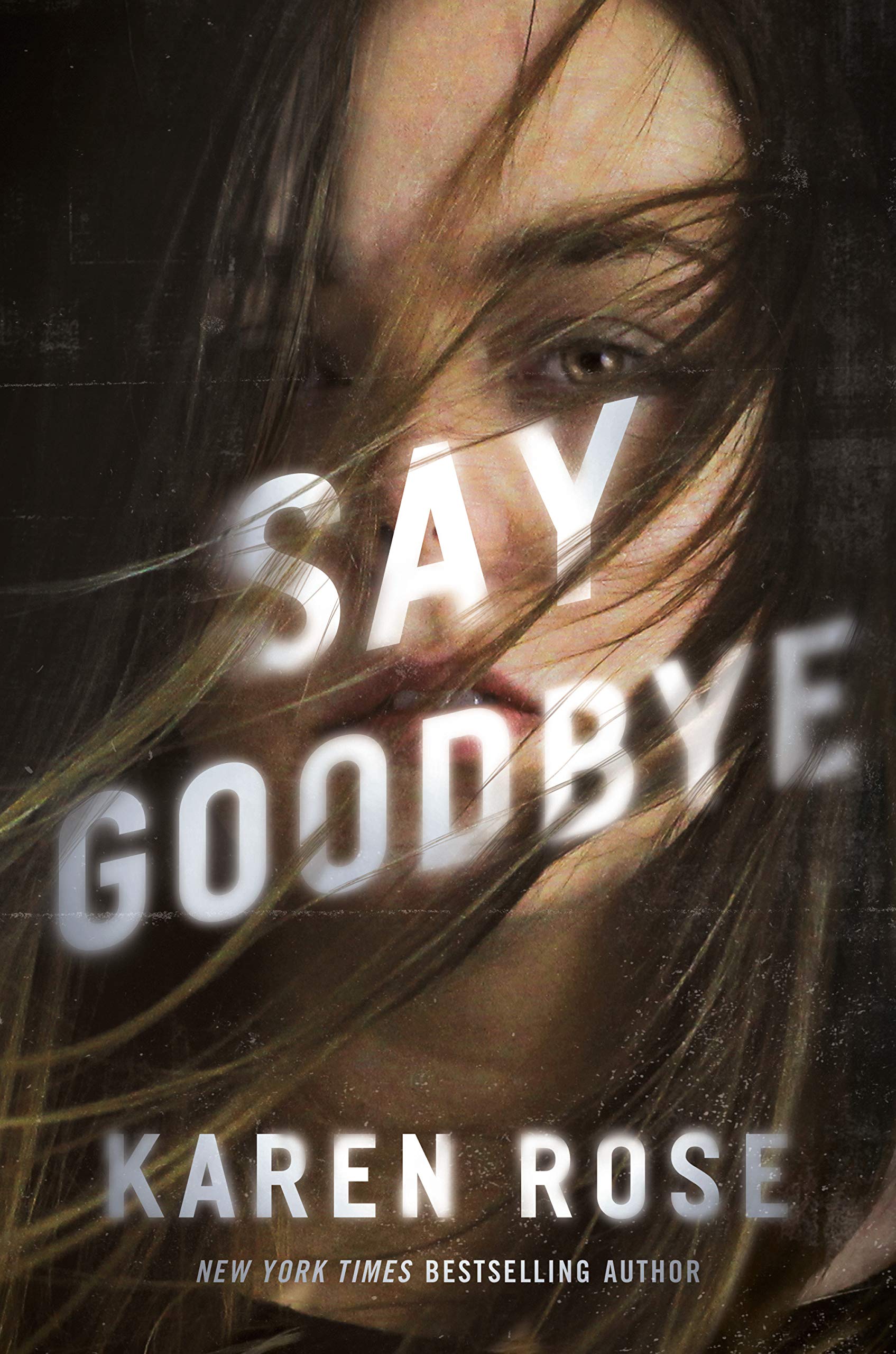 Say Goodbye (Romantic Suspense #25, Sacramento #3) by Karen Rose
Publication Date: August 3rd 2021 by Berkley
Pages: 630
Source: Publisher
Rating: ★★★★★
Links: Amazon | Barnes & Noble | Kobo | Goodreads
My Thoughts:
Liza’s been in love with FBI Agent, Tom Hunter, since she was seventeen, but they’ve always been in the friend zone. Life happened, Tom got engaged and then lost his fiancée, and Liza enlisted in the Army as a medic, served and came home to start nursing school, but they’ve always stayed close. Obviously, this has been painful for Liza thinking her feelings were never reciprocated. Little does she know that Tom initially felt the same for her, but she was too young at the time, and as I said life happened. Now, seven years later they’re living in the same duplex.  Their lives are very intertwined, living next to each other and by both being taken in by the Sokolov’s, a large, loving family in the middle of this Eden drama.
Eden is the cult Gideon and Mercy (last two books) escaped from, but not before suffering abuse at the hands of the leaders. They were somewhat safe before as the leaders thought both were dead, but the cat was let out of the bag and now no one is safe until Eden is brought down for good. I hated the men that ran Eden luring people into a supposedly simpler life to be closer to God, when they were nothing but charlatans and predators! Girls were forced to take a husband at twelve and viewed basically as property.  The young boys didn’t fare much better and were subjected to sexual and/or physical abuse as well. And they had no problem killing anyone that defied them either.
In the last book Liza became close to the Sokolov family when she went undercover to question a suspect’s mother. Now she’s in the thick of it again when the killer here takes aim at Mercy and Liza’s quick thinking foils his plans. Tom’s not happy about her involvement, but he knows that Liza is more than capable of protecting herself having had combat experience in the Army. The danger also clarifies his deeper feelings for Liza. Life and death situations have a way of doing that! I love the unrequited-love-troupe and it was done well here. Tom and Liza’s romance was hot and sweet, full of longing. In the middle of all this chaos it was lovely!
Even though Say Goodbye is a long book, there’s never a dull moment and the only reason I didn’t end up finishing in one day is because real life got in the way! I wanted to hunker down and read through! The characters face danger at every turn, with DJ scheming to take out Mercy, Daisy or Gideon and willing to take out anyone willing to get in the way. There’s a lot of side plots and investigations at play and I was invested in every part! I’ve appreciated that in all these stories that the author didn’t write a TSTL heroine! Yes, they’re in danger, but in each case, they take the help offered, and try to prepare for all situations. However, DJ is relentless and doesn’t care about killing anyone to get what he wants. I have to say that there was a moment or two I felt bad for DJ, knowing the abuse he suffered, abuse that was allowed to happen by both of his fathers, and then he’d take away any pity by his actions.
I loved the Sacramento three story arc! It was thrilling and there was danger at every turn, but it was also a well-developed romance with amazing side characters!  Say Goodbye seems to wrap up the Sacramento/Eden story arc, and while this is Tom and Liza’s story/romance I think it’s best to read Say You’re Sorry (book 22) and Say No More (book 24) before you read Say Goodbye (book 25). I read one book before in this long series, but it was only marginally connected and I don’t think you need to read any of the previous stories before Say You’re Sorry, the first in the Sacramento series to enjoy Say Goodbye. There was a book in between 22 and 24 (Into the Dark, book 23) that isn’t part of the Sacramento arc.
5 Stars

ayley Gibbs winced as her belly scraped against the doorjamb lead‑ ing into the clinic. Dammit. She’d underestimated her current—

and increasing—size yet again. Damn pregnancy.

She gave her stomach a soothing pat. Not you, she silently told her unborn child. Her daughter. I’m not mad at you, Jellybean. Never you. She was mad, however, at her mother. She was beyond furious with the woman. And scared of her at the same time. The fury was nothing new. The fear . . . well, that was new. At least this kind of fear. It had always been the fear of not having enough to eat, or of where they’d live the next week, or what her mother would do if she learned that Hayley was having sex with her high school boyfriend Cameron, or

that her little brother Graham was shoplifting electronics.

Then she’d found out what her mother would do if she found out. Move us here. To this hellhole in the middle of fucking nowhere. From which Hayley was going to escape or die trying.

She just needed to get into the clinic’s office.

Drawing a breath, she eased her way through the clinic door and

quietly closed it behind her. She stood statue‑still, listening for the sound of anyone else. But it was silent.

Thank you, she mouthed, not sure whom she was thanking. Prob‑ ably not God, or not her mother’s God, at least. The God Hayley wanted to thank would help her keep her baby safe. The God she wanted to thank definitely wouldn’t approve of these . . . monsters.

Eden was full of monsters and her mother had dragged Hayley and her brother here, kicking and screaming.

Hayley rubbed her fingertips over the thick chain welded around her neck.

Welded. Around. My. Neck.

It wasn’t jewelry, despite the locket that dangled from it. It was a collar. It was ownership.

It was also empty, at the moment. The locket. But after the baby came, her locket would be filled with her wedding photo. She was technically married now—and had been since the day they’d arrived in this awful place. Luckily her “husband” didn’t want to “consum‑ mate” their union with another man’s bastard in her belly, so she hadn’t been forced into sex. Yet.

He didn’t want their wedding photo sullied with the evidence of her sin. He’d have the photo taken after the “bastard” was born. Which gave her a little more than six weeks.

Hayley’s gut churned at the thought of being the fourth wife Brother Joshua would have—at the same time. Polygamy abounded in Eden, and Hayley wanted no part of it.

She hadn’t wanted any of it. She just wanted to be with her boy‑ friend and live their lives the way they’d always planned since their first homecoming dance in the ninth grade.

No, this baby wasn’t what she and Cameron had planned, at least not now. They were only seventeen, after all. But Cam’s parents had stepped up and said that they could live with them once the baby came, that they could still go to college.

But her mother hadn’t agreed. The next thing Hayley had known,

she and Graham had been forced into the back of some guy’s truck.

Here in Eden. Here in the clinic, closed at the moment. If she got caught . . . She shuddered at the very thought. But she had to try. She was more afraid to stay in Eden than she was of any punishment. And Pastor—the creepy leader of this creepy cult in the mountains—he terrified her. The people here obeyed him like robots.

She rubbed her stomach as it lurched again. Come on now. Don’t worry, Jellybean. I’ll get us out of here before you arrive. I promise.

So now she had to. She’d just promised her daughter.

Her daughter. She was going to have a daughter. She and Cameron had seen the baby on the ultrasound back at the ob‑gyn’s office in San Francisco, had heard her heartbeat. Cam had cried, his hand clutching hers as they’d stared at the small screen.

I love you, Cam, she whispered inside her own mind. I love you both. They hadn’t chosen a name yet, so they called her Jellybean for now. Her daughter didn’t even have a name, but Hayley would have given up everything to protect her. Which meant getting them out of this place, with its clinic that would have been considered medieval

even in Little House on the Prairie days.

She looked around the dark room, shrouded in shadow. There was no ultrasound here. No oxygen if the baby needed it. No painkillers. At all. Just a bed with stirrups and straps.

Hayley didn’t want to know what the straps were used for.

She did know that women died in childbirth here. She’d heard the whispers.

It would be God’s punishment for her sin, one woman had said.

She’s a whore, another had added.

And then one old crone had whispered words that had chilled her to the bone: Sister Rebecca will take the baby and raise it as her own.

Even if she lives? the first woman had asked.

Even if the whore lives, the crone had confirmed. God wouldn’t want any baby to be raised by that Jezebel.

Hayley cradled her stomach with both arms. No fucking way in hell. Even if Sister Rebecca had been a good person, which she was not. She was Brother Joshua’s “first” wife—the highest‑ranking of all the sister‑wives. Brother Joshua had a total of four wives and Hayley was at the bottom of the list, which meant she had to obey the other wives as well as her “husband.”

Hayley wanted to spit the word out of her mouth. He is not my husband.

It was like living in a costume drama from the 1800s.

Sister Rebecca had three children, all taken from other women in the compound. Two of the women had apparently died in childbirth. The third had been birthed by an unwed mother. Like me. No one had mentioned what had happened to the unwed mother and Hayley won‑ dered who she was.

Nobody’s taking my daughter from me. Nobody. They’ll have to kill me first.

Eden faces a final reckoning when the cult's past victims hunt them down in this explosive, high-stakes thriller in the Sacramento series from New York Times bestselling author Karen Rose.

For decades, Eden has remained hidden in the remote wilds of the Pacific Northwest, “Pastor” keeping his cult's followers in thrall for his personal profit and sexual pleasures. But the Founding Elders are splintering, and Pastor's surrogate son DJ is scheming to make it all his own.

When two of Eden's newest members send out a cry for help, it reaches FBI Special Agent Tom Hunter, whose friend and fellow FBI Special Agent Gideon Reynolds and his sister, Mercy, are themselves escapees of the Eden cult, targeted by the Founding Elders who want them silenced forever. The three have vowed to find the cult and bring it down, and now, they finally have a solid lead.

Neutralizing Eden’s threat will save captive members and ensure Tom’s new friends can live without fear. But when his best friend, ex-Army combat medic Liza Barkley, joins the case, it puts her life—and their blossoming love—in danger. With everything they hold dear in the balance, Tom and Liza, together with Gideon and Mercy, must end Eden once and for all.