Audio Review: A Flicker in the Dark by Stacy Willingham 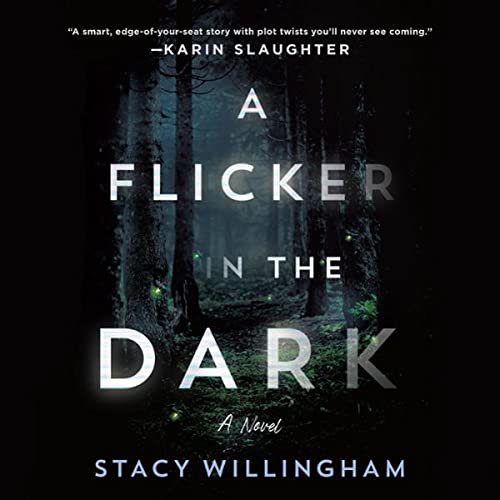 A Flicker in the Dark by Stacy Willingham
Publication Date: January 11th 2022 by Macmillan Audio
Pages: 368
Audio Book Length: 11 hrs 1 min
Narrator: Karissa Vacker
Source: Publisher
Rating: ★★★★
Links: Amazon | Barnes & Noble | Kobo | Libro.fm | Audible | Goodreads
My Thoughts:
At twelve, Chloe Davis’ world came crashing down when she found out her father, who had always been loving, kind and gentle, was a serial killer. Now twenty years later, Chloe’s built a life she can be proud of as a psychologist, she helps people cope and deal with trauma, and she’s preparing to marry a wonderful man. That is until girls start disappearing again, and the circumstances are eerily similar to her father’s case.
As we get into the story it sounds like Chloe has come out of a tragedy and is thriving, but it becomes apparent that she’s still kind of a mess. Relying on prescription meds (just a little) and alcohol to taper off her daily anxiety, she’s a bit of an unreliable narrator at times.  I will confess, I usually find an unreliable narrator annoying, but Chloe wasn’t completely checked out for the most part, and she was easy to like.
I really enjoyed this twisty mystery! There were a few suspicious characters, clues surface casting each in a shadow of doubt, until all is revealed at the end. It wasn’t hard to guess at the murderer, but I wasn’t sure and it’s fun to feel like your suspicions are confirmed. If I have any complaint, it would be that the writing was a little overly descriptive at times and some of the flashback storytelling was a little too circuitous when I just wanted to get to the point. Still, I thought A Flicker in the Dark was a thrilling debut!  A story I wanted to read straight through with no interruptions so I could find out what really happened in past and see how it all worked out for Chloe in the end.
A Flicker in the Dark was my Book of the Month choice for December, so I was thrilled to see an audio copy come up for review. Karissa Vicker was an excellent performer! She brought the story to life and infused it with an urgency that kept me on the edge of my seat! I listened at 1.5x-1.75x.
4 Stars

From debut author Stacy Willingham comes a masterfully done, lyrical thriller, certain to be the launch of an amazing career. A Flicker in the Dark is eerily compelling to the very last page.

When Chloe Davis was twelve, six teenage girls went missing in her small Louisiana town. By the end of the summer, Chloe’s father had been arrested as a serial killer and promptly put in prison. Chloe and the rest of her family were left to grapple with the truth and try to move forward while dealing with the aftermath.

Now 20 years later, Chloe is a psychologist in private practice in Baton Rouge and getting ready for her wedding. She finally has a fragile grasp on the happiness she’s worked so hard to get. Sometimes, though, she feels as out of control of her own life as the troubled teens who are her patients. And then a local teenage girl goes missing, and then another, and that terrifying summer comes crashing back. Is she paranoid, and seeing parallels that aren't really there, or for the second time in her life, is she about to unmask a killer?

In a debut novel that has already been optioned for a limited series by actress Emma Stone and sold to a dozen countries around the world, Stacy Willingham has created an unforgettable character in a spellbinding thriller that will appeal equally to fans of Gillian Flynn and Karin Slaughter.

Posted by Rachel @Waves of Fiction at 9:01 PM