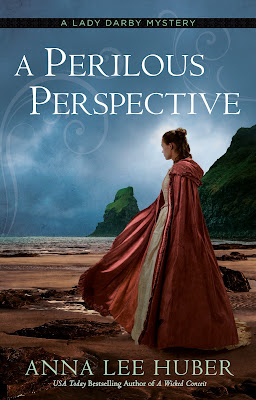 A Perilous Perspective (Lady Darby #10) by Anna Lee Huber
Publication Date: April 19th 2022 by Berkley
Pages: 384
Source: Publisher
Rating: ★★★★
Links: Amazon | Barnes & Noble | Audible | Kobo | Goodreads
My Thoughts:
Lady Darby is one of my favorite historical mystery series. I binged through the first eight books in 2020.  When we first meet Lady Kiera Darby at the beginning of the series, she is an infamous woman, shunned by society when they found out her late husband had her sketch the dead bodies he dissected for an anatomy journal he planned on publishing. At the time fresh bodies were hard to come by, not many would donate their body to science for this purpose, so medical colleges and people like Sir Darby resorted to buying corpses from questionable sources. It was later found out that some of these suppliers not only robbed fresh graves, but also murdered people to sell as dead medical subjects. Kiera had no knowledge of this, and even if she did there wasn’t much she could’ve done about it since her husband threatened her to comply or else. He was an awful man, as we learn from Kiera’s memories, and so I was thrilled he died before we’re introduced to her.
This unwanted, unsolicited knowledge of anatomy as well as Kiera’s superb deductive skills have made her an excellent partner to Gage as in inquiry agent tasked to solve murders or other crimes.
We’re now on book ten in the series, so there are bound to be spoilers if you read on.
Kiera and Gage, along with their three-month old daughter, Emma, are in Argyll, Scotland to attend Lady Charlotte’s wedding to Kiera’s cousin, Rye. Kiera’s overjoyed at the match and it’s evident that both her and Gage are besotted with their daughter. Things start off well until Kiera notices that a couple of the paintings in the Marquess of Barbreck’s great hall are forgeries. Barbreck doesn’t take kindly to the revelation, sparking an uproar, unearthing old dramas and finally leading to murder.
Half of the appeal of this series is the relationship between Kiera and Gage! It wasn’t all smooth sailing at the beginning, but it’s a pleasure to see them so in love now with each other and reveling in the love they share for their daughter. Emma sounded so adorable! Ms. Huber vividly captured that intense love you feel for your child, especially when they’re a baby.
There was an interesting revelation about Kiera’s mother that shocked and unsettled her. Bree and Anderly continue to dance around their feelings for each other, even though it’s obvious they still care.
The mystery was methodically investigated, a historical crime procedural, if you will.  It wrapped up nicely but set things up to jump right into the next one and I can’t wait!
4 Stars

Argyll, Scotland. July 1832. After a trying few months in Edinburgh, Kiera and her husband and investigative partner, Sebastian Gage, are eager to escape to the Highlands with their three-month-old child. Kiera is overjoyed for her cousin Rye and her detractor-turned-friend Charlotte who are being wed in a private ceremony at the estate of Rye’s great-uncle, the Marquess of Barbreck, in what seems to be the perfect wedding party.

But when Kiera is invited to peruse Barbreck’s extensive art collection, she is disturbed to discover that one of his most priceless paintings seems to be a forgery. The marquess’s furious reaction when she dares to mention it leaves her shaken and the entire house shocked. For it turns out that this is not the first time the word forgery has been uttered in connection with the Barbreck household.

Matters turn more ominous when a maid from a neighboring estate is found murdered where the forged painting hangs. Is her death connected to the forgeries, perhaps a grisly warning of what awaits those who dare to probe deeper? With unknown entities aligned against them, Kiera and Gage are forced to confront the fact that they may have underestimated their opponent. For they are swiftly made to realize that Charlotte’s and Rye’s future happiness is not the only issue at stake, and this stealthy game of cat and mouse could prove to have deadly consequences.