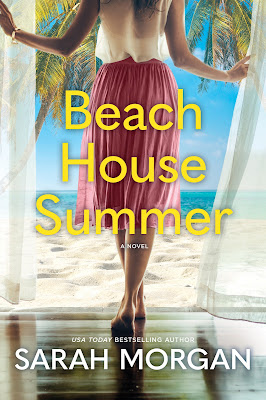 Beach House Summer by Sarah Morgan
Publication Date: May 17th 2022 by HQN Books
Pages: 387
Source: Publisher
Rating: ★★★★
Links: Amazon | BooksAMillion | Powell's
Barnes & Noble | BookShop.org | Goodreads
My Thoughts:
Joanna divorced her famous chef husband, Cliff Whitman, over a year ago, but that hasn’t spared her from the spotlight. When he dies in a car accident and the press finds out a pregnant woman was in the car with him, the media makes her life so unbearable Joanna decides to head back to her hometown. A place she hasn’t visited since she left twenty years earlier.  She left her two best friends and seeing them won’t be easy. There’s a story behind that and why she took off in the first place.
Ashley is the girl that was in the car with Joanna’s husband and so she’s stunned when Joanna offers to give her a place to stay and hideout from the media. Ashley has her own history. She and Joanna get close while sorting through their problems.
Melanie married her high school sweetheart and never left Silver Point. Raising their daughter, Eden, in the small, beach town wasn’t how she thought she’d spend her life, but it’s been rewarding, that is until Mel and Eden started butting heads over everything.  She and Joanna used to be best friends until Joanna took off with Cliff and never looked back, but is that how it happened?  Questions come up when Joanna shows up in town again.
Beach House Summer had a few surprises. Not all is as it seemed just reading the blurb and I was happy both Joanna and Ashley each had their own romance, Joanna’s was more central, but both took a back to their problems. Joanna, Mel, and Ashley came to a point in their lives where they had to examine the past and figure out what they wanted and aim for happiness in the future. I enjoyed their journey so much! There were lots of layers and several little side stories and I was invested in all of them!
4 Stars

USA Today bestselling author Sarah Morgan returns with the ultimate beach read, as one woman forges the most unlikely friendship of all, and embarks on a summer of confronting her past in order to build the future she wants...

When Joanna Whitman's ex-husband, one of California's most beloved celebrity chefs, dies in a car accident, she doesn't know what to feel. Their dysfunctional marriage held more secrets than she cares to remember, but when she discovers a young woman was with him in the crash--who's now in hospital, on her own, and pregnant --Joanna sees red. How dare he ruin yet another woman's life? More than anyone, Joanna knows the brutal spotlight this girl is going to find herself in...unless she can find a way for them both to disappear?

Ashley can't believe it when Joanna shows up in her hospital room and offers to spirit them both away for the summer to her secluded beach house on the Californian coast. Joanna should be hating her, not helping her. But orphaned and pregnant, Ashley can't turn Joanna down. Even though she knows that if Joanna ever discovers the real truth of why Ashley was in her ex's car, their tentative bond would never hold.

Together, they escape to the beach house, nestled high above the sleepy Californian town where Joanna grew up, and left without a backward glance. Joanna's only goal for the summer is privacy, but her return creates waves in the community, not least for the best friend she left behind. Both Joanna and Ashley are hiding secrets, but as they fall under the spell of their summer home - and draw on each other's courage - these unlikely friends realise that to seize the futures they want, they must step out of the shadows and into the sunshine.

1) I love the title and synopsis. Where did the inspiration for the book come from?

I’m fascinated by the idea of celebrity, and how it must feel to live in the spotlight. I was pondering on how much I’d hate that when I came up with the character of Joanna, who is an ‘accidental’ celebrity by virtue of her marriage to a high profile celebrity chef who both relishes and relies on media attention. Joanna didn’t just marry him, she married the lifestyle he’d chosen and she was never comfortable with it. As I was writing, I reflected a lot on how someone lives a private life, and how they keep secrets, if their every move is conducted under a spotlight. Those were some of the issues I wanted to explore. It was a fun book to write!

2) What was the best part about writing this book and why?

So many things. I enjoyed exploring the dynamics between the characters who are all quite different, and also being able to give Joanna a second chance at love (I’m a big believer in second chances!). But I confess that one of the best parts of writing this book was the setting. It takes me around six months to write a book, and during that time I’m immersed in the place as well as the people. Beach House Summer is set on the coast of California, which gave me the excuse to research beautiful beach houses. I was transported, and I hope the reader will feel that way too.

3) What was the most difficult part about writing this book and why?

Giving my characters a hard time - in particular subjecting poor Joanna to all the media attention, which she hated and found distressing. I felt so cruel! But writers sometimes have to be cruel to their characters, it’s part of the job, and a story where the characters are all happy in their lives and have no challenges to face would end on page one. But even knowing that, it’s always difficult when you’ve grown to love the people you’ve created. I remind myself that no matter how many obstacles I throw their way, I always, always give them a happy ending. That makes the whole thing easier.

4) Who is your favourite character and why?

That’s a tough question. I love all the characters, but in particular I enjoyed exploring the way that Joanna and Ashley interact, and how they gradually support each other and change over time. I find multigenerational friendships to be intriguing and interesting to write. With Joanna and Ashley, their age difference doesn’t stop them learning from each other and that part was such fun to write.

5) I have your books Sleigh Bells in the Snow, A Wedding in December and a Christmas Escape. Do you prefer writing books set in summer or winter and why? Which is easier or more challenging and why?

I love writing books set in winter and have done so almost every year since I’ve been published, but I wouldn’t want to only write Christmas books. It takes me around six months to write a novel, and by the time I’ve finished I’m ready to move on to a new set of characters, a new set of problems, and a new season! Each comes with its own set of challenges, but I enjoy writing both. In the end, whatever the season and whatever the setting, I aim to deliver and emotional story that will keep readers turning the pages.

The most important element is always the story itself. When you’re writing commercial fiction, you want to make your reader feel something. It’s important to create unique characters, with their own strengths and flaws, and to give them a problem or a dilemma that will keep the reader turning the pages. Sometimes you can turn the seasonal element to your advantage, and whenever possible I make sure that the season and the setting is integral to the plot. With a Christmas book, I try and give the reader all the magic of a cosy, snowy winter without any of the reality (freezing fingers and toes, scraping ice from the car etc). With my next book, Snowed in For Christmas, the season plays a big part in bringing the characters together, not just the weather but also the seasonal tradition of family gatherings. With summer books I want readers to feel as if they’ve had their own summer escape. If it’s a beach book (like Beach House Summer!) then I want them to feel the sand under their toes and the sun on their face.

7) Can you give some advice for those writing in the same genre as you?

Write the story that you’re passionate about. If you’re excited to write it, then there’s a good chance someone will be excited to read it. Create characters you really care about and give them a conflict that will keep a reader turning the pages. If you are rooting for that character, then the chances are the reader will be too.

8) Do you have plans for any other novels? When will they be released?

My next Christmas novel is called Snowed in For Christmas, and it will be out in September in the US and Canada. I had so much fun with this book and it includes all the elements I love including in my writing - family dynamics, friendship and romance. I laughed aloud when I wrote it, and I hope it will make readers smile when they read it.

About the author:
Sarah Morgan is a USA Today and Sunday Times bestselling author of contemporary romance and women's fiction. She has sold more than 21 million copies of her books and her trademark humour and warmth have gained her fans across the globe. Sarah lives with her family near London, England, where the rain frequently keeps her trapped in her office. Visit her at www.sarahmorgan.com
Connect with Sarah Morgan:
Website | Twitter | Facebook | Instagram | Goodreads

Posted by Rachel @Waves of Fiction at 9:47 AM