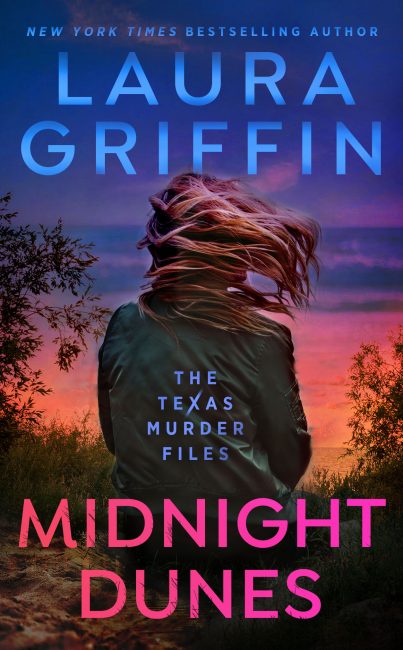 Midnight Dunes (The Texas Murder Files #3) by Laura Griffin
Publication Date: May 24th 2022 by Berkley
Pages: 368
Source: Publisher
Rating: ★★★★½
Links: Amazon | Barnes & Noble | Kobo | Goodreads
My Thoughts:
Macey Burns is in Lost Beach, Texas for a fresh start after her TV reporting career derailed. She’s hired by its tourism board to film commercials to attract visitors to their beautiful island. Unfortunately, things get off to an unsettling start when a woman is murdered, and Macey finds out she’s renting the woman’s former beach cottage. Detective Owen Breda is lead in the investigation and somehow, they keep bumping into each other, their paths cross over and over.
Owen is drawn in by Macey from the start, but the murder makes pursuing her difficult, especially when they need to keep a tight lid on the investigation. However, they’re thrown together through the investigation and Owen grows more attached with every encounter, their chemistry is palpable, but he’d like to keep Macey out of harm’s way.
Even though Macey’s out of the investigative reporting gig, it seems like she’s in the middle of this murder case left and right, and she can’t shake the eerie feelings she has staying at the dead woman’s cottage.  Macey’s vowed to make her film production company her priority, making a success out of the business she’s sunk her savings into, and having a romantic relationship is a distraction she doesn’t want to have, and yet… Every time Macey thinks to rebuff Owen she doesn’t. She’s so attracted to him despite her intentions.
Midnight Dunes was the perfect combination of police procedural investigation and steamy romance! One didn’t overtake the other and I enjoyed the balance. I was hooked from the first chapter as I tried to figure out the identity of the killer right along with Owen and Macey! The suspense and danger picked up in the latter half of the story and I was on the edge of my seat worried about these characters as the killer became more and more bold. I loved how it all turned out and wonder if we’ll be getting more mysteries from Lost Beach. Nicole certainly deserves her own story with Emmett, maybe? I look forward to whatever Ms. Griffin has to offer next!
4.5 Stars

Macey blinked at the windshield, shocked. Her heart raced as she tried to catch her breath. The car was tilted, and the headlights illuminated a patch of weeds and a gravelly strip of shoulder.

Macey put the gearshift in park and shoved open the door. She started to get out, but the seat belt yanked her back. Unbuckling it, she slid out. Rain pelted her as she looked around in a daze.

What the hell had happened? One second she'd been driving along and the next second it was like aliens had seized control of the car. And she'd definitely felt a bump. Had she hit something?

Glancing at the road, she saw no other traffic. She retrieved her cell phone and slammed the door. Her wet flip-flops thwacked against the gravel as she walked around the front of the Honda and checked for damage. No dents. No sign of an animal.

She stopped beside the front bumper. The right tire was flat.

She switched on her cell phone's flashlight and aimed it at the tire. Rain streamed down her face and neck. What now? She turned off the flashlight and called Josh, but he didn't pick up, so she sent him a text:

A car raced past and sprayed her with water. She yelped and whirled around, but the driver didn't even slow. Cursing, she glanced up and down the highway. This end of the island was fairly desolate-mostly campgrounds and nature parks. She'd passed a marina, but that was a ways back.

When she'd planned her trip down here, she had wanted seclusion. After weeks of scouring listings, she'd been ecstatic when a long-term rental popped up on the island's north end, just footsteps from the beach. The idea of being away from town, surrounded by sand and waves and the soundtrack of nature, had been immensely appealing. But now she wasn't sure. Maybe she should have followed Josh's advice and rented an apartment in town for the summer.

Macey shivered and rubbed her bare arms, chilled from the rain despite the warm temperature. Her tank top and jeans were already soaked through, and she was out here alone and stranded.

I can handle it.

She went back around the Honda and reached inside once again, this time to pop the trunk. It was a new-to-her car, and she didn't know the spare tire situation, but surely there was something in back. Macey had helped a boyfriend change a tire in college once. Well, maybe not helped, but she'd watched, and it had seemed pretty straightforward.

She tromped back to the trunk and slid aside the tripod and the suitcase filled with camera equipment. After finding the corner tab, she peeled back the layer of carpet.

Score! A spare tire, along with a heavy metal tool-a lug wrench?-and what had to be a jack.

But the spare seemed . . . off. She frowned down at the anemic-looking tire. Pressing her fingers against it, she confirmed her suspicion.

The spare was flat, too.

Macey checked her phone. Still nothing from Josh. She hated asking a man to rescue her, but it was freaking pouring, and she was out of options.

Another lightning strobe, followed by a clap of thunder. Then a jagged white bolt zapped down from above.

She looked up at the sky, awestruck. The ferocious beauty of it reminded her of why she'd been attracted to Lost Beach in the first place. She'd been lured by the film project, of course, which would pay her bills while she got her life sorted. But beyond that, she'd been attracted by the dramatic juxtaposition of nature and people. She'd been lured by the rugged Texas coast and one of the last long stretches of untamed beach and twenty-foot dunes.

Rainwater trickled down the front of her shirt, reminding her of her plight. She stared down at the useless tire.

Her trip was off to a rocky start. She wasn't superstitious-at least not usually-and she refused to take tonight as a bad omen. She was here for the entire summer, and no matter what happened she planned to make the best of it.

A flash of light had her turning around. A pair of headlights approached, high and wide apart, like a pickup truck. The truck slowed, and she felt a ripple of unease.

But maybe this was just what she needed-some Good Samaritan here to help her.

The truck rolled to a stop and the driver's-side door opened.

Macey squinted into the glare. Nerves fluttered in her stomach as a man got out. Tall, wide shoulders, baseball cap. She couldn't see his face, only his towering silhouette against the light as he walked toward her.

As he got closer, she saw that he was very tall-six-three, at least, and he easily outweighed her by a hundred pounds. Oftentimes Macey liked being short because people underestimated her. This was not one of those times.

When the shocking discovery of a murdered woman's body disturbs the tranquility of tourist season, the police detective in charge of the puzzling case must work alongside the new filmmaker in town to pursue every lead in the new romantic thriller from New York Times bestselling author Laura Griffin.

After a scandal derails her television reporting career, Macey Burns comes looking for a change of pace in Lost Beach, Texas. She's ready to focus on her first passion--documentary filmmaking--and has a new job working for the island's tourism board, shooting footage of the idyllic beachside community. Her plans for a relaxing rebound are dashed when she realizes the cottage she's renting belonged to the woman whose body was just found in the sand dunes.

Detective Owen Breda is under intense pressure to solve this murder. Violent crimes are rising in his small town, and he can't stand to see anyone else hurt...especially not the beautiful documentarian who keeps showing up at the precinct.

With the clock ticking, cameras rolling, and body count climbing, Macey and Owen must use all their resources to find the killer without getting caught in the crosshairs.

Laura Griffin is the New York Times and USA Today bestselling author of more than twenty-five books and novellas. She is a two-time RITA Award winner as well as the recipient of the Daphne du Maurier Award.

Posted by Rachel @Waves of Fiction at 8:50 AM