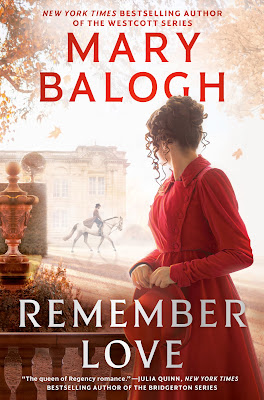 Remember Love (Ravenswood #1)  by Mary Balogh
Publication Date: July 12th 2022 by Berkley
Pages: 400
Source: Publisher & Purchased Audiobook
Rating: ★★★★★
Links: Amazon | Barnes & Noble | Kobo | Audible | Goodreads
My Thoughts:
Gwyneth Rhys and Devlin Ware, the future Earl of Stratton, have been in love with each other from afar for years, until one perfect day when they discover their mutual feelings.  That same day the situation unravels when Devlin finds out his father’s fidelity is a farce. Devlin calls him out on it in a very public way and is cast out ruining their plans, at least for now.
Devlin goes off to fight in the Napoleonic War while Gwyneth stays home and attempts to move on with her heart. Six years later, Devlin returns to take up his duties of Earl since his father has died, but he’s a changed man who feels incapable of being in love after everything he’s gone through. However, seeing Gwyneth and his beloved family reawakens feelings he never thought he’d have again, feelings that he’s intent on denying.
Remember Love, the first book in the Ravenswood series, was oh-so-lovely! I’m a huge sucker for a second chance romance. I just loved every minute of the story, from Devlin and Gwyneth’s initial time together, longing from afar and that magical time spent together, to years later discovering that attraction and pull had never died, even though Devlin was in a bit of denial and had to work through his feelings. But I also adored the rest of the families. Gwyneth’s parents and brother were so loving and supportive, and Devlin’s siblings were as well, even though I can see Philippa, Stephanie and Ben bear the scars from finding out that their father wasn’t the man they thought. That very public revelation had repercussions they each had to endure, and I think we’ll be finding out just how it affected each of the siblings in the books to come. I hope we get a story for each of the Ware’s and for Ben, the oldest son, of the clan from a dalliance before the senior Earl was married.
Mary Balogh’s writing is beautiful, she brought each of the characters to life, and I felt their hopes, dreams, disappointments, heartbreak, and joy deeply!  I eagerly await the next story!
5 Stars

Excerpt:
But Gwyneth scarcely noticed. For Devlin, elegantly dressed in a dark blue tailed evening coat with
gray knee breeches and white waistcoat, stockings, shirt, and neckcloth, was standing before her and
extending a hand for hers.
“Gwyneth?” he said. “My dance, I believe?”
He was not smiling. Not openly, at least. But there was a glow in his eyes and behind his face that
suggested he was smiling inside. Not just a social smile, but something for her alone. Or so she fancied.
Ah, she had so looked forward to this moment, and now it was here. She set her hand on his, palm to
palm, and he closed his fingers about it and led her to the head of a new set, the original one having
already stretched the full length of the ballroom. She stood next to Susan Ware, Devlin’s cousin, in the
line of ladies while he took his place opposite her next to Dr. Isherwood in the line of men. He continued
to look at her across the space between them with that same expression. Almost, she thought, as if he
wanted to devour her. It was a look that sent shivers of pleasure through her body. She smiled back with
all the sparkle that was inside her, and his eyes crinkled at the corners.
Soon there were four long parallel lines of dancers, two of women, two of men. A few adults,
mostly elderly people, and a crowd of children stood or sat off to the sides, watching. Gwyneth
remembered those days of childhood and the longing to be grown up and able to participate.
The orchestra struck a chord and the dancing began.
The pounding of several dozen feet on the wooden floor set a rhythm with the music of violins and
cello and flute and pianoforte while partners joined hands and promenaded to their left and then to
their right, both pairs of lines moving in unison with one another. They formed arches of hands with
their immediate neighbors like mini maypoles as they paced in a full circle, changed hands, and paced
back again. At the end of each pattern of steps the couple at the head of the line joined hands crosswise,
and twirled down between the lines to take their places at the foot before the whole thing began again.
Devlin smiled fully at Gwyneth as they twirled, the first couple in their line to do so, and she
laughed while everyone else in the lines clapped in time to the music. The earl was laughing in his own
set as he twirled the countess. And ah, she had never, ever been happier, Gwyneth thought. Not even
this afternoon in the rose arbor. As happy, maybe, but not more so. How absolutely . . . exhilarating it
was to be eighteen years old and in love and full of hope that perhaps she was loved in return.
But inevitably the music came to an end, and there was only a leftover ball to enjoy for the rest of
the evening. She tried not to feel sad about it. How ungrateful that would be.
“Thank you, Gwyneth,” Devlin said as he offered his arm and led her in the direction of her parents,
who had danced the set together. “Have you promised every other dance?”
“Only the next and the one after it,” she told him.
“Are you willing to keep the set after supper for me?” he asked.
She looked at him in surprise. The Wares never danced more than one set with the same partner,
either at this annual ball or at the Christmas ball or at any of the assemblies. It was a point of strict
etiquette with them.
“Yes,” she said.
“It will be dark by then and the air ought to be cooler,” he said. “Perhaps we can step outside.”
Step outside? To dance on the terrace? To take a stroll beyond it? He did not elaborate.
“I would enjoy that,” she said. She had not noticed until this moment how breathless the dancing
had made her.
“As would I,” he said.
Excerpted from Remember Love by Mary Balogh Copyright © 2022 by Mary Balogh. Excerpted by permission of Berkley.  All rights reserved. No part of this excerpt may be reproduced or reprinted without permission in writing from the publisher.
Book Description:

The undisputed queen of Regency romance is back with a brand-new story perfect for fans of Bridgerton.

The handsome and charismatic Earl of Stratton, Caleb Ware, has been exposed to the ton for his clandestine affairs—by his own son.

As a child, Devlin Ware thought his family stood for all that was right and good in the world. They were kind, gracious, and shared the beauty of Ravenwood, their grand country estate, by hosting lavish parties for the entire countryside. But at twenty-two, he discovered his whole world was an elaborate illusion, and when Devlin publicly called his family to account for it, he was exiled as a traitor.

So be it. He enlisted in the fight against Napoleon and didn’t look back for six years. But now his father is dead, the Ware family is broken, and as the heir he is being called home. It’s only when Gwyneth Rhys—the woman he loved and then lost after his family banished him—holds out her hand to help him that he is able make the difficult journey and try to piece together his fractured family.

It is Gwyneth’s loyalty, patience, and love that he needs. But is Devlin’s war-hardened heart even capable of offering her love in return? 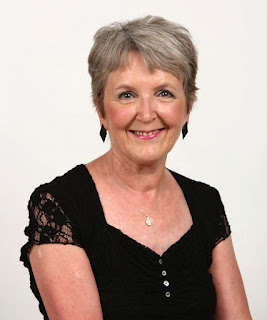 Photo Credit: Sharon Pelletier
About the author:
Mary Balogh has written more than one hundred historical novels and novellas, more than forty of which have been New York Times bestsellers. They include the Bedwyn saga, the Simply quartet, the Huxtable quintet, the seven-part Survivors’ Club series, and the Westcott series. Learn more online at marybalogh.com.
Posted by Rachel @Waves of Fiction at 12:33 PM