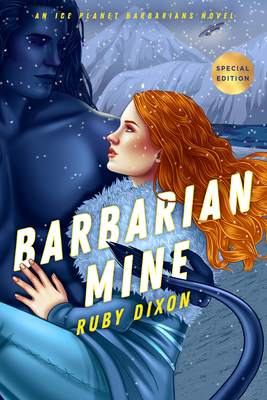 Barbarian Mine (Ice Planet Barbarians #4) by Ruby Dixon
Publication Date: September 13th 2022 by Berkley Books
Pages: 336
Source: Publisher
Rating: ★★★★
Links: Amazon | Barnes & Noble | Goodreads
My Thoughts:
Harlow was abducted by horrible green alien men who kidnapped a bunch of Earth women to sell/trade, who knows what, to other planets. They are truly awful, but thankfully, they crash on an icy planet they’ve dubbed “Not-Hoth”, like in Star Wars, because of its similarity to the fictional planet. Here they discover an alien race called the sa-khui dying out because of the lack of females. See where this is going? Fortunately, somehow the human females on the crashed ship are able to “resonate” and mate with the male sa-khui and there have already been a few mated pairs in the last books. Harlow hasn’t mated yet, but she’s happy to be on Not-Hoth all the same because on Earth she had terminal brain cancer that has been eradicated by the khui placed in her to make living on the planet possible. However, while out on a exhibition she is kidnapped by another sa-khui male, a sort of Tarzan Barbarian because he’s grown up away from the main tribe and has limited speaking or social skills. Of course, they “resonate” to each other meaning they’re mates.
I read the first two books a few years ago and loved the stories, but the Special Edition prompted me to dive back in and read Harlow and Rukh’s story. I really enjoyed getting back into this world! Rukh is so uncivilized, but sweet and entirely devoted to Harlow! He had his own sad story. I was captivated as they learned to communicate and Harlow educated him on more civilized living, and in ways of romance. Very spicy romance! They grow close, but life out alone comes with dangers they have to face and they may not be able to overcome all of them on their own.
As with the previous books, Barbarian Mine is some hot stuff, and was a quick, fun read, but there is bonus material in the Special Edition. The extra story “Fathers”, Harlow and Rukh’s Honeymoon that was previously a separate additional short story and a guide with characters and explanation of the backstory. I loved all the extra material, both the epilogue and short story touched my heart! The guide is really helpful. Still, I’d start from the beginning with this series.
4 Stars

I need two poles for a travois. Two. No problem. There's got to be trees in the distance, and I'm strong and whole.

Aehako's instructions ring through my mind, over and over. We need to make a travois and take Haeden back to the healer. My heart races wildly in my chest as I sprint through the snow, looking for the thin, pink, wispy trees of this planet. Kira's gone, and both aliens are wounded. They need my help, and I can't let them down. I don't know why they don't go back to the alien ship and get healed. They don't trust it, and I guess I understand that. I'm used to technology, and it still freaks me out to think of the cold, emotionless voice of the computer.

Also, I know what it's like to fear the doctor.

My feet sink into the snow with each step, and my leather boots quickly become sodden. There's no time to fix them or reinforce the insides with warm dvisti fur. Time is of the essence. I trudge forward over a drift-covered hill, and when I see the pink, wispy eyelashes of trees in the distance, I pick up the pace.

I have Haeden's knife, since he's too wounded to use it. The bone handle is smooth in my hand, though it's a little too big for my human-sized palm to grip comfortably. Everything here on Not-Hoth is sa-khui sized. I'm a decent height for a girl, but the average person on this planet seems to be seven feet tall, and the snows are deep, the caves huge. Really, everything feels just a wee bit too big. It's like I've been transported to a Goldilocks house, except instead of just right, everything's too large.

It's just one more thing I must adjust to in an endless stream of new and frightening things.

Weeks ago, I went to sleep in my own bed, and the biggest concern on my mind was when I'd start my chemo. Then, a few weird dreams later, I woke up, shivering and weak, pulled from a tube and told I'd been abducted by aliens.

Which would have been hard to believe except that I'd come from Houston, Texas, and my air conditioner had gone out, so I'd spent the evening sweating and praying the repairman would come by soon. When I'd woken up? It had been so cold my bare feet had stuck to the metal floors, and strange blue aliens occasionally entered to chat with the humans.

It's hard to call someone a liar when they're seven feet tall, blue, and horned. After seeing that, I had to believe. And even though sometimes I want to pinch myself until I wake up, I have to accept the fact that I'm now living on a snow planet with no chance of getting home, and I'm infected with an alien parasite that allows me to endure the harsh conditions of Not-Hoth. Not exactly how I'd visualized my future at all.

According to the ship's medical computers, I'm cancer-free now. I don't know if it's wrong, or if it's Not-Hoth's atmosphere or the new "cootie" (as some of the girls call it) living in my chest.

All I know is that the inoperable brain tumor isn't showing up in scans. And for the first time in the last year, I have hope.

When I get to the trees, I move to the closest one and touch the bark with my fingertips. It feels spongy and damp despite the chill in the air, and not sturdy enough to support a massive, muscled alien. I have no idea if this will work, but I'll give it a shot. I owe the sa-khui my life, and so I'm going to do my best to help Haeden and Aehako.

Kneeling down, I begin to hack at the base of the first tree. The knife sinks in with a squishing noise, and sap squirts out onto the snow. Ugh. I wrinkle my nose and keep cutting, determined. Kira's gone, and they're wounded, so I'm the only one that can help.

The snow crunches nearby.

I stand upright, surprised. It almost sounded like a footstep. "Hello?" I turn around and look. "Aehako?"

No one's there. The snowy landscape is barren, nothing but rolling drifts as far as the eye can see.

I must be imagining things. I'm not alone out here in the wild. There're creatures everywhere, or so the hunters tell me. It could be one of the porcupine-looking things. Or maybe it's a rabbit. Or . . . whatever the rabbit equivalent on this planet is.

I can't be a silly chicken and freak out at every little sound, though. I turn back to the tree and continue hacking at it.

I hear the crunch of snow again, and a moment later, a heavy thudding. My blood feels like it's surging in my ears, and I press a hand to my head, wincing.

Something slams into the back of my head, and I pitch forward into darkness.

Even there, the strange purring follows me.

The fourth novel in the international publishing phenomenon the Ice Planet Barbarians series, now in a special print edition with bonus materials and an exclusive epilogue!

Harlow receives the shock of her life when she wakes up to see Rukh, a stranger who has clearly been on his own his whole life, but she soon learns that there is much more to this gruff, barbaric alien than the savage he appears to be.

The ice planet has given me a second lease on life, so I'm thrilled to be here. Sure, there are no cheeseburgers, but I'm healthy and ready to be a productive member of the small tribe. What I didn't anticipate? That there'd be a savage stranger waiting nearby, watching me. And when he takes me captive, the unthinkable happens...I resonate to him.

Resonance means mating, and children...but I don't know if this guy's ever been around anyone before. Rukh is utterly wild. He's completely uncivilized, can't speak more than a few words and doesn't know what clothes are. A human--a human woman--is mystifying to him. He's truly a barbarian in all ways, and like Tarzan in the stories, he's kidnapped me and claimed me for his own.

Being with him means I'm going to have to teach him to speak, how to kiss, and how to be human. Or even alien. It should be a terrifying prospect...so why is it that I crave his touch and hunger for more?

About the author:
Ruby Dixon is an author of all things science fiction romance. She is a Sagittarius, a Reylo shipper, and loves farming sims (but not actual housework). She lives in the South with her husband and a couple of geriatric cats, and can't think of anything else to put in her biography. Truly, she is boring.
Posted by Rachel @Waves of Fiction at 12:00 AM