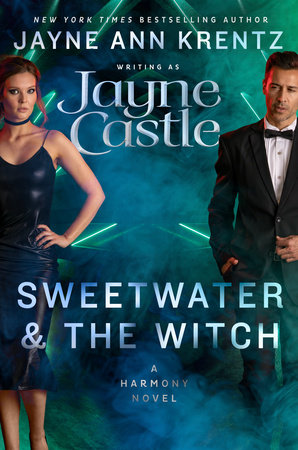 Sweetwater & the Witch (Harmony/Ghost Hunters #15) by Jayne Castle
Publication Date: September 20th 2022 by Berkley
Pages: 304
Source: Publisher
Rating: ★★★★
Links: Amazon | Barnes & Noble | Kobo | Goodreads
My Thoughts:
Ravenna has special talent perfectly suited to her job as matchmaker. However, she has one client she can’t seem to get right, Ethan Sweetwater. Trouble is he’s part of an influential family on Harmony and so it’ll be tricky dropping him as a client. Instead of dumping him they agree to do a date assessment where she goes on a date with him. Ravenna gets more than she bargained for though when the date puts her in the sights of a deranged artifact hunter. Also, there’s someone from Ravenna’s past on a mission to take her out. Ethan is supposed to be a mild-mannered engineer, but it’s lucky for Ravenna that he’s more than that, carrying on the family tradition of hunting down bad guys, and he’s set on protecting Ravenna!
Sweetwater & the Witch was set in the futuristic world of Harmony and in the glitzy town of Illusion Town. It’s sort of like a futuristic Las Vegas/prospecting town where the hunt for magical artifacts is like mining for gold was on Earth back in the day. A lot of the populace, like Ravenna and Ethan have supernatural powers. Ravenna’s is a little more dangerous and is the reason she has some crazy people after her.  Ethan and Ravenna’s fell for each other little by little, while trying to stay one step ahead of the bad people and stay alive. I had my suspicions about why Ethan’s potential matches were always failing, and I was right. Can’t leave off without mentioning Ravenna’s sidekick, Harriett, the fun-loving dust bunny who could turn into a force to be reckoned with, getting all “sleeked out” and ready to attack whenever Ravenna or Ethan was in danger! I just loved the dust bunnies!
Sweetwater & the Witch was a fun, action-packed futuristic mystery with a sizzling romance as its center! It is part of the long running Harmony series but can easily be read as a standalone and enjoyed.
4 Stars

Welcome to the world of Harmony, where--despite its name, things are anything but--danger lurks just beneath the surface in this new novel by New York Times bestselling author, Jayne Castle.

If there's something Ravenna Chastain knows, it's when to end things. And after she almost winds up the victim of a cult that believes she's a witch, it's easy to walk away from her dead-end career, ready for a new start. But where to find a job that would allow her to use her very specialized skill set? The answer is clear: she becomes a matchmaker.

But even a successful matchmaker can't find someone for everyone, and Ravenna considers Ethan Sweetwater her first professional failure. After nine failed dates, Ravenna knows it's time to cut Ethan loose. But Ethan refuses to be fired as a client--he needs one final date to a business function. Since Ravenna needs a date herself to a family event, they agree to a deal: she will be his (business) date if he will be her (fake) date to her grandparents' anniversary celebration.

What Ethan fails to mention is that attending the business function is a cover for some industrial espionage that he's doing as a favor to the new Illusion Town Guild boss. Ravenna is happy to help, but their relationship gets even more complicated when things heat up--the chemistry between them is explosive, as explosive as the danger that's stalking Ravenna. Lucky for her, Ethan isn't just an engineer--he's also a Sweetwater, and Sweetwaters are known for hunting down monsters...

Posted by Rachel @Waves of Fiction at 9:22 AM