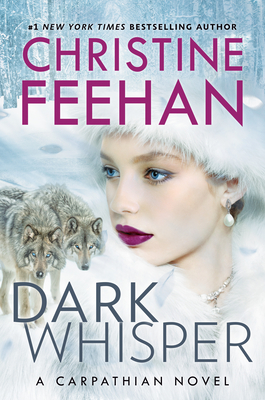 Dark Whisper (Carpathian/Dark #32) by Christine Feehan
Publication Date: October th 2022 by Berkley
Pages: 448
Source: Publisher
Rating: ★★★★
Links: Amazon | Barnes & Noble | Kobo | Goodreads
My Thoughts:
Vasilisa is one of the Lycan royals with special powers to defeat demons who come from the underworld and able to close off portals from there, too. She knows there’s trouble brewing but not sure where it’s coming from. She also knows that she protects the soul of her lifemate and he is now near.
Afanasiv is a Carapathian ancient who has fought evil for many centuries. He and Vasilisa must fight many battles as they navigate their new status as lifemates and get to know each other, But a lot of this must be put on the back burner as there is a traitor trying to capture all the royals and imprison them in the Underworld.
Vasilisa was a strong fighter, selfless in her mission to protect her people and Afanasiv is a force to be reckoned with too. They’re well matched and together make a powerful, unified front in a battle between good and evil. There’s a lot of battles! At almost 500 pages, this is a long book that took me a while to get through. I enjoyed it even though a lot of it went over my head because I hadn’t read the previous books. I will say the story had many names that tripped me up a bit. If it’s a side character it doesn’t really make a difference in my enjoyment of the story, but if it’s a main character like Afanasiv, it’s something that jars me up every time I read the name.
Dark Whisper can be read as a standalone, but I think fans of this long-running series will appreciate it more than someone just jumping in (like I did, lol). There’s a lot going on and world building that has happened. I’m still not sure exactly what a Carpathian is. The story is an exciting, action-packed adventure with plenty of chemistry and steam between Vasilisa and Afanasiv!
4 Stars

Vasilisa Sidkorolyavolkva is a Lycan of royal blood. She knows what is expected of her, but all she wants is to be out from under her family's watchful eyes. There is a fire inside her that is building. A restlessness coupled with a sense of growing dread. Every day she feels the weight of the legacy passed down through generations. The prophecy that says a man will come to claim her as his mate, and that she will guard his soul. She knows nothing about him except that he is hers. But nothing seems real until the night she meets him in the flesh....

Afanasiv Belan is a Carpathian, an ancient one. In all the centuries of his existence, no one has ever affected him like Vasilisa. He can see into her mind and feel what is in her heart. They are so alike, warriors bound by honor and plagued by secrets. They both know they must reveal the darkest parts of their souls if they hope to survive and protect the ones they love.

But if they claim each other as lifemates, it will change them down to the bone. They will become something more--something feared by both of their kinds....

The giveaway is open to US Residents only. Fill out the rafflecopter for a chance to win. Good luck!
a Rafflecopter giveaway
Posted by Rachel @Waves of Fiction at 12:00 AM