Review: About that Night by Julie James 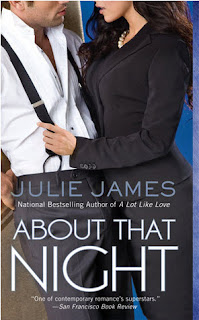 
About the book
He's Playing Games

Though Rylann Pierce tried to fight the sparks she felt for billionaire heir Kyle Rhodes the night they met, their sizzling chemistry was undeniable. But after being stood up on their first date, Rylann never expected to see him again. So when she finds herself face-to-face with Kyle in a courthouse nine years later, she's stunned. More troubling to the beautiful assistant U.S. attorney is that she's still wildly attracted to him.

But She's Making The Rules

Just released from prison, Kyle Rhodes isn't thrilled to be the star witness in a high-profile criminal case—but when Rylann comes knocking at his door, he finds she may be the one lawyer he can't say no to. Still as gorgeous and sharp-tongued as ever, she lays down the law: she doesn't mix business with pleasure. But Kyle won't give up on something he wants—and what he wants is the one woman he's never forgotten.


My Thougths
Julie James sure knows how to write contemporary romances with witty characters, plots that attract, and steam that doesn’t quit.

I loved Kyle and Rylann’s story, the third FBI installment, and my only regret is that I have just one more book of James to keep me entertained. I plowed through her series like a starving puppy and all I can say is I want more!

As with her other books, James doesn’t rely on drawn out drama, but rather perfectly timed tension. She keeps her readers on the edge of their seat, but truly delivers a satisfying conclusion every single time.

Call me a true Julie James fan and count me in for whatever this author decides to pen. I love her writing!