Review: Rules of the Game by Sandy James 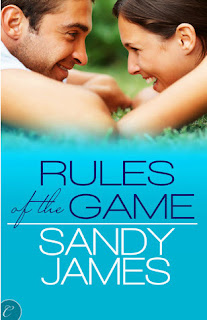 
About the book
Kathryn West has it all – she’s a confident, bestselling author living it up in New York City. Too bad she doesn’t actually exist, and is only timid Maddie Sawyer’s pseudonym. Determined to attend her high school reunion with a man right out of one of her racy romance novels, she plots to find a sexy bad boy who’s up to Kathryn’s standards.

She finds Mr. Perfect shooting pool in a biker bar. He’s a blue-collar hunk who just happens to look great in leather. But the mysterious Scott Brady has some rules of his own: he won’t agree to her deal unless she poses as his girlfriend in front of his family and friends first.

As the reunion nears, Maddie tries to maintain her carefree façade, knowing she’ll soon face some old ghosts. She’s torn between her growing attraction to Scott and the nagging feeling that he’s hiding something important. Will she still want him when she finds out his secret? What about when he discovers hers?


My Thoughts
First Half: 4 Stars
Second Half: 2.5 Stars
This was a fun and quick read that I easily breezed through in one sitting. I feel the two main characters Scott and Maddie were well crafted and their personalities blended perfectly. Scott is your typical "too-good-to-be-true" hottie that came through for Maddie more than once. I really fell for his character and enjoyed all of his moments in the book. I really like Maddie until she came head to head with Scott especially when all he was trying to do was help her out. She was a strong character, but I wish she would have given Scott more credit.

As far as the flow of the story, Rules of the Game was going so well for me and I was loving this book right until the point where Scott and Maddie get to the Reunion and all hell breaks loose, which was about mid point in the story. Too much happened to quickly and poor decisions were made only causing me to feel frustrated over the course of events.

Overall, it was a fun book that I mildly enjoyed. There were flaws, but it didn’t stop me from racing to the finish line. I enjoyed this one more so at the first half and less at the final hour.