Review: Unravel Me by Kendall Ryan 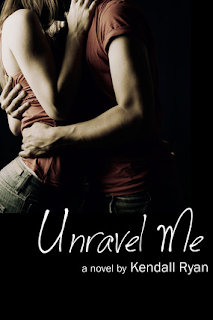 Psychology student Ashlyn Drake’s neat, orderly life takes a turn for the crazy when she finds the perfect subject for her amnesia thesis – a young man without any memory of his previous life, including the murder he’s accused of committing.

Against all common sense, Ashlyn’s drawn to him like a moth to a flame. Perhaps it’s that he’s so incredibly male, and even handcuffed to his hospital bed he could pass for a cologne ad – Scent de Insanity. Or perhaps it’s because she’s spent too many lonely nights studying. Either way, she’s determined to help him solve the mystery of his past. She begins to unravel who he was before, using his cryptic tattoos, and his paintings that scream of a dark past as her only clues. When she finally learns his secret there’s no telling which one is the real him, the gentle lover she’s fallen for or the troubled man with a dark past.


My Thoughts
Unravel Me by Kendall Ryan is a perfect love story for those looking to breeze through a quick and entertaining novel. It’s filled with a few slight flaws, but overall I enjoyed the story and characters that had good chemistry coupled with a decent plot.

When Ashlyn, a psychology post graduate student, is offered an opportunity to interact with an amnesia patient for her doctorate thesis, the last thing she expected would be for her to feel an immediate attraction to him. Logan is hospitalized after a homicide incident causes him to lose complete memory of his past. He’s being investigated for a murder, and after constant surveillance and interrogation, he’s not about to cooperate with Ashlyn and her project. However, after weeks of continual contact, these two begin to form a connection leaving them to wonder where they’ll end up when he regains his memory.

Overall, Unravel Me did its job… it managed to deliver hot and steamy scenes between two characters with obvious chemistry. However, this story wasn’t without its slight issues. I felt the pace was extremely choppy and storyline would take presumptuous leaps leaving me to wonder how or where I missed a scene or two. I liked these two characters enough to keep tapping the next page on my eReader at a furious pace, but to say it’s a perfectly blended and put together novel would be giving Unravel Me more credit than it deserves.

So if you’re looking for light, romantic entertainment and you’re willing and able to have logic take a back seat, this story will surely steam your glasses. I enjoyed it for what it was worth and I’d definitely read other novels by Ryan. Fairly well done.