Blog Tour Review & Giveaway: Before You Break by Christina Lee

Today I'm thrilled to be part of the Blog Tour for Before You Break by Christina Lee because this story was lovely! My tour stop includes my review and an awesome giveaway so be sure and scroll down to the bottom and enter for a chance to win. 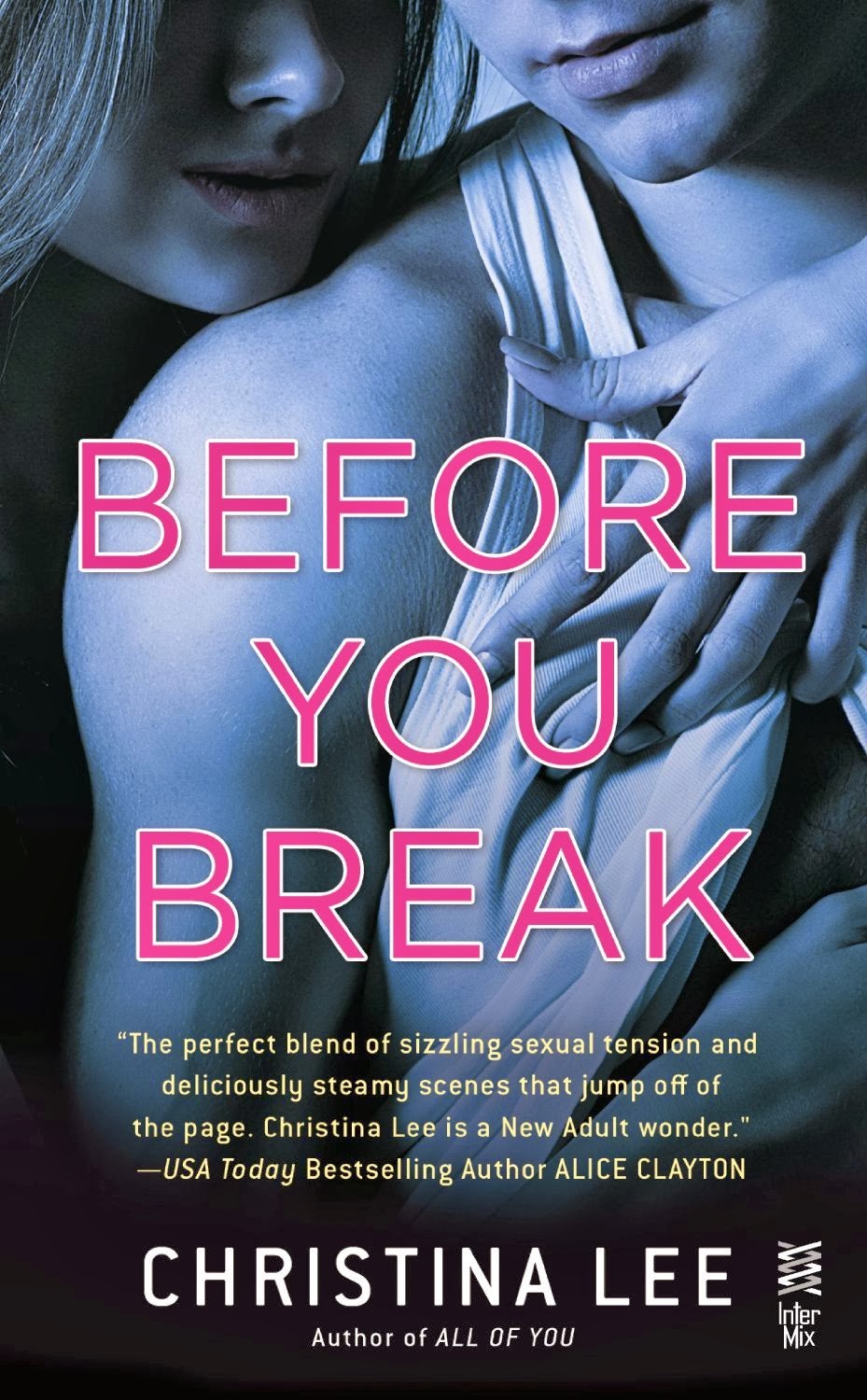 A sexy, emotional New Adult romance about a bad boy on the edge and a good girl about to lose control…

The star catcher of the college baseball team isn't supposed to have skeletons in his closet. But Daniel Quinn is hiding a guilty past so dark he refuses to let anyone get close. Except there’s something about gorgeous, studious Ella Abrams that goes beyond the electric attraction between them—something that makes him want to open up.

Ella has suffered enough heartache and guilt to fill one of her psychology textbooks, but she keeps that part of herself hidden behind a bubbly exterior. Until she receives an anonymous call while working the suicide helpline and the voice on the other end touches something inside of her that she can’t ignore.

Soon Ella and Quinn’s physical connection heats up, even as their deep and revealing hotline talks intensify. But by the time Ella realizes that her seductive jock and her sensitive caller are the same guy, it might be too late to save him—or to stop herself from falling too far.

*A companion novel to ALL OF YOU

Before You Break was a touching of story of loss, grief, and guilt weaved in with swoony romance.

Both Ella and Quinn have been marked by death and sorrow.  Ella has essentially come to terms with her pain and channeled it into something meaningful by choosing a career path that will help others: getting a psychology degree.

Quinn has not begun the healing process, and self-loathing and guilt cast a dark shadow over his life.  That is until he’s desperate enough to call into a suicide prevention hotline and connects with Ella who volunteers there.  Not realizing they actually know each other Quinn bares his soul to Ella, one phone call at a time, feeling a for once that he has an understanding ear.  Ella is deeply affected by Quinn’s pain, and she wants to help.  She lost her brother, Christopher when he committed suicide, and Ella’s experienced some of the same feelings of guilt and helplessness that Quinn’s dealing with.

Ella’s personal life isn’t quite as healthy. She’s remained in a relationship with her boyfriend, Joel, even though the spark has long since gone and she suspects he’s not entirely faithful.  But because he knew her brother Christopher, she can’t help but hold on.  Meanwhile, Quinn, who is a student in Joel’s frat house, captures her attention with his quite seriousness, not to mention his smoking hot good looks.  During their interactions, Ella feels a deep connection, and attraction to Quinn, but she also senses sadness in him as well.

Quinn sees the way Joel treats Ella and it ticks him off.  Ella is sweet, gorgeous, and fun with a personality that just sucks him in. A smoldering attraction forces their situation to a head, but the big question is whether Quinn can forgive himself enough to allow for happiness with Ella.

Quinn and Ella have a powerful draw and chemistry, but beyond that they have a deep sense of connection because they unknowingly share similar pain.   Ella shares openly with Quinn and this along with his phone calls to “Gabriella”, gives him the courage to open up and start healing.  Their romance was HOT even though they tried to take things slow.  When you’re attracted by more than just the physical person, the bond is usually more intense.  Lots of steamy scenes sure to get your heart racing!

This was my first time reading Christina Lee, but it won’t be the last.  She wrote an emotionally charged romance that enthralled me from the first page.  I can’t wait for the next story which centers on Rachel: Whisper to Me.

Raves for Christina Lee’s All of You

“This is one New Adult you don’t want to miss.” —New York Times and USA Today bestselling author A. L. Jackson

At the theater, we bought popcorn, Milk Duds, and large sodas. After we settled in our seats in the crowded room, I opened the box of chocolate caramel confections and dumped them in the large tub.

“Sweet and salty—it’s a must-have for movie watching.”

“Yes, seriously.” I picked up a Milk Dud, flanked it with two pieces of popcorn, and then brought it to his lips. “Here. I guarantee you’ll fall in love. You’ll never watch a movie without them again.”

“If you say so. . . .” He dragged the sweet and salty mixture into his mouth but kept my fingers enclosed between his lips. I held in a gasp while he ran his tongue over my thumb and then sucked on my forefinger before releasing my hand and chewing what remained.

“Agree,” he said around a mouthful of popcorn. “Wouldn’t want to be without them ever again.”

Quinn’s gaze latched on to mine. It felt like a bundle of feathers had been let loose in my stomach. “Guess you’ll have to come to every movie from now on. So I don’t forget.”

Speechless wasn’t even the word for what I felt in that moment. Dumbfounded might have been more like it, or maybe just struck stupid, because I couldn’t even move my lips to form any coherent words.

When the movie previews began, he turned toward the screen and reached for my fingers, interlacing our hands. Then he leaned close to my ear and said, “I expect you to feed me just like that the entire movie.”

As part of this post we have this generous giveaway provided by Penguin Intermix. Simply fill out the rafflecopter for a chance to win. Good luck!


a Rafflecopter giveaway
Posted by Rachel @Waves of Fiction at 5:00 AM