Review: A Girl by Any Other Name by M.K. Schiller 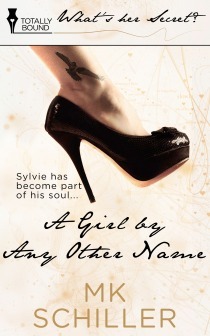 Everyone tells him he needs to move on, but how can a man function without his heart?

Ten-year-old Caleb Tanner wants nothing to do with Sylvie Cranston, the annoying weird girl who moves next door to him and gets him in trouble for swearing. But at twelve, they become friends when he teaches her how to hook a fishing line and she shows him the value of a selfless act. At fourteen, he falls in love with her.

At sixteen, she dies.

Or so he’s told. But Cal never believes it. Sylvie has become part of his soul. He knows her like the steady beating of his own heart. He’d know if she was dead. Cal looks for her, prays for her and finally he just waits for her.

Nine years later, she walks into the community college English class Cal is teaching. Only this girl claims her name is Sophie Becker and she doesn’t know him. Cal knows better. He’s determined to get the girl he loves back—and protect her from the danger that took her away all those years ago.

I loved A Girl By Any Other Name! I read it in less than one day only putting it down so I could sleep.

The story begins by taking us back to the past where Caleb and Sylvie first meet at ten years of age. Their story seamlessly drifts back and forth from present to past, establishing the intense and profound love between these two.

Sylvie Cranston moves with her father next door to Caleb Tanner in Prairie Marsh, Texas after her mother dies.  Caleb and Sylvie get off to a less than good start all the while cracking me up in the process.  Over time though, these two become very important to each other, and close even though Sylvie is definitely hiding something.  Their friendship gradually turns into something more as the years pass, although Sylvie seems to keep Cal at arm’s length when he clearly wants so much more. The danger Sylvie has been hiding from abruptly crashes into their lives, and Sylvie dies in the process.

Cal can’t accept this. In his heart he knows Sylvie is still alive.  He goes on with his life, barely, all the while looking for her and never giving up.  Ten years pass but the memory of Sylvie is never out of Cal’s mind, his love for her haunting him, making it impossible to ever have a meaningful relationship.

This all changes when Sophie Becker enrolls in his college English class. Cal believes her to be Sylvie, but she denies his claims. Sophie has another thing coming if she thinks Cal will just give up, though.

Oh I just loved this story so much! The gradual friendship built between Cal and Sylvie when they were young was so very sweet and wistful! I just love a Southern gentleman and Cal’s momma raised this boy right! I adored the way he stuck up for others, not only Sylvie but his little sister and mother as well. The relationship with his little sister in the beginning cracked me up so much; all his internal thoughts were hilarious!  This story is told primarily in Cal’s POV and I loved being his very male mind.

Cal in the present is very much possessive and protective, and who could blame him? The romance was wickedly HOT! Fiery passion that comes from intense longing and emotional connection!  Oh, man I fell so hard for Cal! Yet, issues from the past still lurk and shadow the present brightness.

It’s hard to write a review without spoiling things but I think the blurb makes it clear what is happening here.  That doesn’t mean you won’t be glued to your e-reader trying to piece everything together because so much is still a mystery.  I did wonder a couple of times why Cal didn’t piece some of this together a little sooner, but that didn’t dampen my reading pleasure at all.

I can’t recommend this story more! M.K. Schiller’s addictive writing stirred up so many emotions! This is a story of undying love and longing, heartbreak and tragedy, but also filled with witty humor, and seriously hot scenes! A Girl By Any Other Name will have you sighing in satisfaction, and your heart soaring from the high!