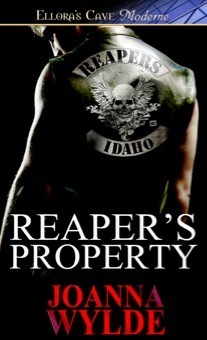 Marie doesn’t need a complication like Horse. The massive, tattooed, badass biker who shows up at her brother’s house one afternoon doesn’t agree. He wants Marie on his bike and in his bed. Now.

But Marie just left her abusive jerk of an ex-husband and she’s not looking for a new man. Especially one like Horse—she doesn’t know his real name or where he lives, she’s ninety percent certain he’s a criminal and that the “business” he talks with her brother isn’t website design. She needs him out of her life, which would be a snap if he’d just stop giving her mind-blowing orgasms.

Horse is part of the Reapers Motorcycle Club, and when he wants something, he takes it. What he wants is Marie, but she’s not interested in becoming “property of”.

Then her brother steals from the club. Marie can save him by giving Horse what he wants—at home, in public, on his bike… If she’s a very, very good girl, she’ll get lots more of those orgasms only he can offer, and he’ll let her brother live.
Maybe.

I’m fairly new to romances set in a motorcycle club. The only ones I’ve read have been by Kristen Ashley and they were a little tamer than this read, but Reaper’s Property is an addictive start to this series.

Marie is fresh out of her crappy marriage. She’s sorry she put her hopes and dreams of college and more on hold to marry her high school sweetheart, Gary.  He turned out to be an abusive, cheating a-hole, so she’s back at the trailer she grew up in with her wayward, but loveable brother, Jeff.

Marie feels indebted to Jeff because he took her back into their home even though she was penniless and couldn’t contribute any money at first. This is why when the Reaper’s Motorcycle Club comes over, clearly involved with some sort of business with Jeff, Marie looks the other way. Well, for the most part. When she gets a glimpse of Horse, the hot, gorgeous club member, she melts into a pile of goo, and her body is overtaken by lustful thoughts.  Horse is something else, let me tell you.  Let’s first get to his “club name”:

“So aren’t you gonna ask?”
I studied him, narrowing my eyes. I had a bad feeling about this. But the words that came out of my mouth, completely beyond my control.
“So why are you called Horse?”
“Cause I’m hung like one,” he replied, smirking.

So, yeah, plenty of arrogance and testosterone there, but I’m certainly not opposed to a confident, alpha type male.  Horse is that and more, but he does have a sweet side, especially when it came to Marie, and it surprised me.  Marie and Horse hit it off until a situation makes her uncomfortable and she basically tosses Horse out on his behind.  They try again and Marie locks it down once more because of jumping the gun on assumptions. Horse is hurt and angry so when Jeff, Marie’s brother gets himself into hot water (scalding hot) with the club, instead of taking his life, Horse negotiates and takes Marie as payment to be his “house mouse” and basically his sex slave.  Marie doesn’t realize that Horse feels more for her, and is trying to protect her while at the same time acclimate her to life in a motorcycle club.  This is not her fault because Horse doesn’t communicate this “little” tidbit of information to her.

Overall I enjoyed this read, but there were things about the story that bugged me. To be honest, it was mainly Marie.  I get that the motorcycle club life might be shocking, but Marie was so judgmental to begin with it was annoying.  And what’s worse is she couldn’t even stand by her own convictions because every time she looked at Horse or rubbed up against him all her common sense went out the window!  Why bother to be so judgmental in the first place if you’re just going give in two seconds later?! I seriously wanted to shake some sense into Marie when it came to her idiot brother and other people, as well. Grrr!! The acronym TSTL “too stupid to live” fit Marie perfectly a couple of times by the end.

Horse was a decent and honorable man, in spite of his spouting off, but I’m still not sure if I’m cut out for motorcycle club books because I didn’t like the way some of their “sweet butts” were treated.  I don’t care if these women offered up themselves willingly, I still didn’t like it.  These men didn’t have to stoop so low. Yuck. Still, this story did hold me captive until the end.  I will say that I’ve already started the next book in the series, Reaper's Legacy, and I already like it more.