Review: One Plus One by Jojo Moyes 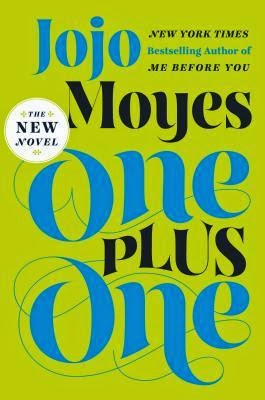 
One single mom. One chaotic family. One quirky stranger. One irresistible love story from the New York Times bestselling author of Me Before You

American audiences have fallen in love with Jojo Moyes. Ever since she debuted stateside, she has captivated readers and reviewers alike, and hit the New York Times bestseller list with the word-of-mouth sensation, Me Before You. Now, with One Plus One, she’s written another contemporary opposites-attract love story that reads like a modern-day Two for the Road.

Suppose your life sucks. A lot. Your husband has done a vanishing act, your teenage stepson is being bullied and your math whiz daughter has a once-in-a-lifetime opportunity that you can’t afford to pay for. That’s Jess’s life in a nutshell—until an unexpected knight-in-shining-armor offers to rescue them. Only Jess’s knight turns out to be Geeky Ed, the obnoxious tech millionaire whose vacation home she happens to clean. But Ed has big problems of his own, and driving the dysfunctional family to the Math Olympiad feels like his first unselfish act in ages . . . maybe ever.

One Plus One is Jojo Moyes at her astounding best. You’ll laugh, you’ll weep, and when you flip the last page, you’ll want to start all over again.

My Thoughts
Love!!! The cast... The story... The plot... The steady but never over the top drama... The unique perspectives.... Yes I quite like this book.

The first book I came across by Jojo Moyes was Me Before You. I read that earlier this year and have not stopped thinking about it since. Easily that book will land on my Top Favorite Reads for 2014… without a doubt. So, when I heard that Moyes had a new novel coming out back in July, I was extremely excited to get my hands on One Plus One. Luckily I was able to acquire a copy at the ALA Convention in Las Vegas, and I found myself lost in the pages shortly thereafter.

I’ll admit, I had high expectations of this book because Me Before You was absolutely mind blowing for me in the best emotional, gut-wrenching way possible, so I was a bit nervous to dive into another book by Moyes for fear of disappointment. Well as you can see by my 5 star rating, I fell in love with this novel as well.  One Plus One exposed me to a cast of characters that I won’t easily forget. This story has moments of struggle, love, heartbreak, hope and perseverance that made my reading experience an absolute joy.

I’ve noticed over the years that I go through reading phases - as evident by my genre jumping that I tend to enjoy, and lately I’m looking for those stories that have something meaningful, thoughtful and provocative in their delivery. Well One Plus One had it all for me. I took me along-side Jesse, Ed, Tanzie and Nicky as they go on a road trip of a lifetime that altered all of their lives.

Prior to this road trip, Ed was going through a tough time when he found himself convicted of insider trading that was truly a result of a spontaneous careless act that in no way reflected his character. As his life began to unravel, he stumbled upon a young, single mother of two who was on her way to take her daughter to a Math Olympiad in the hopes of winning the competition to use the funds to pay for schooling. The four, including the ginormous family pet, traveled at slow speeds to the competition and along the way began to develop a relationship that altered the course of their future.

Jesse was working a couple of jobs to make ends meet for her and her two kids. When her youngest daughter Tanzie was tested and accepted into a prestigious school, Jesse faced the hard fact that she couldn’t come up with the extra funds unless her daughter competed and placed in a Math Olympiad. They set off on an adventure that immediately hit a roadblock… that was until Ed came to their rescue and offered to get her family to the competition that was a few days away by car.

I simply adored all of these characters to an immense degree. Ed was handsome, geeky, compassion and funny. Jesse was hard working, optimistic and full of life. Tanzie and Nicky were the perfect complement to this cast, where you have a math genius and her brother a social outcast. When they all collide, there are a series of mishaps, discoveries and revelations that all lend for a heart-warming adventure that moved my emotions all over the map.

Well as you can see, I’ve clearly shared a lot here, mainly because I don’t want to forget one bit of it. It’s stories like One Plus One that remind me how magical reading can be. Jojo Moyes has cemented a spot on my bookshelf, and I can’t wait to continue reading her stories that are filled with emotional substance and heart. One of my gem picks from ALA and I finished this in two sittings. Perfection!!

Email ThisBlogThis!Share to TwitterShare to FacebookShare to Pinterest
Labels: 5 suns, arlene's review, jojo moyes, one plus one