Review & Movie Release: The Best of Me by Nicholas Sparks 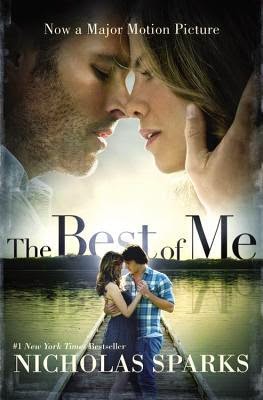 "Everyone wanted to believe that endless love was possible. She'd believed in it once, too, back when she was eighteen."

In the spring of 1984, high school students Amanda Collier and Dawson Cole fell deeply, irrevocably in love. Though they were from opposite sides of the tracks, their love for one another seemed to defy the realities of life in the small town of Oriental, North Carolina. But as the summer of their senior year came to a close, unforeseen events would tear the young couple apart, setting them on radically divergent paths.

Now, twenty-five years later, Amanda and Dawson are summoned back to Oriental for the funeral of Tuck Hostetler, the mentor who once gave shelter to their high school romance. Neither has lived the life they imagined . . . and neither can forget the passionate first love that forever changed their lives. As Amanda and Dawson carry out the instructions Tuck left behind for them, they realize that everything they thought they knew -- about Tuck, about themselves, and about the dreams they held dear -- was not as it seemed. Forced to confront painful memories, the two former lovers will discover undeniable truths about the choices they have made. And in the course of a single, searing weekend, they will ask of the living, and the dead: Can love truly rewrite the past?

It’s been a while since I’ve read a Nicholas Sparks book, and I can always count on this author for two things. First, he’s definitely going to share an emotional story, full of angsty love, steady drama and like-able characters. And second, it’s inevitable that he’s going to either kill off a main character or end the story in a way that leaves you screaming “Are you kidding me?!?”

Well in The Best of Me, Sparks delivered as usual. I don’t think I’m being spoilery, but rather sparklery when I say that the love is angsty and the wrong character dies. I should have known... Yet I was still slightly surprised Sparks pulled the trigger. No pun intended. So why did I read it? Well I want to see the movie and in true nerd fashion, I can’t watch it without reading the book first.

In The Best of Me, we get to meet Amanda and Dawson when they fall in love their senior year of 1984. In a time and place where family dictates who and how to love, Amanda and Dawson share a true romance, but are forced to go separate ways because of family expectations and loving someone so much that it’s best you set them free. After over twenty years of no contact, they come together to bury their old friend Tuck and because of him, they spend a weekend rekindling the love they once shared. However, Amanda has a husband and family, and she can’t quite fathom doing the selfish thing and pursuing her true love at the expense of her family’s happiness.

First, I have to admit that I really liked the novel. It’s no doubt that Sparks is a good storyteller. He has an interesting way of weaving multiple storylines into a book without overwhelming the reader. As the story progressed, I felt the momentum speed up and the storylines quickly coming to a convergence, which was exciting.

As far as the characters go, despite never getting to know Amanda’s kids and husband until the final hours of the novel, I still appreciated her desire to put them first. She was a relatable and likeable character that was hard not to fall for. Dawson is your typical too-good-to-be-true handsome catch and I’m quite surprised at how his life unfolded over the years. This character sacrificed quite a bit for a love that never would come to fruition. I felt true sympathy for him and his lot in life.

Overall, there were elements of the story I would like to see change, as with any Sparks novel. I often wonder why he feels compelled to be trigger happy with some of the best characters he develops. However, despite his heartbreaking tendencies, I still enjoyed this story and I can’t wait to see this in film.

The Best of Me