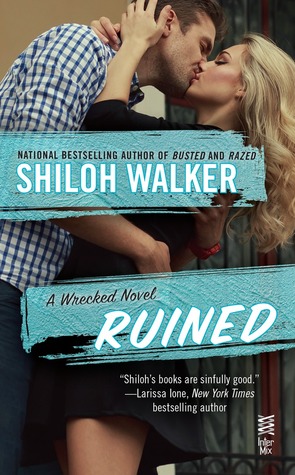 From the national bestselling author of Busted and Razed comes an unforgettable story of a love that transcends tragedy...

As one of the Barnes brothers, Sebastien has always felt blessed. Not only does he have an amazing family, but he’s become a Hollywood golden boy who has everything he’s ever wanted—with one exception. He’s had a thing for Marin since he was a kid, but when he finally summons the courage to ask her out, she turns him down. Marin is ready to settle down, she wants commitment and stability, and Sebastien is still too much of a playboy, caught up in the wild life of the spotlight.

Still reeling from the rejection, Sebastien’s luck runs out later that night when he saves a girl from an assault. The shining knight role fits him just fine, but his armor—and his perfect life—become tarnished when the near-deadly attack lands him in the hospital. Physically scarred, he gives up acting and retreats from everybody.

If anyone can pull Sebastien back from the abyss, it’s Marin. But first she has to convince him that beauty is not only skin deep...

My Thoughts:
I loved the premise of Ruined, a once beautiful man, scarred and emotionally damaged getting the girl he’s been in love with for years speaks to me.  After an assault, Sebastien tries to shut everyone out, except for Marin.  Marin won’t go away and he loves that she is a constant in his life even if he thinks it’s just out of pity that she keeps coming around. Marin didn’t want to open her heart to Sebastien before, because she wanted a family and commitment, and Sebastien didn’t seem like he was on the same page.  He was living like a playboy taking all the benefits a much sought after, gorgeous movie star could take advantage of, but all that changed after the assault, and with all the time Marin spends with him, it’s impossible to keep up that guard.

I actually read Ruined in one day, because I had to find out how it all turned out, but there was a fair amount of angst and drama, and that prevented me from completely loving the story.  A lot of that could’ve been avoided if both Sebastien and Marin didn’t assume they knew what the other was feeling, and also if Marin would’ve cleared up a misunderstanding right away, instead of letting it go on.  With all that said, I did enjoy the romance, it was pretty steamy!  Marin and Sebastian were so hot for each other; there was longing on both sides.  Plus, it contains a trope I do love (I won’t spoil the plot by telling which trope) so even with all the drama I did end up enjoying the story more than I thought I would.  I would say if you’re a fan of angst Ruined will definitely be right up your alley.  If not, I’d still give it a shot, because it still might work like it did for me.