Review: Only Her by Sandra Owens 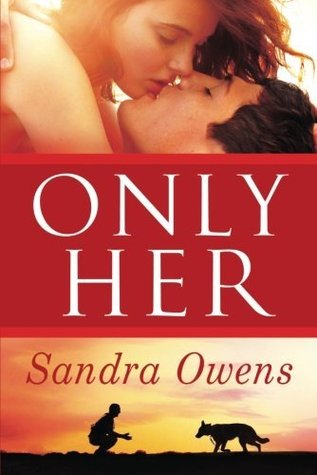 Former SEAL sniper Cody Roberts has returned from Afghanistan with too many demons and a simple wish: to be left alone. Working for K2 Special Services, caring for the war dogs he rescued, playing his guitar—that’s all he wants to do. But Cody is as protective as his nickname, “Dog,” suggests. A man like that can’t sit back when he realizes the beautiful veterinarian next door is being targeted by an unknown enemy.
Riley Austin is desperate to find out who’s poisoning her animal patients, and she’s stunned by her mysterious neighbor’s suggestion that it’s personal. But Cody makes her feel something else, too: a powerful attraction. He insists he’s no good for her, but those haunted eyes and that chiseled body tell Riley that surrendering to their mutual lust is worth the risk. And despite his conditions—no falling for each other, no regrets once it’s over—she’ll fight to love him just as fiercely as he’ll fight to save her.

My Thoughts:
Cody Roberts is home from Afghanistan, retiring as a sniper SEAL, but he can’t stop the nightmares that plaque him.  He knows he’d better get a handle on them or risk his position with K2, the Security Team he works for with his former SEAL mates.  The last thing Cody needs in his life is a woman, but his neighbor across the street is somehow irresistible to him, and clearly in danger.

It takes a while for the obvious to sink in: Riley is being targeted personally.  At first she thought the poisoned pets showing up at her clinic were just a coincidence, but when the attacks become more personal, Riley must acknowledge there is someone out to get her.  Yet, for the first time in her life, Riley doesn’t feel quite so alone knowing her dark, broody, and gorgeous neighbor, Cody, is on her side.

Cody and Riley’s romance had some bumps, as any relationship does.  Cody thinking he was too screwed up to be worthy of Riley long-term, but his protests were pretty weak when you considered his actions.  Riley didn’t let his reluctance stop her from taking whatever Cody could offer, and I was pleased that their setbacks were short lived and nothing over-the-top.  They had a mature relationship, talking things through instead of letting hurt drive a permanent wedge between them.

I’m a huge animal lover, so really enjoyed the animals featured.  Cats and dogs; each given a distinct, cute personality.  Their reactions to each other were too adorable!

What kind of evil person would poison helpless pets?  The villain was quite deranged and horrid, and made this story a nail biter at times. The situation only became more dangerous and sinister for Riley as the story progresses.  By the end, I was on the edge of my seat with worry!  Fortunately, Riley had Cody, as well as the K2 team at her back!

This is the first Sandra Owens story I’ve read, but I’d like to go back and read the other books in this series.  I’m a big fan of romantic suspense and I’m always excited to find an author that can find the right balance between a thrilling, action-filled plot, and romance. Ms. Owens achieved that along with making Riley and Cody feel real and relatable.