Audio Review: A Change in Tide by Freya Barker 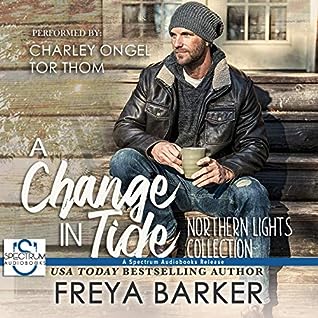 What impact would it have when everything suddenly faded to black?

For Mia, a crowded subway ride changes her entire life. Retreating to the wilderness helps her cope with a world that is suddenly too loud, too turbulent. Her existence safely contained to the small cottage on the lake, she is unprepared for the neighbor that moves across the bay.

A career-ending injury has Jared permanently benched. His reputation as The Enforcer won’t survive the unanticipated responsibilities awaiting him. Away from the public eye, he adjusts to his new reality, under the quiet observation of the intriguing hermit on the other side of the water.

My Thoughts:
Mia lives in relative seclusion in a tiny cabin on a peaceful lake. Her choice after an accident on the subway leaves her dealing with fear of being around crowds or away from her cabin.  Everything is pretty much quiet until a new neighbor moves in across the lake. He’s gorgeous, but Mia doesn’t get the greatest first impression after witnessing him in a compromising situation out on the dock, in full view, with one woman, and then escorting another fully pregnant woman home the next week. Things aren’t always what they seem, which Mia soon learns.

Jared’s professional hockey career ends prematurely when an injury makes it impossible to compete, but the situation enables him to be there for his pregnant sister when her loser boyfriend abandons her.  He gets glimpses of his neighbor across the lake, and he’s intrigued, but it isn’t until they need her help as a midwife that they become more acquainted.

I was kind of jealous of Mia’s situation, not the fear part, but I’d love to live out in a cabin on a beautiful, secluded lake. It sang to my hermit tendencies! Mia left her career behind when it became apparent her panic attacks interfered too much to continue. The arrival of Jared and his sister forced Mia to step up, and actually helped Mia quicken the process of healing.

I really enjoyed the slow build friendship and then romance between Mia and Jared. She can’t help being attracted to him. Who can resist a man with such obvious love of his family? I just loved the bits where Mia uses her skills and knowledge of newborns to help Jordy with her new baby. The baby parts reminded me of that intense time when I just had my kids and when my daughter had her babies. There’s nothing like snuggling a newborn or trying to calm them, which can really take it out of you, lol!

Jared was an intense guy and once he started having feelings for Mia he was pretty focused on her. I did mention in the first scene Mia witnesses him with another woman, but I should say that was it. For those worried about “other woman” drama from that, the woman didn’t have any other part in the story whatsoever. Once Jared and Mia get together, they can’t keep their hands off each other and if I had any complaints it would be that there were maybe too many sex scenes. Still, I really enjoyed their romantic journey and I plan on picking up the next in the series: A Change in View.  Both stories are available on Kindle Unlimited, but I recommend the audio version as well.

Posted by Rachel @Waves of Fiction at 5:15 PM