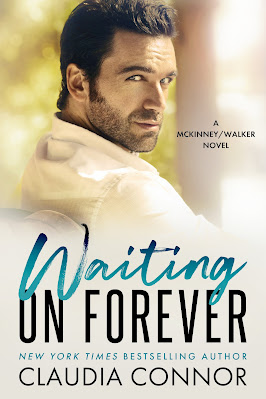 Waiting on Forever (McKinney/Walker Bros #4)  by Claudia Connor
Publication Date: August 9th 2022
Pages: 309
Source: Publicist
Rating: ★★★★
Links: Amazon | Barnes & Noble | Kobo | Goodreads | Apple Books
My Thoughts:
Dallas Walker has moved to Virginia to be closer to his siblings after retiring from the police force and taking a job as a high school teacher. He still has nightmares from his days as a cop. He’s been staying at his sister’s farm but wants his own space and in his hunt for a house he stumbles upon a beautiful, albeit prickly woman. A woman that becomes his neighbor, and they end up running into each other as Dallas fixes up the house and property. He’s intrigued and attracted. Maggie gives off that “stay-away” vibe that only draws him in more.
Maggie had a tragic loss seven years ago, picked up her life and moved from Arizona to Virginia. She’s not looking for friends or romance, her chickens, dog, garden, and pottery keep her more than busy, but now that Dallas has moved next door her ordered world is suddenly thrown off. Maggie feels things she never thought she could feel again, and she slowly, reluctantly starts to let Dallas close.
Waiting on Forever is the fourth installment in the Walker/McKinney Brothers series, but it would work as a standalone. However, you’d miss Dallas’ history and backstory which is important. Dallas and his siblings lost their parents at a young age. Dallas being just fifteen and they were left with their little sister Hannah, only two at the time, to take care of.  The oldest brother, Nick, was just old enough to take on custody so they wouldn’t be separated. The loss and circumstances affected each differently. I adored Dallas, who despite some pretty grim events in his life was positive and oh-so-sweet! He was also persistent, playful, and sexy! Just what Maggie needed to crack open her hard shell.
I’ve been a fan of the McKinney Brothers series and then the McKinney/Walker branch-out since the first book and was happy to get the last brother’s romance! Love Claudia Connor’s writing! She captures raw emotions of grief realistically but manages to keep it from getting too heavy with sprinkles of humor and heavy doses of romance. She can set a love scene that’ll give you tingles and have you rooting for a HEA! I loved catching up with the big, boisterous McKinney/Walker clan, the previous couples with funny kid shenanigans and plenty of cute animals! Maggie has chickens, their antics made me laugh, and boy did it make me want to get a few! If you haven’t read Claudia Connor, I recommend going to the beginning with Worth the Fall.
4 Stars

Her motion activated lights cast faint shadows near the house, but the light didn’t nearly reach the back of the yard. She searched the dense brush along the back, saw movement and fired a warning shot into the air, then another.

She heard the rustling of an animal scurrying away then the sound of leaves crunching and twigs breaking behind her and to her left. She swung around, gun raised.

Dallas stood just a few yards away, stock still, chest bare, in a dark shade of boxer briefs and his hands up in surrender.

“That’s a good way to get shot.” She lowered the weapon. “Sorry.”

He took a step forward toward the faint light she stood in. “I thought you were getting shot. What the hell are you doing?”

“Scaring away whatever was snooping around the chicken coop. Raccoon maybe, or a fox.”

“I guess you know how to use that?”

“I do.” Her lips twitched. “I have a permit and everything, officer.” She lifted the butt a few inches off the ground.

Still looking distressed, he rubbed the heel of his hand up his forehead and into his hair.

“I’m sorry if I scared you. And woke you up.” Obviously, because again, he was standing there in his boxers and…yeah. Just boxers.

“You didn’t wake me. I was outside. With my popcorn.”

“Do you always come outside in your underwear to eat popcorn?”

“Ahh.” She grimaced. “That’s a bad smell. Guess you weren’t kidding when you said you couldn’t cook.”

“Mmm. Is this a usual thing?” he asked with a nod to the gun, closing the distance between them even more. “Scaring away predators?”

“Oh. Every now and then. I lost one last year.” She kept talking, kept looking at the man. Her gaze skimmed over a muscled chest, sculpted arms, over a tattoo on his upper right bicep that she couldn’t make out.

“Holly’s not much of a guard dog,” she went on. “But her hearing’s still good, so when her ears perk up I know something’s amiss. Were you coming to save me?”

“I didn’t know what I was coming to do, but I heard gunshots and—”

“And you came bounding over. I hope you didn’t um…scratch anything.”

Dallas glanced down, winced, then looked back up. “Nah. I’m good.”

Uh, huh. Well. She forced her attention up to his face and not on the dark boxers that hugged his thighs…annnnd… she was staring. How could she not?

But when her eyes finally met his she saw he was staring too. And it dawned on her that she was also barefooted and in her underwear. She tugged the tank top she slept in, stretching it until it covered the juncture between her thighs.

A cool breeze rippled over her and she shivered. Or maybe that was the man now just a couple of feet away giving her chills. What had she been about to say?

And when had he gotten so close? Or had she? Just an arm’s length apart now and she found herself imagining all kinds of things. Like what would she do if he moved closer? If he touched her?

The feeling changed like a coin flipping from heads to tails and even with the cool wind she felt hot. It was uncomfortable and also layered with a ripple of nervous excitement. Standing in her backyard at night with a man—this man. And both of them barely dressed.

When Holly barked from inside the back door, she glanced toward the house. When she looked back, the moment was gone. “Guess I should go back in. Holly’s probably worried.”  She shifted the gun hanging at her side.

“Probably so,” he said. “I’ll get myself back. Finish airing out the house.”

“Yeah. Maybe try another bag. Listen for the popping. More than a second between pops and it’s done.”

He still wasn’t moving and she swallowed hard. Had a ludicrous thought of asking him in. To make popcorn. To watch Downton Abbey?

He nodded toward her house. “I’ll wait until you’re inside.”

“Oh. Right. Thank you.” She turned, went inside, locking the door behind her. It’d been a long time since she’d been in the position for someone to care about her getting safely inside. She had to admit it didn’t totally suck.

Dallas Walker is haunted. He won’t ever forget the horrors he witnessed while working undercover to bust a human trafficking ring, but he has a plan to start a new life. Coming home to his family is step one. Getting to know his alluring new neighbor could be step two. If only she’d give him a chance…

Maggie Ellis just wants to be left alone. She’d rather spend her days spinning clay into art and feel nothing than open herself up to another devastating loss. But her sexy new neighbor with a lonely look in his eyes isn’t giving up. And he makes her question everything…

Together, Dallas and Maggie might have a shot at happily ever after. But only if they can let go of the past and hold on to each other when it matters most.

Claudia Connor is an award winning New York Times and USA Today bestselling author of Contemporary Romance, including the beloved McKinney Brothers series. Claudia writes, warm, heartfelt romances with a bit of steam, a lot of family and always a happily ever after.

Claudia attended Auburn University, where she received her undergraduate and masters degrees in early childhood education, and completed her studies in Sawbridgeworth, England. When she's not writing, she enjoys movies, reading, and travel, with a heavy dose of daydreaming during all three. Claudia lives near Memphis, Tennessee, with her husband and three daughters.