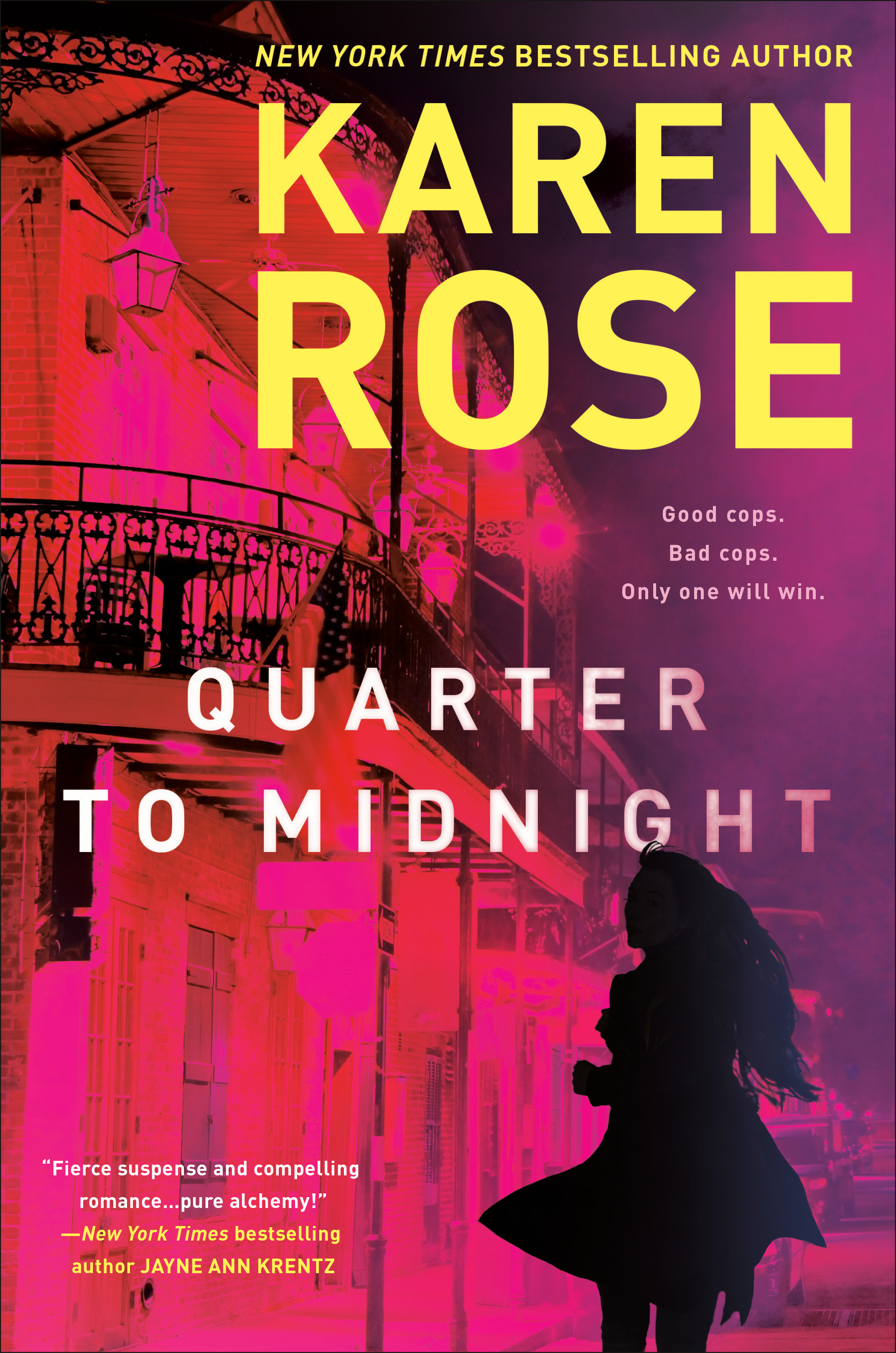 Quarter to Midnight (New Orleans #1) by Karen Rose
Publication Date: August 2nd 2022 by Berkley
Pages: 608
Source: Publisher
Rating: ★★★★
Links: Amazon | Barnes & Noble | Kobo | Goodreads
My Thoughts:
Gabe Herbert lost his father, Rocky, in an apparent suicide, but he isn’t buying it, but as he has no help from the police, he decides to go to Burke Broussard and his detective agency for answers.  What he uncovers is surprising and dangerous for all involved! His dad, a former cop, had been investigating a cold case for years, the murder of a woman during the chaos of Hurricane Katrina. Rocky had been stonewalled and threatened to drop the case or else and it seems like his persistence was finally paying off with answers. Unfortunately, he got too close and now Gabe is trying to connect the dots of his father’s investigation without dying or getting anyone else killed.
Molly Sutton has been drooling over Gabe Herbert every time she’d visit his restaurant. A gorgeous man who can cook?! Well, not many women could say no to that, but she never dreamed she’d be assigned to help him solve his father’s murder. Molly has lost family, so they bond easily over shared grief, their physical attraction growing as they work together. Even with all the mounting threats they were able to steal away here and there and savor what little precious time they had, steaming up the pages in the process!
Quarter to Midnight was 608 pages that just flew by! It was a fast paced, easy to breeze through read that kept me on the edge of my seat! Danger at every turn as the body count kept growing. I love Karen Rose’s brand of romantic suspense, so I was excited to hear she was starting a new series set in New Orleans! This vibrant, sultry location came alive through Rose’s talented writing. Can’t wait for the next one!
4 Stars

Molly looked up to find her boss standing in his office doorway. Burke Broussard was in his midforties and, other than a few silver hairs at his temples, hadn't changed a bit since he'd been her CO in the Marines a decade before. "Morning, Burke. I brought you coffee, too." She held up the cup.

"Thank the good Lord for that," he said fervently. "I've been here since six."

Molly shuddered in mostly mock horror. "Why?" She'd left rising with the sun behind when she'd finished her final tour with the Marine Corps. Burke, however, had a love-hate relationship with mornings. He said he hated them, but he continued coming in earlier and earlier. The man was a fool.

He was also smart as hell, driven to succeed, compassionate, and generous to a fault. But a morning fool.

"Come into my office," he said. "I have a new client you should meet."

Joy's eyes widened further, and she maneuvered her wheelchair so that she could unabashedly watch Molly walk into Burke's office.

And Molly immediately understood why.

Sitting in the chair at Burke's conference table was none other than Gabriel Hebert, Choux chef extraordinaire. He looked tired and tense and very unhappy.

She wondered if he'd been so unhappy the night before. He had looked tired, but not this unhappy. Of course, he might be one of those people who could put on the face they wished the world to see.

"Molly, this is Mr. Hebert. Gabe, this is Miss Sutton. I'm going to assign her to your case."

Molly's brows shot up. What?

Gabe's brows shot up as well, then crunched together in a disgruntled frown. "What? You're handing me off?" He came to his feet. "What the hell, Burke?"

The two men faced off, and they couldn't have appeared more physically different. Burke's skin was olive toned, his deep tan a testament to all the road biking he did in his spare time. Gabe was so lightly tanned that she might still call him pale. And, like a lot of redheads, he had a smattering of freckles across his nose.

She'd always wanted to trace those freckles with her fingertips. She'd wondered where else he had them.

Both men were tall, but Burke's body was bulky where Gabe's was lean. Molly loved to watch Gabe move. When he was cooking in his restaurant's kitchen, it was like watching a choreographed dance.

Only their accents were similar-both speaking with that smooth New Orleans drawl that sounded like hot summer nights with jazz music thick in the air. Except that Gabe's voice made her shiver, when Burke's never had.

She probably shouldn't have shivered at all, considering how angry he seemed, but her body couldn't help how it reacted. Sue me.

Burke waved at him to be seated. "I'm too close, Gabe. Your father . . . he was important to me, too. He was my partner. I had his back, and he had mine. Whatever else went down when I was on the force, I knew your father would stand by me, and he did. I don't know that I'd be able to keep an open mind."

Gabe did not sit down, his frown deepening to something almost dangerous. "Open to what?" he asked, each word dripping with anger and warning.

"The truth," Burke said simply. "Whatever it might be. Molly's my right hand. She will not let you down. Now, please, have a seat. If, after you've talked with her, you want someone else, we'll figure it out. Don't worry. You can depend on her discretion, no matter who you choose to work your case."

Gabe released a harsh breath. "Okay." He sat, then shifted his gaze to Molly, who still stood in the doorway, having not moved a muscle. He did a double take. "Do I know . . ." He trailed off. "Right. Last night. Happy birthday, Miss Sutton."

Burke looked between them, his expression suddenly unhappy. "You two know each other?"

"No," Molly said at the same time. "I've been to his restaurant a few times, that's all. The girls took me there last night for my birthday. I brought you some cake," she added lamely. "It's in the fridge in the break room."

"Thank you, Molly." Clearly relieved, Burke gestured to one of the empty chairs at the table. "Join us. As I'm sure you've figured out, this case requires extreme discretion."

Molly nodded. "I understand. Mr. Hebert, if you decide I'm not the best fit, there will be no hard feelings. But should you choose to work with me, I'll do my very best."

Gabe's shoulders slumped, his exhaustion clear to see. "I appreciate that." He swallowed hard. "I need to find out who killed my father."

Molly glanced at Burke. "Are the police involved?"

Burke sighed. "What he means is, someone in law enforcement might be complicit. Or responsible."

Molly sat back, wishing she was surprised. "All right, then. Let me have it."
Book Description:

There are good cops. And there are bad cops. The question is...who wins?

After completing her tours with the Marines in Iraq, Molly Sutton knew she could take down any bad guy she met. But when her law enforcement agency in North Carolina turned against her, she joined up with her former CO Burke Broussard, who left New Orleans PD to set up a private investigative service for people who couldn't find justice elsewhere.

Gabe Hebert saw the toll that working for the NOPD took on his dad and decided instead to make a name for himself as one of the best young chefs in the French Quarter. But when his father's death is ruled a suicide after a deliberately botched investigation by his former captain, Gabe knows his dad stumbled onto a truth that someone wants silenced.

Gabe goes to his father's best friend, Burke, for help. Burke assigns the toughest member of his team, Molly, to the case. Molly can't believe she's being asked to work with the smoking hot chef whose chocolate cake is not the only thing that makes her mouth water. Sparks fly as they follow the leads Gabe's dad left them, unraveling a web of crimes, corruption, and murder that runs all the way to the top.

About the author:
Karen Rose is the award-winning, #1 international bestselling author of twenty-five novels, including the bestselling Baltimore and Cincinnati series. She has been translated into twenty-three languages, and her books have placed on the New York Times, the Sunday Times (UK), and Germany's der Spiegel bestseller lists. Learn more at www.karenrosebooks.com.
Posted by Rachel @Waves of Fiction at 9:24 AM