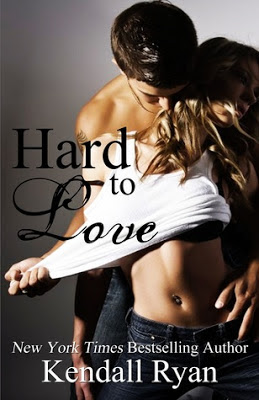 Cade takes cares of his sick younger sister by doing what he does best--cage fighting and starring in adult movies, his newest harebrained moneymaking scheme designed to pay for his sister’s growing medical bills. But when his latest gig finds him admitted to the ER sporting an erection from hell, thanks to the little pill given to him by the director, he can’t get the pretty little nurse who treated him out of his head, even though he knows she’s so far out of his league it should be illegal.

My Thoughts
Despite the title of this story, Kendall Ryan proves once again that her books are anything but hard to love. She definitely has a way of creating an addicting story that grabs my attention and keeps me hooked throughout the novel. I truly enjoy her writing!

In this story, we meet Alexa who is a nursing student with a rather pampered lifestyle. She’s caring but ever so cautious in her relationship choices. Cade, on the other hand, has had to struggle to just get by since he’s taken on the custody of his little sister Lily. Plagued with surmounting medical bills and the basic costs of raising a child, Cade has been forced to take a job that pays extremely well, but requires him to expose himself in more ways than one. These two meet one night when Cade is taken to the hospital where Alexa works after suffering from an occupational incident. These two realize an immediate attraction, but Cade’s career choices and bad boy image make it hard for Alexa to look past their differences.

If there’s one thing you can count on with Kendall Ryan, it’s that she has an ability to create characters with a ton of chemistry and some steamy moments that can fog your glasses. In addition, I love how she’s able to balance a good amount of conflict in her plot without making the story feel over dramatic. Ryan is great at crafting an entertaining story with the right amount of emotional pull and push.

In addition, with Hard to Love, I really enjoyed the secondary characters involved in this storyline. Lily was a perfect addition to the book which not only brought the two main characters together, but also exposed a gentler side of Cade that was endearing to witness. The way Alexa came to care for Lily was truly heartwarming. The only character I felt that was left hanging a bit was Tyson, so I’m wondering if Ryan has a spin-off intended just for him. His feelings for Alexa were clear, but they felt somewhat unresolved.

Overall, Ryan has proven once again that she has what it takes to deliver a solid romance with the right blend of chemistry and emotion. Enjoyed it much!
4 Suns