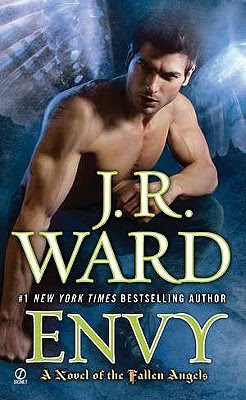 About the book
A man and a woman tread the lines of danger, desire, and deliverance in the new novel of the Fallen Angels from the #1New York Times bestselling author of the Black Dagger Brotherhood series.

As the son of a serial killer, homicide detective Thomas "Veck" DelVecchio, Jr., grew up in the shadow of evil. Now, on the knife-edge between civic duty and blind retribution, he atones for the sins of his father- while fighting his inner demons. Assigned to monitor Veck is Internal Affairs officer Sophia Reilly, whose interest in him is both professional and arousingly personal. And Veck and Sophia have another link: Jim Heron, a mysterious stranger with too many answers... to questions that are deadly. When Veck and Sophia are drawn into the ultimate battle between good and evil, their fallen angel savior is the only thing that stands between them and eternal damnation.


My Thoughts
Envy by J.R. Ward is the third installment in her Fallen Angels series and is a great sequel to this world that parallels the Black Dagger Brotherhood. BDB continues to be my favorite series by Ward but FA has quickly become a perfect fix while I wait for the next BDB book. However, as this series continues, I become more and more vested in Jim and Devina’s war of souls.

Devina has a slight advantage over Jim in this battle, which seems a bit unfair but in this particular installment he discovers her weakness, which I hope he continues to use to his advantage… as much as he can. I loved how Ward incorporated Nigel and Collin’s pairing. They captivate me and I always love to read their scenes. This book is perfect for me because it gives me those tidbit cravings of the BDB world, yet Fallen Angels truly is able to stand on its own.

In this particular installment, we meet Veck who was first introduced in BDB. He’s the son of a serial killer and Sophia from Internal Affairs is assigned to monitor with him. There’s an immediate attraction between these two, but their relationship is filled with all sorts of noise. When Jim moves in to save Veck’s soul, he soon discovers that Devina has had a long standing hold on him... so the battle gets quite messy. Throw in Jim’s desire to bring Sissy back to her family and the battle becomes intense!

Overall, I was pleased to see Ward capitalize on her strength, which is an action packed novel that never leaves the readers in need of suspense or action. Her books are packed to brim with tons of adrenaline, which is how I like my Ward served best. Next please!
4 Suns