Review: The Education of Sebastian by Jane Harvey-Berrick 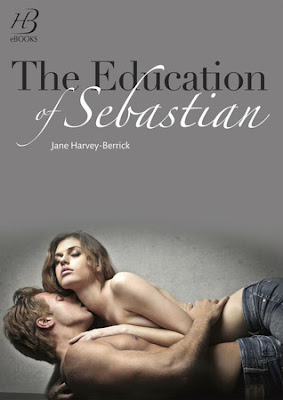 About the book
A friendship between the lost and lonely Caroline, and the unhappy Sebastian, leads to an illicit love that threatens them both.

Caroline Wilson is trapped in a cold and loveless marriage with an older man. When her husband finally wins a long sought-after promotion, Caroline feels she has little choice but to follow him to a new home in San Diego. There she meets Sebastian, a young man of 17.

For an all too brief summer, their happiness blooms.

But external pressures begin to bear down, not least from the overbearing David, and Sebastian’s parents begin to suspect that their son has a secret. Even Caroline’s new friend, Donna, realises that dark passions exist below the serene surface.


My Thoughts
“It's always been you, Caro. The first time I saw you, I thought you were the most beautiful girl that I'd ever seen... It's only ever been you.” ~Sebastian

Love.love.love this book!! Despite the emotional turmoil it put me through, The Education of Sebastian was truly one of the best reading experiences I’ve had in quite some time. As of late, I’ve noticed it’s taking me days and days to finish a simple book, so when I opened this novel and found myself easily captivated and truly immersed in the ePages, I knew it had nothing to do with finally finding the time to read in my hectic life and everything to do with falling into a story that held me captive until I was done with both books in this series. That’s over 1000 ePages of reading in less than four days which is quite rare for me as of late. I was completely entranced in this illicit love story between Caroline and Sebastian. Again I say… LOVE!

In this book, Caroline who is caught in a loveless and thankless marriage finds comfort in the arms of Sebastian. Their romantic affair is pegged with many challenges and the most obvious being his age. They attempt but fail miserably at keeping their distance from each other and as they continue to steal moments of passion, it only fuels the love they develop for one another and the possibility to be caught with sever ramifications.

Sebastian captured my heart completely. Despite wishing he was only a few years older, I have to say his character came off extremely mature, sincere and adoringly loving. It broke my heart to read about his family situation and how he was clearly mistreated. From the moment he entered the scene, he commanded the stage with his near perfect portrayal of sensitivity, loyalty and fierce ability to love despite the challenges his choices posed.

Caroline won my loyalty, but not without a significant case of reprimand. Her initial romantic interaction with Sebastian included some very poor assumptions that only led her to immediately regret her decision. I do wish she would have waited the few months she promised and found some sort of way to leave the loveless marriage she was in prior to her indiscretion. However, that would only label this novel as a perfect story and it’s not... The Education of Sebastian is flawed in so many ways and the author doesn’t disguise it any other way. So that only left me to accept these characters’ choices and hope they didn’t fully destruct when the implosion occured.

I feel one of the many reasons I fell for Sebastian and Caroline’s tumultuous love story was because I despised Caroline’s husband David, as well as Sebastian’s parents. They were worthless and downright awful, so it was no surprise that these two very caring and brave souls fell into each other’s arms. It doesn’t make their choices right by any means, but it made them a bit more palatable for me regardless.

The ending of this book absolutely broke my heart and I was in near hysterics. So needless to say, I immediately downloaded the second book and continued this whirlwind of a story, completing something of this magnitude in record time. However, I must warn you to not make the same mistake I made. I was so distraught at one point in book one that I had to go looking for the sequel to have it at the ready. Well, I made the mistake of reading the description of book two and that screamed SPOILER! ~face palm~

Overall, The Education of Sebastian was a beautiful story about two broken souls who find solace in each other despite society, family and friends potential discrimination. Regardless of the challenges they face, they try to find a way to make it work and plan for a future they can only hope to achieve. This story grabbed my heart and spun my emotional compass in all sorts of directions. Well worth the time and emotion I vested in this reading experience.
5 Suns

Posted by Waves of Fiction at 1:00 AM