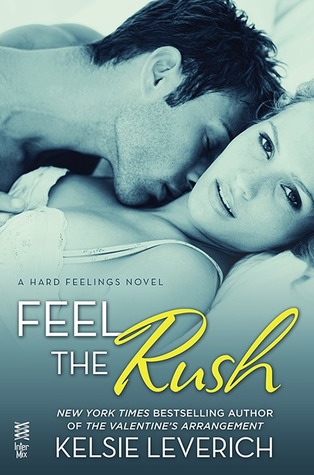 Picking the wrong men is a talent Meagan Mitchell has perfected. She’s sweet, confident, beautiful—and single. With her thirtieth birthday sneaking up on her, she needs a new plan. No more Mr. Wrongs or Mr. Bads, it’s time to find Mr. Safe…

Army Captain, Reed Porter, lives for the thrill—he’s an Airborne Jumpmaster with a rush addiction. He’s sexy and playful, and he quickly tempts Meagan with his rich Southern drawl and sinful looks. But slowing down and settling down are not in his agenda, making him exactly the type of man Meagan wants to avoid…

As their undeniable attraction heats up, Meagan has to decide if she’s willing to risk everything on a chance at love with a reckless charmer. Is she brave enough to bet her future—and her heart—on Mr. Thrill? Or will Reed finally learn that the feeling of a safe landing is just as addicting as the rush of the fall?

Oh my! Feel the Rush was everything I love in a contemporary romance and in just the right amounts!

Meagan is turning thirty and thought she’d be married with kids by now, but with a string of sex only relationships, it hasn’t worked out that way.  With her clock ticking she swears off her usual type: “Mr. Bad, Mr. Sexy, and Mr. Unavailable” and is determined to find “Mr. Safe” so she can settle down and have the husband and family she wants.  When she moves in next to Captain Reed Porter, an adrenaline junky and Jumpmaster for the army, her resolve to stick to her plan weakens.  He’s everything she should stay away from. He’s the kind of guy who lives in the moment without a thought for the future.  Yet, Meagan finds herself drawn to Reed. He’s fun, flirty, and sexy as hell, and she can’t deny the intense attraction she feels every time he gets near.  And Meagan swoons every time he calls her “sugar” with that sensual Southern accent!

Reed has only lived life in the moment, enjoying it as much as he can, because he knows it could be gone in a second.  But as he gets to know Meagan, he becomes more and more attached to her and soon he can’t imagine a life without her in it.  But Reed knows what Meagan wants from life and he isn’t sure he can give it.

“I know I’m no good for you, baby,” he breathed as he pressed his mouth to her ear. “But I want you. I want you so fucking bad it’s selfish.” Her spine straightened as he used the force of his own body to pin her in place. “You do something to me that twists me up.”

This romance had humor, sexy banter, sweet moments, fiery hot scenes, and just the right amount of angst to tug at your heart and make the make-ups so much sweeter. Did I mention it was hot?! Hot with a capital H! Whoa!  Yet this story was about more than sexual attraction.  Meagan faced the realistic and painful dilemma of falling for a man that didn’t share the same life goals as her.  However, in the case of Reed, sometimes it just takes the right person to come along to awaken unknown desires. The fact that Reed was so very sweet and open minded about Meagan and her life plan, set him apart from the usual main male character I find in so many romances I pick up, attached to their no commitment status.  Meagan and Reed were relatable characters, and I instantly liked both of them.  I could easily understand  each of their sides. They never made over the top irrational or frustrating decisions that would sour you on their character, but that’s not to say there weren’t bumps in the road.  Just ones you could get over.

Kelsie Leverich wrote a realistic and swoony romance with an ending and epilogue that will make your heart soar with joy!  This is my first novel by Ms. Leverich, but it won’t be my last and I will definitely be continuing the series: Pretending She’s His  centers on Trevor and Eva, Meagan’s best friends.

Click on title for Goodreads link for the Hard Feelings series:

The publisher has generously provided a Paperback copy of Feel the Rush to giveaway to one lucky reader.  The giveaway is open to US residents only.  Simply fill out the rafflecopter for a chance to win!  Good luck and thanks for stopping by!