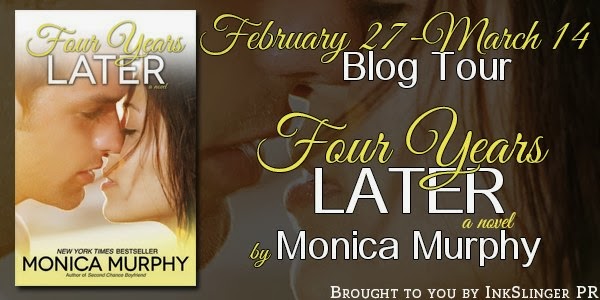 I'm a huge fan of Monica Murphy so I'm excited to be part of the blog tour for Four Years Later the 4th book in the One Week Girlfriend series which I absolutely love! Four Years Later was amazing!  This tour is hosted by Inkslinger PR and you can see a complete tour schedule at the bottom of this post.  As part of my stop I have my review and a wonderful giveaway so be sure to scroll down to the bottom of the post to enter for a chance to win. 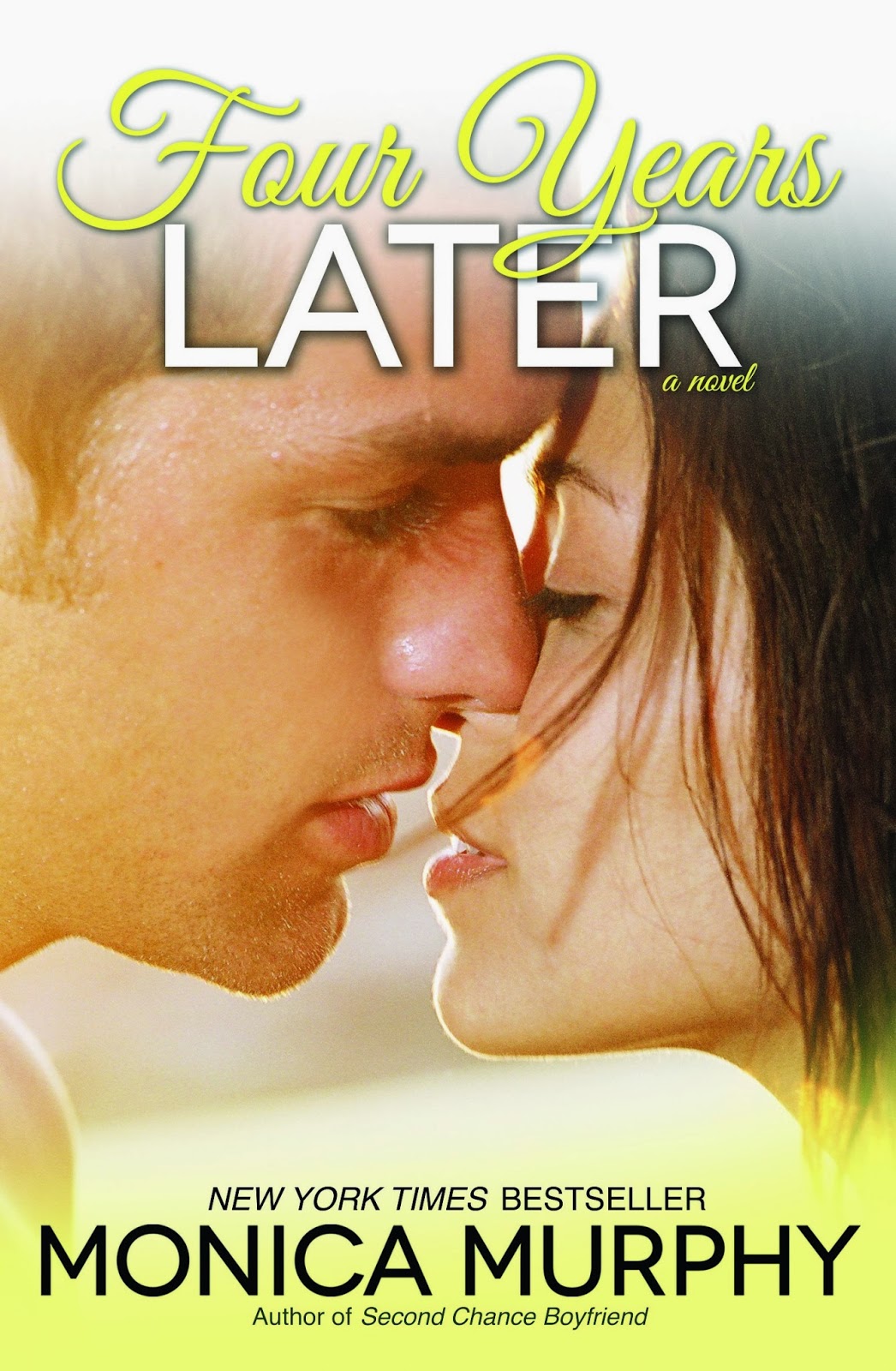 New Adult bestselling author Monica Murphy winds up her sensational series with this sexy story of two college kids with nothing in common but a bunch of baggage and a burning attraction.

Over. That about sums up everything in my life. Suspended from my college football team and forced to cut back my hours at The District bar because of my crappy grades, I can’t keep turning to my sister, Fable, and her pro-football playing husband, Drew, to bail me out. I just can’t seem to find my own way. Weed and sex are irresistible temptations—and it’s messed up that I secretly hand over money to our junkie mom. A tutor is the last thing I want right now—until I get a look at her.

Chelsea is not my type at all. She’s smart and totally shy. I’m pretty sure she’s even a virgin. But when she gives me the once over with those piercing blue eyes, I’m really over. But in a different way. I won’t deny her ass is killer, but it’s her brain and the way she seems to crave love—like no one’s ever given her any—that make me want her more than any girl I’ve ever met. But what would someone as seemingly together as her ever see in a screwed up guy like me?

I love the One Week Girlfriend series with Drew and Fable as the main characters, but my heart went out to Owen, Fable’s younger brother who was so young when their mother abandoned them. He was sweet and oh-so-protective to Fable.  With Four Years Later we get Owen and Chelsea’s story which was emotional, and gratifying.

Owen and Chelsea are thrown together when she’s assigned to tutor him.  Owen has let his grades slide and he’s in danger of being kicked off the football team if he doesn’t catch up and get his act together.  Chelsea and Owen are quite the opposites on the outside: Owen is the popular, carefree football star, and Chelsea is the naïve, brainy overachiever.  And yet, these two have an intense draw to each other.  Oh, I do love it when the nerdy, smart girl gets the hunk-a-licious guy! And Owen and Chelsea have far more in common than they realize.

Owen has his junkie mother who drops by when she needs money for drugs, always taking his self-esteem down several notches with each visit. She is an absolute horror of a mother, and I wanted to shake Owen for allowing her in his life. Yet, at the same time, I couldn’t help but feel sorry for Owen giving in because his inherent need to gain approval, and love from her.

Chelsea has a mother who alternately hates or loves her husband, Chelsea’s father; a man who has always put his own needs and desires before his wife and daughter’s. Her parent’s roller-coaster marriage and her father’s incarceration have left a mark on Chelsea.

This romance was full of tension and longing!  Owen was such a goner for Chelsea he didn’t want to muck things up.  He was determined to do things right and be patient with Chelsea being so inexperienced and innocent.  I loved how Owen drew her out of her shell and made her crazy with desire. This made for some lusty and intense scenes!  I was thrilled that Chelsea made Owen want to clean up his life and get rid of any bad influences. They really brought out the best in each other.

Fans of Drew and Fable will not be disappointed as they make appearances with oh-so-cute baby Autumn! Their HEA continues to fill my heart with joy.


Monica Murphy has another win with Four Years Later.  Owen and Chelsea’s story was touching and passionate, and is sure to make you sigh in contentment by the end.

New York Times and USA Today bestselling author Monica Murphy is a native Californian who lives in the foothills below Yosemite. A wife and mother of three, she writes New Adult and contemporary romance for Bantam and Avon. She is the author of One Week Girlfriend and Second Chance Boyfriend.

As part of this tour we have a SIGNED set of The Drew+Fable Series.  The giveaway is INTERNATIONAL! Good luck!