Review: Tempted by the Soldier by Nicolette Day 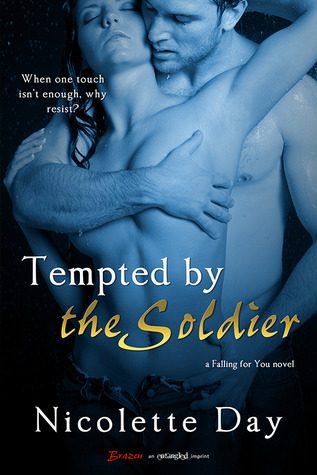 When one touch isn’t enough, why resist?

Road trips are supposed to be fun. Or, at least, full of hot sex. For photographer Lilly Grayson, the fifteen-hour drive to her friend’s wedding with Nate Jennings will be neither. Not that Nate isn’t sexy—the man is six-foot-three-inches of mouth-watering Marine. But Lilly’s been there, done that…and he walked away. Now it’s time for a little payback. The kind that’ll make a man desperate for a taste of what he can’t have.

And Nate wants a taste—so badly that he can barely keep his hands on the wheel. But the scars and ghosts of his last tour still haunt him. He can’t give into temptation, not this time. Lilly deserves a whole man—one who can love her the way she deserves to be loved, even if she doesn’t believe it can happen. And that can’t be Nate. Not when he’s leaving again in two weeks, and this time, he’s not sure he’ll return…

Have you ever had a romance/connection you feel so intensely, and you were sure he felt the same, only to have it crash and burn?  That’s a BIG knife to the heart! Ouch!  And it’s exactly what we have in Tempted by the Soldier.  No worries though, this is a second chance romance.

One year ago, Lily had one of the best nights of her life with Nate only to be humiliated and hurt come morning.  She’d rather have a root canal than spend fifteen hours in a truck with him, but things are really not going her way in this case.  Faced with missing her best friend’s wedding or catching a riding with Nate, she must put aside her feelings, suck it up, and take the trip.  Lily will just have to save her murderous plans for after the wedding!

Nate gave into a brewing attraction with Lily one year ago and the intense feelings she drew out in him made him run. Nate is still reeling from survivor guilt after a horrible helicopter accident, and he doesn’t feel worthy of Lily or entitled to any happiness she might bring.  He re-enlisted in the Marines and is set to go back on duty in just two short weeks, so he knows he must keep his distance in this road trip.  A road trip he knows is sure to stretch his will power and control to the limits.

By now you all know I’m a huge sucker for a second chance romance.  When you’ve had your heart broken by someone that you think is “the one” and then have the chance to make it work again, it’s like a dream come true.

Lily was so heartbroken by Nate she’s determined to torture him and show him what he passed on a year ago, and I was rooting for her to teach him a lesson, until I had Nate’s side, as misguided as it was.  The verbal sparring back and forth was great fun, and raised the heat between Nate and Lily to scorching levels!  Some of the scenes when they inevitably give in…whoa! HOT with a capital H!

“What do you want?”
His eyes flickered down to the towel, then he dropped his hand and pushed his way into the bathroom, forcing her backward until her bottom hit the edge of the counter. He braced his hands on either side of her hips, caging her in.  Her breaths kicked up a notch—matching the frantic beating of her heart.
“You,” he growled.

But there was a tender side to each of them as they discovered each other’s history, bonding them together.

Nicolette Day masterfully blended the tender and emotional with the spice, making this romance a satisfying and touching story.  There is a novella, No Strings Attached, about Lily’s best friend Hayden and Nate’s brother Jace, set before this story and I plan on picking it up. We get a peak at these two and I’d like to see how their romance started.  Both of these stories are only .99 cents on the sites I’ve linked above, a steal of a deal!

Brandie's Thoughts:
A surprisingly sweet, romantic, and emotional novel. I quickly fell for Lilly & Nate and their story. This book is full of wit and snarky humor, with just enough erotica not to be overdone and take away from the importance of the story. This book is more about two people learning to forgive themselves for past circumstances that were out of their control, so that they could have a life they both deserve with love and hope for the future. I was really touched by their story and the pain they both were fighting to survive.

Lilly needs a ride to her best friend’s wedding, due to horrible weather cancelling her flight. She ends up hitching a ride with Nate – the groom’s brother, and her former fling. A year prior, Lilly and Nate had hooked up, only for him to never give her the time of day again. She felt a connection to him and is still harboring feelings she can’t seem to let go. Angry from his silence the past year, she is determined not to fall for him again.

Nate is a marine who has suffered some terrible losses in his life. He lives with the guilt and pain weighing on him heavily every day, and doesn’t feel worthy of anyone’s love and understanding. As a favor to his brother and future sister-in-law, he agrees to give Lilly a ride. He hasn’t forgotten the night they spent together, nor has he stopped wanting Lilly for a minute. But his past and the pain he’s dealing with keeps him from getting close to anyone.

On their road trip, there are some hilarious moments, and some really HOT moments. While Nate is struggling not to give in to his attraction to Lilly, he finds it extremely hard to stay away from her. And as they stop along the way, Lilly starts to see a different side of Nate and that maybe there’s more to him than just the asshole that slept with her and never called again.

What surprised me most about this story was that it was more than just sex and humor. Both Lilly and Nate have real pain and issues they are dealing with and it results in some of the most tender and heartbreaking moments. I loved their relationship and was cheering them on, hoping they could get past the barriers keeping them from committing to each other.

Nate is a beautiful broken man you can’t help but adore. When you find out what he’s been through, you can understand why he pushes Lilly away, and it’s commendable. All you want is to see the poor guy get his happiness. It tugged on my heart.

Although this book was predictable, it didn’t make it any less enjoyable. A beautiful love story that I’m glad I read!