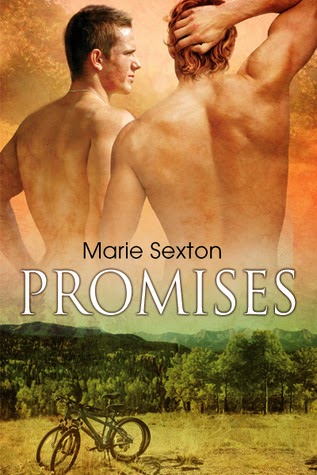 Jared Thomas has lived his whole life in the small mountain town of Coda, Colorado. He can't imagine living anywhere else. Unfortunately, the only other gay man in town is twice his age and used to be his teacher, so Jared is resigned to spending his life alone. Until Matt Richards walks into his life, that is. Matt has just been hired by the Coda Police Department, and he and Jared immediately become friends. Matt claims he is straight, but for Jared, having a sexy friend like Matt is way too tempting. Facing Matt's affair with a local woman, his disapproving family, and harassment from Matt's co-workers, Jared fears they'll never find a way to be together-if he can even convince Matt to try.

My Thoughts
Well if reading this book in one sitting is any indication to how much I enjoyed Jared and Matt’s story, then there you have it! I was glued to the pages from the beginning and before I knew it, I stumbled upon the final chapters. Promises was both heartfelt and engaging, and falling for these two characters was simply too easy.

In Promises, Jared has lived in Coda, Colorado all of his life. He works with this sister-in-law in the family business and enjoys the solitary moments that have become his norm. When the town hires a new police-officer, Jared becomes fast friends with the newcomer. Matt has lived his life in constant battle with his overbearing father, and has only managed to be a disappointment in his family’s eyes. However, when he comes to Coda and meets the Thomas family, he learns what family and friendship is truly about.

From the beginning, I have to admit that I fell head over heels for the Thomas brothers. I loved how they handled their relationship and took care of the ones they love. Most of all, It was great to see how Brian and his mom embraced Jared’s choices. This book truly proved that family and friends are the heart of all that matters. It was fulfilling to see Jared and Matt becomes close friends to the point that Jared helped him come to grips with some hard choices. Their relationship had its fair share of obstables, but the way they handled them felt both realistic and rewarding.

This story was filled to the brim with heart. The emotional moments felt real and never over-dramatic, which made it easy to connect with the characters on many levels. I loved Marie Sexton’s novel Promises, and I’ll be sure to seek out more of her stories. Great novel!!
4 Suns