Review: With or Without Him by Barbara Elsborg 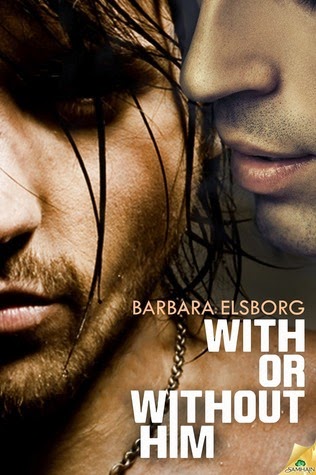 "The most dangerous refuge could be his lover's arms. "

Everyone has at least one deep-seated fear. For Tyler, it's being in debt. He's so desperate to get out and stay out of it, he'll do almost anything-including selling his body at Saturday night sex parties.

But he refuses to open his mind to anyone, especially the men paying to use him however they want. The only time he's truly happy is during the week at college, when he can escape into his music.

The moment Haris sees Tyler playing piano at a concert, he falls hard, and he's willing to do whatever it takes to make the guy his. Even if it means-for the first time in his life-opening his wallet as wide and desperate as his heart.

20,000 to live with a good-looking guy for four months? How can Tyler resist the chance to ditch the sex party scene for good? But neither man realizes how much they're risking. And when outside forces close in, ready to destroy them, the trickiest part about the next four months could be just surviving.

My Thoughts
Hot, sexy, sad, seductive, funny, emotional... It was my everything... Love!!!
I’ve been a fan of Barabara Elsborg since I stumbled uponStrangers a while back. She has a way of creating an attractive and alluring cast, and most of that is built from the chemistry and how she mixes and matches the right characters together to leave a lasting impression. With or Without Him has been on my mind for days!! I loved this book to pieces, and Tyler and Haris have engrained themselves in my heart and my brain!

Tyler Bellamy is a twenty-one year old music student who has already amassed a significant amount of debt putting himself through school. Because of his difficult past and the scars he’s endured, the last thing he wants is to owe money… to anyone. So he’s resorted to taking a job with the seedy Prescott selling himself and his body. When one of his jobs gets out of hand and he finds himself gagged and bound in a deviant event gone wrong, one wordless plea to a mysterious spectator is all it takes to know his world is about to change.

Harris has lived a quiet life with little to no attachments, and all of that is due to his past and how he’s suffered because of his choices. Trust doesn’t come easy to him, but he definitely has honed his skill where instinct is concerned. However, when he stumbles upon Tyler one night as a musical event and follows him that evening, Haris is thrown off his game and finds himself in a situation that leaves him second guessing his actions, feelings and reactions.

Overall, I loved these two characters together!! I could feel the chemistry between Tyler and Haris fall off the pages of my eBook! As much as I didn’t care for how they came together, I really have to give it to Elsborg for creating a situation that fostered the right amount of drama and emotional pull. There were moments when I felt Haris pushed things too far, and Tyler was ready to walk away. Those scenes pulled at my heart strings and made me fall even harder for these two.

What I loved most about Elsborg’s writing in this book was the dialog. I’m a HUGE HUGE fan of word play and witty conversations, and Elsborg sure knows how to play that to her strength. With or Without Him is no exception. The playful banter and sexy moments between these two characters was off the charts!

With or Without Him is probably my favorite book from Elsborg’s collection so far, and I can’t wait to pick up another novel by this author. She writes the kind of stories that stick with me and stay on my mind for quite some time. Love.love.love...
4.5 Suns

Email ThisBlogThis!Share to TwitterShare to FacebookShare to Pinterest
Labels: 4.5 suns, arlene's review, barbara elsborg, with or without him