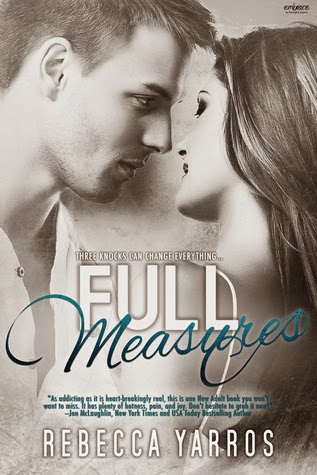 Three knocks can change everything…

"She knew. That’s why Mom hadn’t opened the door. She knew he was dead."

Twenty years as an army brat and Ember Howard knew, too. The soldiers at the door meant her dad was never coming home. What she didn’t know was how she would find the strength to singlehandedly care for her crumbling family when her mom falls apart.


Then Josh Walker enters her life. Hockey star, her new next-door neighbor, and not to mention the most delicious hands that insist on saving her over and over again. He has a way of erasing the pain with a single look, a single touch. As much as she wants to turn off her feelings and endure the heartache on her own, she can’t deny their intense attraction.

Until Josh’s secret shatters their world. And Ember must decide if he’s worth the risk that comes with loving a man who could strip her bare.

My Thoughts
Very emotional and truly heart-felt story. Loved the characters in this novel!

In Full Measure, December Howard’s life changed the day she decided to open the door early one morning to a knock that ultimately turned her life upside down. That’s when the US Army brought the fateful news that her father was killed in combat. As her world falls apart around her, she takes center stage at keeping her family together since her mother retreats into a catatonic state leaving her to care for her little brother and teenage sister. She transfers to a closer university, takes on the household; and if things weren’t bad enough Ember breaks up with her boyfriend when she finds out he’s been unfaithful.

What else can this poor girl handle? Well thankfully Josh Walker tends to be at the right place at the right time when Ember needs someone to lean on.

Ember has pined for him since her freshman year in high school, when she was a quiet but confident girl and he was the star hockey player. Five years later, their paths cross and she finds herself struggling to keep her emotions in check. What she doesn’t know, though, is how deeply he’s been a part of her life since she left for college.

Full Measure by Rebecca Yarros brings to light the pain and struggle military families battle with when they lose someone they love. The honesty and integrity of Yarros’s writing leaves nothing unturned when it reveals how some families might feel about the war and the costs that come with sending our troops to fight in foreign lands. I’d love to read more novels that are this bold and honest.

It’s refreshing to know some authors don’t mind reflecting and writing about those families that aren’t willing to sacrifice their loved ones for a war that doesn’t make much sense to them. Brutally honest!

I have to say that for the first few chapters I was on the verge of tears for the entire time. I can’t imagine going through what Ember did and Rebecca Yarros did a great job at conveying the right emotions and reactions to make me feel in the moment and truly vested. Very well written novel with that added sense of honesty that has me applauding Rebecca Yarros. ~claps enthusiastically~
4 Suns

Waves of Fiction 2015 Reading Challenge
- Read a book with a military theme. The Secretary of the Army has asked me to express his deep regret that your husband, Justin, was killed in action in Kandahar, Afghanistan, earlier this morning, the nineteeth of December...
Posted by SarleneS at 2:00 AM