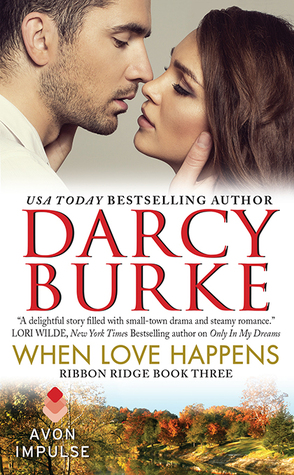 When Love Happens by Darcy Burke
Published on May 26th, 2015 by Avon Impulse


About the book
Tori Archer is married…well, on paper anyway. She hasn’t actually seen her husband since the disastrous morning after their impulsive Vegas wedding. The memories of their intense passion may still make her weak in the knees, but Tori knows their marriage was a mistake.

After six months filming abroad, television producer Sean Hennessy wants nothing more than to track down his sexy, captivating wife and get her into bed… fast. So when his boss sends him to Oregon to persuade the famous Archer sextuplets—the former stars of a reality TV show—to do a reunion special, Sean sees the perfect chance to win Tori back.

Only, Tori wants nothing to do with him and is determined to push him away. But their attraction is as hot as ever and Sean will do anything to prove their relationship was more than just a fling…because he knows that when real love happens, it changes everything.

My Thoughts:
I have been out of the romance game for awhile now and honestly I was a little scared to jump back in.  My tastes have drastically changed in the last few months and romance just hasn't interested me, but When Love Happens is a perfect example of what an author can do for a reader.  Darcy Burke has renewed my faith in romance and shown me what I have been missing!

Tori and Sean engaged in a whirlwind 5 week romance that ended in a quickie wedding in Vegas.  That same night though tragedy struck and Tori runs home leaving Sean and their newly marriage behind.  After six months Sean, having no other options, goes to Tori to try and save his job and also to see what might be left of their relationship.  He isn't ready to throw in the towel and knows things won't be easy because sometimes a heart can't relearn love no matter how hard you try.

I fell into this story with ease. The writing kept me engaged and I truly enjoyed each and every character.  What I thought was fascinating was the Archers.  Yes they were rich and yes they were all driven, but they weren't perfect.  They each had their own flaws some being bigger than others and honestly it was nice to not read the "they have it all and some" storyline.  I liked the edge the author gave this family.  I did get a bit confused at times because there were just so many of them, but I still really loved them all.  For me they took center stage.  Tori and Sean had a very nice storyline, but I was totally captivated by this family and I know I will definitely pick up the previous books because I have not had enough of them.

As I said Tori and Sean had a really good storyline.  I liked the whole reality show storyline because yes I admit it I am a reality show junkie, but what I really enjoyed was just them.  It was exciting to see how Tori reacted to Sean and I rooted for them from the beginning.  Sometimes I could take or leave the main couple in romances, but not these two.  I wanted Tori to forgive herself and let Sean in and I wanted Sean to give everything and more to Tori to remind her of what they once were.

This was a fast and fun read that left me wanting more from the whole crew.  I am thoroughly captivated by this author and her writing and I can't to find out how the rest of the Archers find their HEA's!