Review: The Chemist by Stephenie Meyer 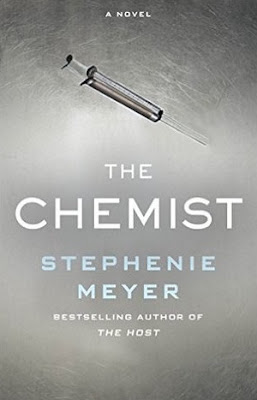 She used to work for the U.S. government, but very few people ever knew that. An expert in her field, she was one of the darkest secrets of an agency so clandestine it doesn't even have a name. And when they decided she was a liability, they came for her without warning.


Now she rarely stays in the same place or uses the same name for long. They've killed the only other person she trusted, but something she knows still poses a threat. They want her dead, and soon.


When her former handler offers her a way out, she realises it's her only chance to erase the giant target on her back. But it means taking one last job for her ex-employers. To her horror, the information she acquires only makes her situation more dangerous.


Resolving to meet the threat head-on, she prepares for the toughest fight of her life but finds herself falling for a man who can only complicate her likelihood of survival. As she sees her choices being rapidly whittled down, she must apply her unique talents in ways she never dreamed of.

My Thoughts
Well that was a pleasant surprise!!

Having been a fan of the Twilight Series (minus the final installment), as well as, The Host, I was somewhat excited to see what Stephenie Meyer cooked up in her recent adult drama release The Chemist.  After plowing through this adventure-packed novel, I have to give credit where credit is due. Meyer definitely has a knack for creating a story that leaves you no other option but to feel a vested interest in her characters and their adventure.

In The Chemist, we meet Juliana Fortis who works for a secret agency that circumvents terrorist attacks on American soil.  Her background is chemistry and research, which is used during interrogations on suspected terrorists to disclose possible threats to our safety by using chemical and creative torture techniques.  When the agency suddenly turns their attention to Juliana and begins to see her as a liability because of the knowledge she’s acquired, she flees for her safety. After three years on the run and several attempts on her life, she knows that being over-prepared is the only way to survive.

When the same agency that is trying to eliminate her calls on her for a final job as a trade for her freedom, she accepts the assignment in the hopes of finally getting her life back. However, as she dives into the assignment, it proves to be more complicated and sinister than what she initially believed, and now she has an additional liablity on her shoulders that she feels compelled to protect.

I really liked how Meyer decided to develop her characters in The Chemist. It was quite different than what she’s done in the past. In this novel, Juliana or rather Alex (her alias for most of the novel) is the strong heroine that is both wickedly clever and surprisingly strong. She’s able to hold her own throughout the book despite the physical and mental punches she takes from her adversaries. Daniel Beach is a nice complement to Alex’s hard edges and unbreakable strength.  It was interesting to see how Meyer chose to make Daniel a bit more breakable and vulnerable and Alex the force to be reckoned with.

The Chemist also has its fair share of tender moments. And let’s be honest with ourselves… If Stephenie Meyer wants you to swoon over a guy, she’s going to put the right words in his mouth, and he’ll deliver his magic through the pages. Call me a sucker, but I fell for this sweet guy and his poetic confessions.

“I see a woman who is more… real than any other woman I’ve ever met. You make every other person I’ve known seem insubstantial, somehow incomplete. Like shadows and illusions… I’ve never been drawn to someone the way I am to you, and I have been from the very first moment I met you. It’s like the difference between… between reading about gravity and then falling for the first time. “ ~Daniel

“It feels like I’ve been waiting a century to do that. It’s like time has lost continuity. Every second with you outweighs days of life before I met you.” ~Daniel

Overall, it was great to see Meyer try her hand in a new genre. Having published YA Paranormal and Adult SciFi, The Chemist is a nice complement to her literary resume as she tackles Adult Drama/Suspense in a way that makes the transition appear seemless.  I always enjoy seeing authors take risks with their craft, and Meyer did so in a noteworthy way.  Well done Meyer… well done…