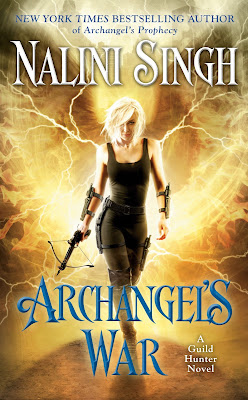 My Thoughts:
The Guild Hunter series quickly became a favorite last year when I binge read all the Elena/Raphael books. The romance between Elena and Raphael has been electric and all-consuming, an epic love! They’ve come a long way over the series, and I love that they face each trial thrown their way together as a united front.   This is a series that needs to be read in order, the Elena/Raphael books, at any rate. The others center on other couples and can be read on their own, IMO.  While this is book twelve in the overall series, Archangel’s War is the seventh Elena/Raphael book.

I think fans will find this an exciting installment especially after the brutal cliffhanger we had with the last book.  I know I was anxious to dive in and see how everything turned out! I think this book is better if you can set aside a chunk of time to really dig in and read.  I had to stop and start a lot because of real-life and I think it impacted the flow a bit in the beginning. I don’t think I can comment on the plot much, because anything I said would be a spoiler, but I will say Archangel’s War was exciting, full of change and danger! Ancients awakening, joining the fray, and an epic battle that’ll have you worried for the fate of our favorite characters.

Loved learning more background on Illium “Bluebell” and his mother, Sharine “Hummingbird”, Aodhan with them. Izzy, Elena’s beloved “baby” angel and her younger sister Eve all have part in Archangel’s War. We even get a little more of Raphael’s mother, Caliane; her history and a bit of Raphael’s childhood, too. Also, more was revealed about The Legion, and I really have enjoyed seeing them evolve into more than just a uniform sort of collective with the help of Elena.

My review feels so lacking, because it’s impossible to say much that isn’t a spoiler, but it’s more than just the “read it!” I wanted to go with initially, so there is that!

“We watch,” the Primary said. “We protect.”
But things were altering in front of them, a faint glow emanating from where the aeclari had been before the filaments obscured both Raphael’s body and Elena’s chrysalis.
Beyond the balcony doors now partially covered with the snow silk of the filaments, the Bluebell turned. His eyes widened at seeing the ocean of filaments, the glow. But before he could open the closed doors, a familiar voice entered all their minds.
Leave now. It was an order from an archangel. Clear the skies above. Empty the land around. GO.
The Legion were moving even as the last word echoed in their minds. They were Raphael’s Legion, Elena’s Legion, and they had been given an order. The Bluebell wasn’t Legion. He was one of the Seven. Unique. With his own mind.
Torment wrenched his features, but he inclined his head, and the Primary saw him form the word, “Sire.”
All of them moved.
The Bluebell dropped to the grass, then ran inside the house.
The Legion broke into four parts and swept the area. Winged beings were already flying toward the river at high speed, their faces stark and their jaws determined. The Legion dropped down in front of cars moving on the nearest road. The cars were not so close to the aeclari’s home, but the archangel hadn’t said how far to clear.
When the first two cars halted with a screech that caused a burning scent to rise to their nostrils, the Legion wrenched the doors open and hauled the startled vampires out. A group of the Legion rose into the air, two to a vampire. Another group found four humans in a third car, a vampire’s cattle heading home. The scared cattle whimpered at being taken by the Legion but didn’t struggle. Neither did the vampires after they saw the angels racing from the Enclave to the water.
Golden light poured out from the windows of the aeclari’s home.

Many of the angels streaming over the water held vampires or humans in their arms, getting their households out of danger. The Bluebell was one of the last to fly out of the Enclave, and though the Legion did not speak to many outside of the aeclari, they spoke to him: Are the aeclari’s people safe? This was important. The Legion knew. The aeclari had bonds to those who lived in the house.

Yes, I got them out. The Bluebell, who could fly faster than the Primary and sometimes raced with the cars of the Blade and the Viper, fell off the cliff with his wings licked by a golden light so bright that it was difficult to face. In one hand, he held a large rectangular thing, in his other items they recognized.
Several of the Legion flew to him, and took the things. They did not understand things, but these were linked to the aeclari in their mind. We will fly them to the Tower.
Most of the angels kept on flying toward Manhattan, and those of the Legion that carried vampires or mortals kept on going, too. But the Primary turned once he was over the center of the river, as did those of his brethren who flew only their own bodies.
The Bluebell halted in front of them, the silvery blue of his wings spread and his face awash in the burning golden light that had turned the river to gold.
And the light, it grew, and grew, and grew.
Until at last, the light was so bright that it became fire and even the Primary couldn’t bear it and threw up his arm in front of his eyes. The last thing he saw was an intense white brightness.
© Copyright 2019 by Nalini Singh