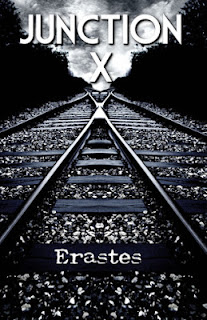 About the book
Set in the very English suburbia of 1962 where everyone has tidy front gardens and lace curtains, Junction X is the story of Edward Johnson, who ostensibly has the perfect life: A beautiful house, a great job, an attractive wife and two well-mannered children. The trouble is he's been lying to himself all of his life. And first love, when it does come, hits him and hits him hard. Who is the object of his passion? The teenaged son of the new neighbours. Edward's world is about to go to hell. "Both a haunting tale of sexual obsession and a stunning portrait of an ordinary man caught up in the throes of an illicit love and teetering on the brink of self-destruction, told with pinpoint psychological insight and mouth-watering prose, this is a splendid example of the storyteller's art, reminiscent of James Baldwin." - Victor J. Banis, author of The Man from C.A.M.P.

Oh wow! I imagined a dozen different endings for how this book would tragically end, but never that. Definitely not that!

Among the sea of novels I've read over the years that have sadly begun to blend, I’d like to thank Erastes for creating a story that has managed to carve a mark in my memory. To forget Junction X, as well as Edward and Alex in the next few months would be impossible because of the impact they had on my emotional psyche. I will warn you up front that I won’t provide great detail on this book because as I’ll explain later, the power of this novel should be experienced firsthand.

What I will do is set the stage a bit for Junction X. This is a flawlessly written novel that’s told in the first person by Edward Johnson. He lives in the suburbs of 1962 England with all the luxuries of life surrounding him, including a wife and two children along with the white picket fence cliché. His existence couldn’t be more complete, yet there’s a steady yet visceral dissatisfaction that’s buried deep in Edward that begins to manifest itself when Alex comes into his life. What he thought was love has suddenly begun to redefine itself as he explores his emotions and feelings for another.

Erastes has masterfully weaved a tale about forbidden love, inevitable tragedy and hopeless moments that felt both real and borderline perfect. There wasn't one moment where I condoned any of actions that took place in this novel, but the manner in which the story was told, I felt like I was under a spell walking toward the inevitable tragic ending. The feel of impending doom that lingered didn’t prepare me for what actually transpired.

To provide additional elements about this story, I would risk exposing the hidden secrets a reader must experience on their own. Junction X is both a journey and a destination that would be thwarted with a needless road map of explanations and detail. I jumped into this novel with very little background and I wouldn't have it any other way. So I’ll leave the details where they belong – wrapped in the binding of this masterfully told story by Erastes. I won’t forget… that’s for sure.
5 Suns