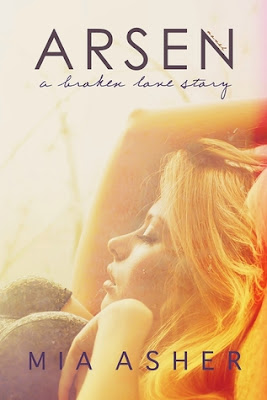 One glance was all it took…

One makes love to me. The other sets me on fire.
One is my rock. The other is my kryptonite.

I'm broken, lost, and disgusted with myself.

But I can't stop. This is my story.
My broken love story.


My Thoughts
Wow! Arsen truly threw me for an emotional tail spin! I was not expecting to feel such conflicting turmoil after reading this heartbreaking story. It’s taken me a few days to gather some thoughts and feelings for this novel and its characters, so here’s hoping it’s not a rambling mess.

First, let me just say hats off to Mia Asher for an explosive debut! Set aside the subject matter, this author surely knows how to pen a story that will tear your heart out with deliberately slow precision and leave you speechless for days. After finishing her novel and contemplating it for days, I have to give it to this author because she really messed with my emotions! Take a bow Mia Asher. You deserve it!

I’m not going to even try to sugarcoat this bad boy. Arsen is Cathy’s story as she takes us on her self-destructive journey that ended her marriage to probably one of the most perfect fictional husbands I have ever met. See Cathy and Ben had been trying to have a baby for years, and after her fourth and final miscarriage, she makes a choice to destroy herself and Ben when she chooses to throw it all away for Arsen.

The dynamics between all three characters was nothing short of incinerating! There were moments in this book where I had to put down my eReader to just walk away and catch my breath. To see someone self-destruct, and witness the aftereffects was not only visceral but mind blowing. I tried to separate my emotions from the ongoing slaughter, but clearly that wasn’t possible. As I consider each character in this novel, I’m still amazed at how deeply I came to feel for their situation. However, I’m not quite sure if those feelings were positive or negative. I even took the time to deliberate the difference between sympathy and empathy to come to some sort of conclusion as to how I truly felt. In the end, I can simply sum up my feelings to being emotionally spent and psychologically tattered.

Cathy
“You can’t expect to play with fire and not get burned. I did, and now I’m incinerated. The thing is I wanted to be. I still do.” ~Cathy

I kept wondering if I was supposed to loathe Cathy to some degree. I don’t know if I was, but I can tell you with certainty that I didn’t hate her one bit. The empathy I felt for her was off the charts because I could not even imagine going through what she went through and come out whole in the end. I didn’t under any circumstance condone her actions, but as I witnessed this character self-destruct in the only way she could control her demise, I felt horrible for her.

I found myself searching furiously for a reason behind her choice and I can see how easily it would be to miss the deep seeded anger and resentment she had towards Ben. Being married to the perfect husband when she herself felt so inadequate and broken left her making choices that guaranteed her destruction. With Arsen, she was able to be angry and resentful, with him she could breathe again. You can’t deny someone the air they need to breathe, but that doesn't minimize the error in the source.

Arsen
“She makes me so damn happy… I live for these moments when she’s with me; when the world is left outside this room and the only person that matters is right here next to me.” ~Arsen

I had a hard time taking him seriously at first. He immediately came off as the young, reckless fireball that carelessly went after someone he should have steered clear of. His determination to take what wasn’t his to take compounded after every interaction he had with Cathy. His confrontations with Ben were both disrespectful and cringe-worthy. However, there was a moment when he had the stage and we were able to witness his inner demons and true feelings that my defenses started to topple. From beginning to end, Arsen had me conflicted, and I couldn't quite put my arms around how I should feel about it aside from pity.

Ben
“I don’t want tomorrow to come, Cathy.” His voice is hoarse with pain and he pleads.

Ben… oh Ben… What can I say about his character that was just too sweet for his own good? It was clear that heartbreak was inevitable for Ben, and I just stood there as a complicit bystander and hoped he wouldn’t be completely destroyed. I can see why people adored this character, but for me I was too busy feeling sorry for him to muster any sort of anger on his behalf. His journey from beginning to end had me feeling helpless on his behalf.

Overall, Asher did a phenomenal job with her debut novel. Her writing is flawless and her ability to draw you into her world rivals only the best. She managed to create three very real characters that not only ripped my heart to shreds but left me pining for more. Who does that? Well done Asher… Well done!
4.5 Suns

Try - P!nk
Just Tonight - The Pretty Reckless
Like a Knife - Secondhand Serenade
Never Be the Same - Red
Posted by SarleneS at 3:00 AM