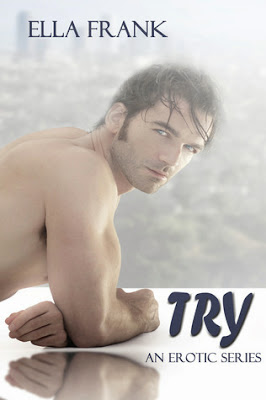 Try – verb: to make an attempt or effort to do something or in this case…someone.

Sex. Logan Mitchell loves it, and ever since he realized his raw sexual appeal at a young age, he has had no problem using it to his advantage. Men and women alike fall into his bed—after all, Logan is not one to discriminate. He lives by one motto—if something interests you, why not just take a chance and try?

And he wants to try Tate Morrison.

Just coming out of a four-year marriage with an ex-wife from hell, a relationship is the last thing on Tate’s mind. He’s starting fresh and trying to get back on his feet with a new job at an upscale bar in downtown Chicago.

The only problem is, Tate has caught the unwavering and unwelcome attention of Mr. Logan Mitchell – a regular at the bar and a man who always gets what he wants.

Night after night Tate fends off the persistent advances of the undeniably charismatic man, but after an explosive moment in the bar, all bets are off as he finds his body stirring with a different desire than his mind.

As arrogance, stubbornness and sexual tension sizzles between the two, it threatens to change the very course of their lives.

Logan doesn’t do relationships. Tate doesn’t do men. But what would happen if they both just gave in and…tried?

My Thoughts
What a HOT treat!! My first book by Ella Frank and she’s hooked me. She’s definitely an author that can catch my attention and steam up my glasses in one quick punch! Try was filled with captivating characters, dialogue and romance that just wouldn't quit. Loved it from beginning to end.

In Try, we meet Tate who is just getting out of a messy relationship that’s ended in divorce. As a bartender, his good looks and lighthearted banter attracts just about every patron at the bar where he works. His motto is ‘Be flirtatious with the ladies and friendly with the men, and obviously, never cross too far over the line.’ Logan on the other hand has always been the carefree playboy that takes what he wants without remorse. His agenda is simple, ‘Try a sample, take the goods, and then come out on top. Never let things get messy.’ When these two collide one night at the bar, it’s not only a battle of wills to see if Logan can convince Tate to try something different, but also a high-charged game of attraction mixed with conflicting emotions between these two opposites.

I really liked these two characters from the beginning for very different reasons. I loved Logan’s careless attitude and unrelenting confidence. Tate on the other hand seemed to flounder and fall at every turn. Being faced with a decision of whether or not to enter into another relationship and much less with a guy was not something he took lightly. I appreciated how he handled his conflicting emotions and enjoyed how Logan just wouldn't quit. When they finally crossed the line, it was exciting to see these two come together. [No pun intended] Their chemistry was undeniable, and it just exploded off the pages!

Overall this book is a TEN when it comes to chemistry and red hot moments. However, it’s the characters that bring Try to life. Logan and Tate might just give my other favorite MM couple a run for their money. Great book and I’m so glad I gave this one a TRY !
5 Suns