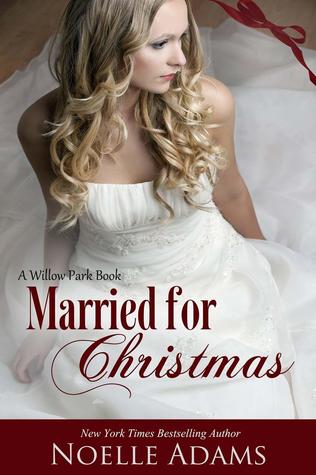 After years of dreaming, Jessica is finally getting married, but the marriage isn't exactly what she thought.

Daniel is her best friend, and she's known him all her life, but he's never gotten over losing his wife two years ago. His dream is to become the pastor of the church in their hometown, but the small-town congregation keeps balking over calling an unmarried minister. Since Daniel needs a wife and Jessica wants a husband and family, she proposes an arrangement that benefits both of them.

Jessica can be practical about this marriage. She knows what she's getting into, after all...

This book includes fully-developed sex scenes between a husband and wife.


My Thoughts:
Married For Christmas tugged at my heartstrings and had me a little teary in parts.

Twenty-eight year old Jessica Cameron wants a husband and a family and is tired of waiting. She’s been in love with her best friend Daniel for quite some time and she has a plan that will hopefully gives both of them what they want and need. She doesn’t think Daniel views her in a romantic light, in fact he doesn’t seem to be interested in anyone since the tragic death of his wife two years earlier, but being married would give him a better chance at a job he wants: a pastor in their small home town of Willow Park.

When Jessica proposes and Daniel accepts she’s extremely happy, but knows that this isn’t a conventional marriage. This one will be missing the romance that a typical marriage would stem from, because this is more of an arrangement or partnership she’s getting into. Jessica thinks she’s okay with that, and figures Daniel could never love someone as much as his deceased wife.

When reality sets in Jessica realizes that Daniel has managed to wedge himself into her heart more than she expected and now she can’t help to wish for the impossible: that Daniel could love her just as much.

Oh my heart ached for Jessica through a lot of this book. Daniel is honorable and makes his best efforts to be a good husband, but I seriously wanted to shake him a few times. As the book progressed you start to have suspicions that Jessica’s wishes might be fulfilled. Little things Daniel did or said would make you hope that Jessica was wrong in her assumptions. He could be so very sweet one minute, but then pull away the next. I will say things were smoking hot between these two and in spite of being ticked at Daniel more than a few times he was very concerned about making sure he took care of Jessica, if you know what I mean! Here’s a quote that might tempt you:

His lips trailed down her neck again, this time descending to her collarbone. “So beautiful,” he murmured. “You’re so beautiful, Jessica. I can’t seem to get enough of you.”*

This was a short and sweet romance that was filled with some heartbreaking angst, but it more than made up for it as the story wrapped up. I was on cloud nine over the way things ended with a HEA any romance junkie will swoon over!

There is some religious aspect to this romance with Daniel being a pastor, but it wasn’t preachy nor did it overwhelm or detract from the story. I found the values Daniel and Jessica tried to adhere to, very lovely.

This is the second Noelle Adams book I’ve read and I just love her writing. Can’t wait to read the second one of this series, although I’m not sure who it will focus on, maybe Micah, Daniel’s brother?

A copy was provided by Patchwork Press through Netgalley in exchange for an honest review.

*Quote taken from an uncorrected proof and may change in the final copy.
Posted by Rachel @Waves of Fiction at 4:00 AM