Today I'm part of the Blog Tour for the first in Kristen Proby's new series: Loving Cara (Love Under the Big Sky #1).  This tour is hosted by Inkslinger PR. Thanks for including us!  For my stop I have a review, plus and awesome INTERNATIONAL giveaway! So be sure to scroll down so you have a chance to win! 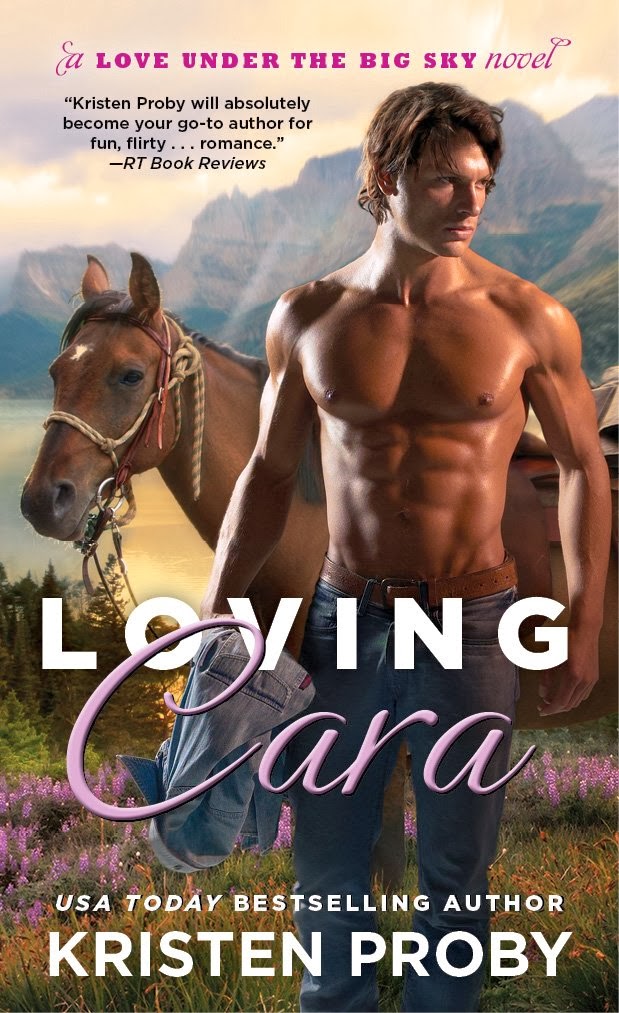 In this new Love Under the Big Sky series from a USA TODAY bestselling author, Cara agrees to tutor her former classmate's nephew—and learns some lessons in love!

Josh King is an expert at running his family’s multi-million dollar ranch in Montana. (And all that outside manual labor has done wonders for sculpting his six-foot-three body, too.) But as sure footed as he is when it comes to the ranch, Josh doesn’t know anything about how to deal with an adolescent boy—so when his twelve-year-old nephew, Seth, is dropped off on his doorstep, looking scared and acting surly as hell, Josh knows he needs help in straightening him out.

Cara Donovan loves her quiet life as a teacher in her sleepy hometown, so she jumps at the chance to make a little money over the summer as a tutor. But when she learns she’ll be teaching Josh King’s nephew, Cara’s sweet summer job gets a little bit hotter. Cara tries to focus all her attention on tutoring Seth, but Josh proves to be a delicious distraction, while Josh’s memories of the shy girl he once teased in high school are nothing like the beautiful woman he’s facing now. Can he persuade her that there’s more between them than a summer fling?

Loving Cara was a sweet small town romance with plenty of spice. Oh, how I’d love to live on a beautiful Montana Ranch. Well, as long as it came with a hot rancher like Josh!

Cara went to school with Josh and Zack King who are identical twins.  Josh was the type to tease and pull her hair while passing in the hallways, but nothing ever became of it other than Cara having palpitations every time she saw him. Cara thought Josh never looked at her twice, with her being the chubby, frizzy haired girl growing up.  Now that Cara’s all grown up and a school teacher, she gets a job tutoring Seth, Zack’s twelve year old son at the King’s ranch for the summer.  Seth has been dropped off like a sack of potatoes by his horror of a mother, Kensie, and with Zack still in the army Josh is left with his care until his brother can get back.

The old fluttery feelings Cara used to have for Josh come flooding back when she sees him, and with tutoring Seth everyday in Josh’s house, those feelings become so much stronger.  Luckily for Cara, the attraction is mutual and before you know it Josh and Cara are hot and heavy, and can’t keep their hands off of each other.  Cara must battle her feelings of insecurity; she’s not sure what Josh sees in her.  Is she just a summer fling? And Josh for his part is confused by his fast and intense feelings for Cara. Can he trust these emotions when they've come on so quickly?

This romance was relatively angst and drama free which was a relief to me. That’s not to say there weren’t bumps in road, but they were short lived and handled pretty quickly.  Both characters were mature and completely devoted.  With that said I had a hard time connecting with this romance. I would’ve liked a little more buildup before these two were constantly going at it like rabbits.  I didn’t really get why Josh was suddenly crazy for Cara and couldn't get enough of her when he had made no moves on her in the past with them living in the same small town for years.  Plus, it seemed like Josh and Cara were going at it every other page.  Don’t get me wrong, I love my spice just as much as the next girl, but I like a little more story to go with it.

I did enjoy this story and the setting was lovely.  I've always dreamed of living in a small beautiful ranch town like this one in Montana. Maybe that’s because I usually picture some sexy cowboys sauntering through! The setup with the secondary characters has me excited for companion stories.  The teaser in the end for Ty and Lauren’s story was really good!

A copy was provided by Pocket Books in exchange for an honest review. Thank you!

About the Author: KRISTEN PROBY is the USA Today bestselling author of the popular With Me in Seattle series. She has a passion for a good love story and strong characters who love humor and have a strong sense of loyalty and family. Her men are the alpha type—fiercely protective and a bit bossy—and her ladies are fun, strong, and not afraid to stand up for themselves. Kristen spends her days with her muse in the Pacific Northwest. She enjoys coffee, chocolate, and sunshine. And naps. Visit her at KristenProby.com.

1-signed copy of LOVING CARA and 3 e-Copies of LOVING CARA for one winner during the Blog Tour. This is an International giveaway, so YAY! Simply fill out the rafflecopter for a chance to win! Good luck!