Review: Reviving Izabel (In the Company of Killers #2) by J.A. Redmerski 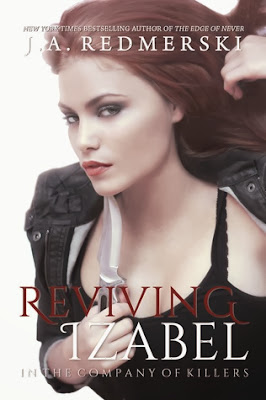 Reviving Izabel (In the Company of Killers #2) by J.A. Redmerski
Published December 6th 2013

Determined to live a dark life in the company of the assassin who freed her from bondage, Sarai sets out on her own to settle a score with an evil sadist. Unskilled and untrained in the art of killing, the events that unfold leave her hanging precariously on the edge of death when nothing goes as planned.

Sarai’s reckless choices send her on a path she knows she can never turn back from and so she presents Victor with an ultimatum: help her become more like him and give her a fighting chance, or she’ll do it alone no matter the consequences. Knowing that Sarai cannot become what she wants to be overnight, Victor begins to train her and inevitably their complicated relationship heats up.

As Arthur Hamburg’s right-hand man, Willem Stephens, closes in on his crusade to destroy Sarai, she is left with the crushing realization that she may have bitten off more than she can chew. But Sarai, taking on the new and improved role of Izabel Seyfried, still has a set of deadly skills of her own that will prove to be all she needs to secure her place beside Victor.

My Thoughts
Wow! Where do I start???

Well, first off… THAT WAS TWISTED AND SEXY WICKED!!

Reviving Izabel takes place about 8 months after Killing Sarai when Victor leaves Sarai in Arizona in the hopes of starting a new and normal life. However, a normal anything just doesn’t quite fit into Sarai’s agenda especially when she has a score to settle with Hamburg back in Los Angeles. So she packs her weapons bags and puts her reckless plan into motion.

What made this novel especially captivating was that we didn’t have to wait too long for Sarai to make some deadly mistakes before Victor shows up and saves her from Hamburg’s lynch men. From the moment he enters the scene the chemistry, action and adventure are turned up to full momentum! I loved the different side of Victor that we got to see in this installment. However, there’s an event that occurs at the final hours of the book that really threw me off. I don’t quite know if I’ve forgiven all the parties involved, but that didn’t take away from how I already fell hard for Victor.

As Victor trains Sarai to be a killer and he makes promises to help her execute her revenge, we come face to face with some of Victor’s buddies. I loved meeting Fredrik! He was twisted and morbid and despite not being able to read his torture scenes and never EVER being able to look at a dentist chair the same way again, I was captivated by this dark and mysterious character. I could definitely read a whole book on Fredrick! Great addition to the cast!

I still wasn’t quite sold on Niklas, especially considering his part at the end of the novel. Despite the valid yet questionable reasons for what he did, I still wanted to knock him out! The way the ending unfolded was a real punch in the gut. No recovering from that one!

Overall, the pacing of the novel is fast and furious with kicks and bullets flying in from all angles. Riveting story that makes J.A. Redmerski’s other stories feel like Disney novels! Loved it!
4 Suns