Review: Fire Inside by Kristen Ashley 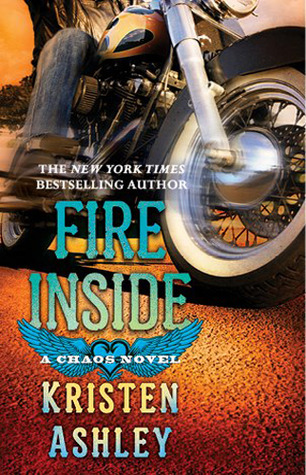 Lanie Heron isn’t looking for love—no surprise, considering her last serious relationship nearly got her killed. So when Lanie propositions Hop Kincaid, all she wants is one wild night with the hot-as-hell biker who patrols with the Chaos Motorcycle Club...

For Hop, Lanie has always been untouchable. She’s too polished and too classy for his tastes. But when she gives Hop the once-over with her bedroom eyes and offers him a night in paradise, he can’t say no. And he doesn’t regret it when he finds that Lanie is the best thing that’s ever happened to him—in or out of bed. Now the trick will be to convince her of that.

I seriously want to be a biker babe!  Loved this one!  Kristen Ashley reads are like my comfort food of romance. I always know I can sink and just enjoy! *sigh*

Lanie hasn’t had the best luck in the romance department.  Her sad story was detailed in Motorcycle Man, Tyra and Tack’s book, but there’s a good enough recap in Fire Inside that you don’t absolutely have to read it first. However, I do highly recommend it.  Lanie had a man she loved, Elliot. Unfortunately, he tied himself to the Russian mob and they ultimately took him out.  Lanie, was caught in the crossfire, ended up barely surviving, and emotionally scarred. Seven years later and that ugliness still holds Lanie back.

Lanie keeps her walls up; shielding herself from the pain she still isn’t past. Over the years as Tyra’s best friend, Lanie’s been to countless Chaos cookouts and gatherings, so she’s seen Hopper Kincaid, one of Chaos Motorcycle Club’s badass biker guys, around and in a moment of weakness, she lets her guard down and spends the night with him. An unforgettable night! What is supposed to be “just one night” turns into a lot more than she bargained for.

I loved Lanie! She had class, and like most Kristen Ashley heroines, she had sass! Even though I didn’t agree with her pushing Hop away when they started out, I could totally understand why. Plus, she wasn’t completely stubborn to the point of frustrating, giving in incrementally to what she started to recognize as true and right.

Not a huge fan of his name, but it would be hard to resist someone like Hop.  He was hot, possessive, and protective (yes, standard KA Alpha male!), but also funny and laid back when the time called for it. Once Hop discovers the sweet softness in Lanie, he doesn’t want to let go. Hop was patient, determined to break down her walls, and make things permanent.

“Let you in on a secret, babe, and you think on this,” he told me. I was not going to think on anything. “Hop…get…off…me,” I snapped. His body pressed into mine so he could lift his hands up to frame my face. “I’m already in. Just gotta wait for you to realize it.”

Things didn’t always go smoothly and there were some heartbreaking setbacks, one particularly in the end.  How is it KA always manages to make me cry?! No worries though because as usual I can always count on an awesome epilogue with HEA! *sigh* I love the range of emotions stirred up!  Even though I LOVED the way Fire Inside ended the drama with Benito is far from over and I’m a little nervous for what Chaos MC will be facing in the future.

A copy was provided by Forever through Netgalley in exchange for an honest review. Thank you!

Posted by Rachel @Waves of Fiction at 6:51 AM