Review: Always You by Missy Johnson 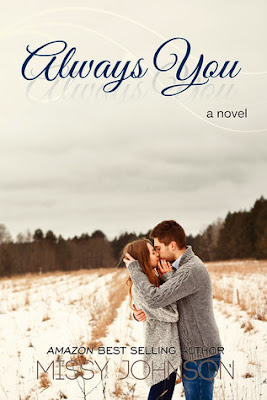 I was thrilled when I was offered a graduate teaching position at the prestigious Tennerson Girls Academy. At twenty-three, this would be my first ‘real’ teaching assignment. Working at the elite boarding school, home to the daughters of some of the wealthiest people in the world, was a great opportunity that I would’ve been stupid to pass up.

One week into my new job, and I suddenly had no idea why I chose high school…I was a seventeen year old boy once, I knew how teenage girls behaved.

You can’t even imagine the hell of trying to teach thirty, hormonal driven seventeen year olds who have been cooped up, away from any male contact.

I could handle the whispers every time I entered the room. I could even handle the obvious attempts at gaining my attention. What I couldn’t handle was her…

Rich bitches and way too many rules. Was it any wonder that I hated school?

Add to that the lack of male contact, and I was going insane. Like literally. I wasn’t used to this. A year ago I was normal. I had a boyfriend, friends and a loving family. There is nothing normal about me anymore, and nobody here lets me forget that.

My name is Wrenn, and I’m only here because my aunt took me in after what happened, but my aunt also happens to be the headmistress of this academy…Can you see my problem?

Then he arrived. Dalton Reed. My new history teacher.

Slowly, he helped me see that even in the worst situations, there is always hope.

My Thoughts
Liked it much! Heartfelt story with perfect characters that were easy to fall for.

After a tragic accident that leads Wrenn to live with her aunt, the headmistress of Tennerson Girls Academy, she’s forced to adjust to a completely new life style, make new friends, and hope to survive a semester at the academy. Entering as a senior with only eight weeks of course work left before starting college, the girls at Tennerson find every opportunity to make Wrenn’s transition a difficult one. She’s kept her heartbreak that led her to live with her aunt a secret, but when the new teacher begins his assignment at the school, all of Wrenn’s well laid plans and carefully guarded secrets are about to be exposed.

Dalton is commissioned to teach at the same academy for eight weeks, which turns out to be a living hell having to deal with hormonal teenage girls that quickly devise plots and rumors that just might damage his career. Meeting Wrenn and establishing a strong connection with his student doesn’t help his cause either and they soon find themselves with a difficult choice.

Overall, I really liked Always You! The characters blended well and the alternating perspectives allowed a deeper insight into Dalton and Wrenn’s feelings and frustrations. Where there were a few predictable moments, it was gracefully balanced with a plot that masterfully weaved the past and present into a solid storyline, and carried a few surprises and twists along the way. I liked how Dalton’s backstory was gradually unveiled and how it played a significant part in the end.

As much as it would have made a TON of sense for Wrenn and Dalton to hold off on their heated romance until after he finished his assignment and she graduated… we’re talking a mere six weeks total… I still enjoyed their stumbles and falls that ultimately proved they were meant to be. And plus, where’s the fun when all the players follow the rules? I like flawed choices with realistic consequences thank you very much!

For readers that might be put off by a student/teacher relationship, I will tell you now that the age difference was narrow. She’s eighteen and he’s twenty-three, but most importantly there's a past connection between these two that unveils and helps it all come together. This is by no means a spoiler, since it's carefully presented in the prologue. Also, I know I tend to harbor feelings for characters that push the envelope, but I assure you that Dalton and Wrenn are the least controversial couple I’ve come across in this category. :)

Lastly, I have to applaud Missy Johnson on forgoing the ultimate Happily Ever After with one of her final character choices. It felt real, slightly tragic but ultimately hopeful. Johnson proved that not every story should be tied with a pretty ribbon and can still end right. Well done!
4 Suns