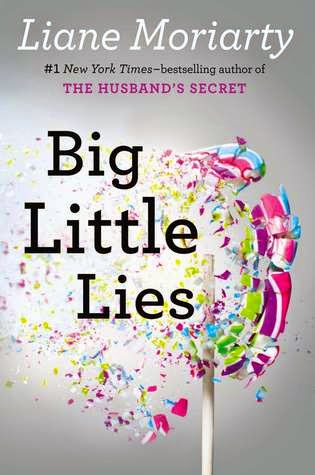 Check out the #1 New York Times bestseller Big Little Lies by Liane Moriarty, called “a surefire hit” by Entertainment Weekly.
Sometimes it’s the little lies that turn out to be the most lethal. . . .
A murder… . . . a tragic accident… . . . or just parents behaving badly?
What’s indisputable is that someone is dead. But who did what?
Big Little Lies follows three women, each at a crossroads: Madeline is a force to be reckoned with. She’s funny and biting, passionate, she remembers everything and forgives no one. Her ex-husband and his yogi new wife have moved into her beloved beachside community, and their daughter is in the same kindergarten class as Madeline’s youngest (how is this possible?). And to top it all off, Madeline’s teenage daughter seems to be choosing Madeline’s ex-husband over her. (How. Is. This. Possible?).
Celeste is the kind of beautiful woman who makes the world stop and stare. While she may seem a bit flustered at times, who wouldn’t be, with those rambunctious twin boys? Now that the boys are starting school, Celeste and her husband look set to become the king and queen of the school parent body. But royalty often comes at a price, and Celeste is grappling with how much more she is willing to pay. New to town, single mom Jane is so young that another mother mistakes her for the nanny. Jane is sad beyond her years and harbors secret doubts about her son. But why? While Madeline and Celeste soon take Jane under their wing, none of them realizes how the arrival of Jane and her inscrutable little boy will affect them all.
Big Little Lies is a brilliant take on ex-husbands and second wives, mothers and daughters, schoolyard scandal, and the dangerous little lies we tell ourselves just to survive.


My Thoughts
She wanted to tell him that she knew all the perfect little lies he'd told himself for all those years, because she'd told herself the same lies. She wanted to enfold his trembling hands between her own and say, "I understand."

I have a bit of history with Liane Moriarty and I trust her as the pilot to my fictional journeys. In her latest novel Big Little Lies, she spares no expense on weaving a masterful tale of three women that lead completely different lives, yet find a way to embrace the difficulties of every day existence.

This book makes me want to take inventory of my friendships to make sure I'm watching out for my girls.

Madeline is probably the character I resonated with the most. She sharp-witted and unabashedly honest and forward. She commands a crowd with her presence and opinion. However, the difficulties of raising a teenage daughter with an ex-husband that abandoned her really pulled at my emotions. I loved her current husband Ed and how he handled this spit-fire of a women. Together they were a mighty force! Loved her!

Jane I had to handle with kid-gloves. I knew her past held a dark secret that was responsible for the slightly damaged present day young mother, but I loved her determination to get up every day and just try.

Celeste was absolutely consuming in her own way. Her perfect little lies that hid her reality were heartbreaking, and I hoped from the moment that I discovered them that someone would see through her veil of protection.

The way Moriarty weaved time and place with three distinctly different stories was absolute perfection. I was consumed from beginning to end. Next story, please...
4 Suns