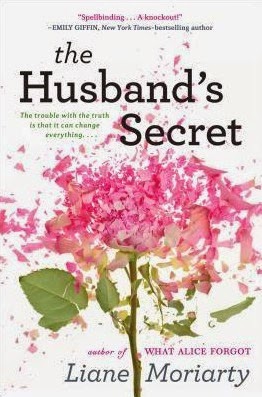 My darling Cecilia, if you’re reading this, then I’ve died...

Imagine that your husband wrote you a letter, to be opened after his death. Imagine, too, that the letter contains his deepest, darkest secret—something with the potential to destroy not just the life you built together, but the lives of others as well. Imagine, then, that you stumble across that letter while your husband is still very much alive. . . .
Cecilia Fitzpatrick has achieved it all—she’s an incredibly successful businesswoman, a pillar of her small community, and a devoted wife and mother. Her life is as orderly and spotless as her home. But that letter is about to change everything, and not just for her: Rachel and Tess barely know Cecilia—or each other—but they too are about to feel the earth-shattering repercussions of her husband’s secret.

Acclaimed author Liane Moriarty has written a gripping, thought-provoking novel about how well it is really possible to know our spouses—and, ultimately, ourselves.

My Thoughts
“They gave Pandora a box. Prometheus begged her not to open it. She opened it. Every evil to which human flesh is heir came out of it… The last thing to come out of the box was hope. It flew away.” ~Kurt Vonnegut

Cecilia Fitzpatrick is the perfect example of a super-mom. She runs a successful business, is involved in all three of her daughters’ school activities, and she is the epitome of efficiency for her family and friends. The biggest burden she has on her shoulders when we meet her in The Husband’s Secret is satisfying her daughter’s thirst for information about the Berlin Wall. So when Cecilia heads up to the attic to retrieve an artifact of the event, she stumbles upon a letter that is clearly written by her husband, who is away on business. The letter is old and tattered… sealed in an envelope with strict instructions on the front to be opened only in the event of his death. Well, as the saying goes:

Oh, Pandora. Where’s your willpower? You were told not to open that box, you snoopy girl, you typical woman with your insatiable curiosity; now look what you’ve done.

Because what Cecilia doesn’t know is that by exposing herself to the contents of letter, she will forever change her family’s life, as well as her own, AND the lives of Rachel, Connor, Tess, Will and several other people that are connected in a way they would never suspect.

I first came across Liane Moriarty when I read her novel What Alice Forgot, and I remember thinking what a crafty writer she is to be able to weave events, people, thoughts, and drama in a delicate way that captivates me as a reader. The Husband’s Secret is no exception. As with my first encounter, I re-discovered how skillful Moriarty is at blending a unique cast into a very character driven novel. Despite following three varying story lines that are clearly on different trajectories, Moriarty seamlessly merges small events, inconsequential encounters and slow reveals to deliver a gut wrenching punch when she’s done with you.

From the moment I read the first chapter, I could not put this book down! The novel is completely consuming, emotional and absolutely riveting. To watch the events unfold, I felt like I was in the passenger seat of a high speed car ride that took turns and twists leaving me dumbfound at the junction. By the time I was toward the end of this novel, I was completed vested in these characters’ lives and the epilog put the nail in the coffin... I was floored!

Overall The Husband’s Secret is a provocative novel about loss, choices, consequences and heartbreak... Throughout the story, I constantly asked myself, “Does one act define who you are forever?” I can’t wait to pick up another book by Moriarty. She clearly knows how to dazzle me!!

View all my reviews
Posted by SarleneS at 3:00 AM